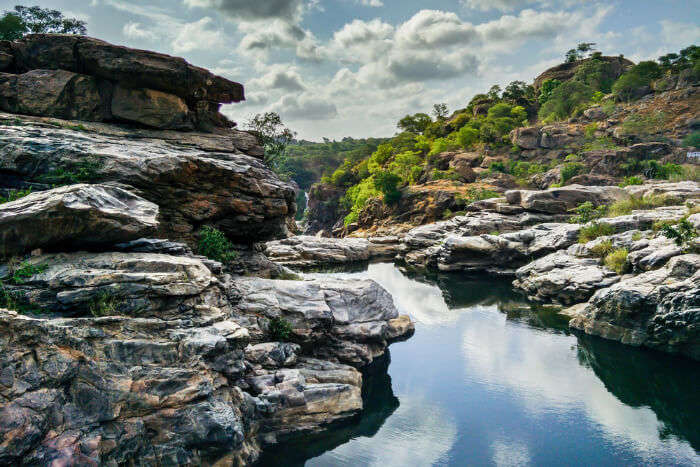 Are you planning a weekend dedicated to trekking near Bangalore? If so, our list of the best trekking places near Bangalore will come in handy when you begin your research. Let’s start the journey to the lesser known yet incredibly captivating trekking destinations near Bangalore that’ll give your weekend a new purpose.

It’s time to break free from the nerve-wracking hubbub of the city, pack your bag, and say goodbye to the chaos for a while.

Scroll down to find some of the best treks near Bangalore that should definitely indulge in for an unmatched adventure. Make a note of all the best ones you find.

1. Ramanagara – Trekking In The ‘Silk Town’

Ramanagara—the shooting venue for legendary Hindi movie ‘Sholay’, is one of the best trekking places near Bangalore. Famed for silk market and a scenic trek, Ramnagara is popular amongst both ammeture trekkers and professionals. It is also known for rock climbing, bird watching, and the ancient Pattabhi Rama temple, some of the many things that make it a perfect spot for weekend treks near Bangalore.

Must Read: 27 Fabulous Places To See In A Day Around Bangalore

Located at an altitude of 1478 m, Nandi hills or Nandidurg is one of the most popular places for trekking near Bangalore. One can climb up 1,200 steps to reach the summer palace of Tipu Sultan located on the top. It is a mesmeric location and offers breathtaking views of the surrounding hills and Amrita Sarovar. One can practice rock climbing and rappelling from Tipu’s Drop – a famous rock outcrop of Nandi Hills.

Highlights: Most photogenic sunrise from Tipu’s drop (a rocky outcrop)

In Skandagiri, the trek starts from Papagani Temple that can be easily accessed from Bangalore, Nandi Hills, or Chikballapur town. One can find two caves in the entire stretch. This is a fairly tough trek and mostly taken by experts. Also known as Kalavara Durga, this is one of the most beautiful trekking places in Bangalore, especially for night trekking around Bangalore. Explorers planning road trips from Bangalore will love this little piece of beauty.

Suggested Read: Bungee Jumping In Bangalore: Taste The Adventure In Its Raw And Best Form

Volcanic rocks, boulders, caves, and small hillocks have made Anthargange one of the most frequently visited trekking places around Bangalore. This trail is a combination of trekking and cave exploration. This is a 3-km long journey that takes you through tough, tricky trails and some of the most gorgeous vistas. Considered to be one of the best places for solo trekking near Bangalore, the trek is of any easy level and absolutely scenic, which makes it one of the best treks near Bangalore.

Highlights: Overnight camping in the caves

5. Savandurga Hill – One Of The Largest Monoliths In Asia

One of the most picturesque trekking places around Bangalore, Savandurga is perfect for nature enthusiasts and adventure lovers. There are two popular trails in Savandurga: Karigudda and Billigudda. This is a more popular and challenging trek through the age-old fort of Kempe Gowda.

Highlights: One of the best places to trek near Bangalore during night

With two temples, Bhoga Narsimha at the base and Yoga Narsimha at the top, the trekking of Devarayanadurga offer mesmeric view of the surrounding. The region is dotted with numerous natural springs and Namada Chilume is one of them. One will also find a huge cave with idols of Rama, Laxmana and Sita, en-route, which makes it one of the most charming trekking places near Bangalore for pilgrims and adventure seekers alike.

Suggested Read: 10 Hill Stations Near Bangalore For The Summer Of 2020

This is a moderately difficult trek through granite hillocks, wild shrubs, and other vegetation. Makalidurga boasts of its serenity and the sight of the ruined fort at the top delights every trekker. A one day trek near Bangalore, Makalidurga is trekked by adventure enthusiasts, especially from September to February. Since it’s only located 75 km away from Bangalore, it is one of the closest trekking places near Bangalore.

Highlights: Photography of the surrounding forests, curvy roads, and temple of Lord Krishna at the foothill

8. Madhugiri – One Of The Least Explored Trekking Spots

Madhugiri is the second-largest monolithic rock after Savanagiri and amongst the most beautiful offbeat places near Bangalore. On the way, one can see Madhugiri Fort built by Hyder Ali, which was infested with honey bee colonies soon after it was built. Though it’s among the best trekking places near Bangalore, the one and a half hours long trekking duration can be quite challenging at some stretches.

Highlights: Architectural ruins of Gopalakrishna Temple on the peak

9. Channarayana Durga – Swear By The Beauty Of The Surroundings

To enjoy the rustic beauty of the hills and the age-old fort, trek to Channarayana Durga. It is a moderate one day trek near Bangalore and takes about half a day to ascend and explore the Maratha fort, located atop. There are no proper sign boards, so trekkers sometimes get confused with the direction. With so much to offer, it’s one of the best trekking places near Bangalore.

Highlights: The area grows shrubs and herbs with medicinal value

Suggested Read: Holi Parties In Bangalore 2020 – The Perfect Hotspots To Celebrate The Festival Of Colors!

10. Kunti Betta – For Some Excitement And Thrill

With a cocktail of topography of rocky boulders, grasslands, and granite outcrops, Kunti Betta is one of the best trekking places near Bangalore known for night trekking. Overnight trekking near Bangalore in Kunti Betta is thrilling and worth the pain you take to trek it. People ascend at night and enjoy the most photogenic sunrise and stunning views of the surrounding paddy fields, forests and a sparkling lake.

Suggested Read: 10 Beaches Near Bangalore That You Have Got To Explore This Summer 2020!

Bilikal Rangaswamy Betta in the Eastern Ghats is one of the most popular trekking places in Bangalore situated near the famed Kanakapura town. It is also one of the highest hill towns in the area, thus making your trek all the more thrilling. It is also known as Bilikal Betta sometimes which means white rocks. It’s an excellent destination for short treks near Bangalore if you’re more into easy level trekking. Once you’re at the top, you can bask in the awesome views and visit the temple dedicated to Lord Rangaswamy. You can also visit at the time of the Rangaswamy temple festival at the top that locals celebrate there.

Further Read: 21 Road Trips From Bangalore You Must Plan With Your Friends

There are plenty of best trekking places near Bangalore for a romantic and beautiful holiday in Bangalore. Thrill seekers prefer to move to the hills for some adventure and that’s when our little guide comes to your rescue.

Q. Which are the best places for night trekking in Bangalore?

A. Some of the best places for night trekking in and around Bangalore are:

Q. Which are the most popular resorts near Bangalore?

A. Some of the best budget resorts near Bangalore for adventure seekers are:

Q. Is trekking allowed in Savandurga?

A. Yes, trekking is not only allowed in broad daylight, but this place is famous for trekking during the night time as well.

Q. Are there mountains in Bangalore?

A. Bangalore is a well-developed city that is settled on the plains. While there are no mountains within Bangalore, there are many mountains near Bangalore where one could go for trekking and adventure activities over the weekends.

Q. How can I go to the Skandagiri hills from Bangalore?

A. The best way to reach Skandagiri is from Chikballapur. One can get to Chikballapur from Bangalore via any state-run bus.

Q. Is Bangalore a hill station?

A. No Bangalore is not a hill station. It is a metropolitan city that is located in the plains.

Q. What is Bangalore famous for?

A. Bangalore is famous for being the Silicon Valley of India as it is the leading state in India when it comes to the field of IT. Apart from that, it is famous for its architecture, and the famous sweet of Mysore Pak.

A. Yes. Skandagiri is one of the best places for trekking near Bangalore where one can also experience night trekking.

Q. What is the best time to visit Skandagiri?

A. For those who love to enjoy the picturesque views from the top of the mountains, and for all trekking enthusiasts, the best time to visit Skandagiri would be from the months of November to January.

Q. Which is the best hill station near Bangalore?

A. Coorg and Chikmagalur are the two hill stations near Bangalore that are not to be missed by any of the travelers on their next trip.

Q. Which is the most popular place of trekking in Bangalore?

Q. Which are the best places for night trekking in Bangalore?

A. Some of the best places to night trekking in and around Bangalore are Skandagiri trek, Ramanagara trek, Anthargange trek, Kunti Betta trek and Savandurga trek.

Q. Which is the hardest trail near Bangalore?

A. Bilikal Rangaswamy Betta trail is one of the hardest trails near Bangalore. It is the highest hill in the area, this makes the trek more thrilling.

Q. What is the apt time of trekking in Bangalore?

A. As summer ends and monsoon begins, this is the perfect time for trekking in Bangalore. And the period of October to January end is also the apt time for trek near Bangalore, as the weather is stabilised at this period.

Q. What are the important equipment you need to carry while hiking?

A. One has to wear trekking shoes while hiking. As it is a hilly area near Bangalore, a warm light jacket should be worn. Water bottle and some refreshments should be packed in a bag when you are going for trekking near Bangalore.

Q. Which is the least explored trekking spot near Bangalore?

A. Madhugiri is the least explored spot for trekking. The duration of this trail is two hours with some stretches on the way. It covers like 100 kms to reach Madhugiri from Bangalore. One can enjoy the architectural ruins of famous Gopalkrishna temple which is situated on the peak.

10 Best Places To Visit In Kausani In 2020 That Make It A Winter Paradise!

Top Things To Do In Dharamshala: A Mix Bag Of 22 Popular And Offbeat Activities