Bullet Train In India: Here’s How It’s Going To Change Our Train Travel! 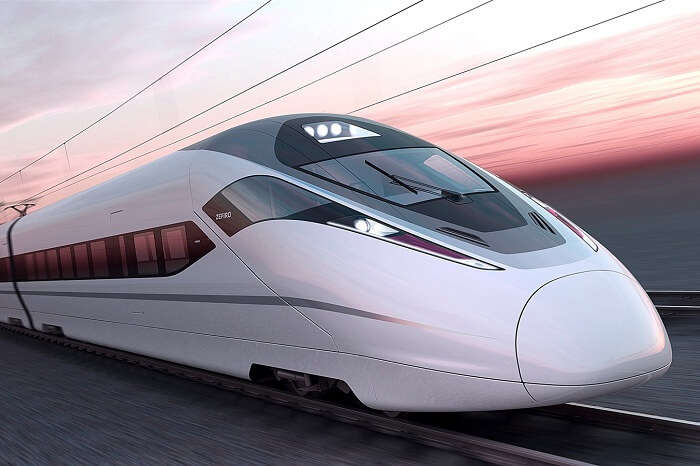 Traveling in a bullet train in India is a dream that may soon come true. And it is going to change the way we travel today. How, is what this blog tries to explore by answering questions about ‘when will the bullet train run in India’ and ‘the cities to be connected by bullet trains in India’.

When Prime Minister Narendra Modi said that he would bring bullet trains to India, sceptics scoffed. When he finalised the deal with Japan International Cooperation Agency (JICA), they were still indifferent. But with the testing of the Spanish Talgo trains in Uttar Pradesh, his vision of starting high speed trains in India seems to have gotten a new boost altogether.

But like any other government project of this magnitude, the Bullet Train India project is going to take time. The entire project is divided into various phases that will connect different cities of the country.

Here’s a detailed account of the various phases that are going to shape up the first bullet train project in India and the cities they will connect.

Ahmedabad To Mumbai Train: The First Bullet Train In India

Check out this detail about the first bullet train in India that will go from Ahmedabad to Mumbai.

1. India Will Soon Get Its First Underwater Railway Track

Out of the 508 km long corridor of the high speed bullet train in India, a 21 km stretch from Thane to Virar (Maharashtra) will go through an underwater sea tunnel. This will India’s first underwater railway track.

Must Read: A 2021 Handy Delhi To Shimla Trains Guide For First Time Visitors To North India

The proposed bullet train in India is expected to run at an operating speed of 320 km/h (350 km/h being its top speed) as opposed to the 160 km/h speed that the recently unveiled Gatiman semi-bullet train can achieve.

3. The Journey Will Be Covered In A Little Over 2 Hours

As opposed to the 7 hour journey between Mumbai and Ahmedabad by the Duronto Express, the Bullet Train is expected to complete the entire journey in mere 2 hours 30 minutes. The entire railway line will have 10 stations between the two financial centres.

4. It Will Be One Of The World’s Cheapest Bullet Train Projects

Out of the estimated INR 98,000 crore, Japan International Cooperation Agency (JICA) has agreed to fund about 80% of the project through a soft loan of INR 79,000 crore at 0.1% interest rate, with a tenure stretching over 50 years.Imagine INR 98,000 crore being considered cheap!

A study at IIM-Ahmedabad states that this bullet train in India will have to ferry a minimum of 88,000 persons daily to keep the project financially viable.

Suggested Read: A Brief Guide To Trains From Delhi To Sikkim For First Time Travelers To North East India

Hon’ble Railway Minister, Suresh Prabhu, said that the first bullet train in India will begin operations in 2023. The work is expected to begin by the end of 2018.

Here are details about another high speed train that will soon run from Delhi to Varanasi.

1. This Is The Second Bullet Train Project In India

Suggested Read: 8 Super Luxury Trains In India That Are Worth Spending A Fortune In 2021

2. It Is A Part Of A Longer Delhi-Kolkata Corridor

The proposed Delhi-Varanasi stretch is going to be a part of the bigger Delhi-Kolkata corridor. The Delhi-Kolkata stretch will be 1,513 km long.

3. And All This Will Be Covered At Astonishing Speeds

The travel time between Delhi and Lucknow will be under 2 hours. Even the fastest trains plying between the two cities take over 6 hours for the journey. And when compared to the 18 hours’ journey between Delhi and Kolkata by Rajdhani Express, the bullet train is set is cover this distance in mere 5 hours.

Suggested Read: 16 Most Beautiful Villages In India That You Must Visit In 2021!

4. But All Of This Comes At A Price. Big Numbers! Yet, Cheap Compared To Other Bullet Train Projects.

The estimated pre-liminary cost of the Delhi-Varanasi stretch is around INR 43,000 crore. The entire Delhi-Kolkata corridor will, however, cost about INR 84,000 crore.

Suggested Read: Seven Sisters Of India: An Introductory Guide For A North-East Tour In 2021

But till the bullet trains are built, the Indian Railways department has been testing with Spanish Talgo Superfast trains.

Spanish train Talgo began its test run on May 29, 2016 at the speed of 110-115 km/h on the Bareilly-Moradabad line in Uttar Pradesh as a part of the Indian Railways’ strategy to induct faster trains.

The lighter and faster train, with nine coaches and hauled by a 4,500 HP diesel engine, covered the 90 km distance in 70 minutes. In addition to being quick, Talgo’s lighter trains consume 30 per cent less energy.

2. This Was Followed By Mathura-Palwal Line

After the trial run on the Bareilly-Moradabad line, it was tried on Rajdhani route between Mathura and Palwal with speed up to 180 km per hour.

The Indian Railways department aims to cover the Delhi-Mumbai journey in 7 hours with Talgo trains.

Suggested Read: Luxury India Tours: 16 Royal Experiences In India To Make You Feel Like Maharajas In 2021!

3. Actions Are Being Implemented To Increase The Speed

Sceptics will continue to doubt the advent of bullet trains in India. If anything, the whole attempt has given the nation its currently fastest train – the Gatiman Express. This has given a major boost to the struggling Indian Railways. The Talgo trial, too, is going good.

Further Read: 18 Insanely Beautiful Train Journeys In India That Will Compel You To Log-in To IRCTC Right Away

Only time will tell how successful the bullet train plan will be. This will make traveling in India super easy as well as fast. So, let us hope for the best and wait for the arrival of the bullet train in India.

30 Unbelievably Beautiful Places To Visit In Kashmir One Cannot Miss In 2021!