12 Castles In Canada: Explore These Straight Out Of A Fairytale Like Structures 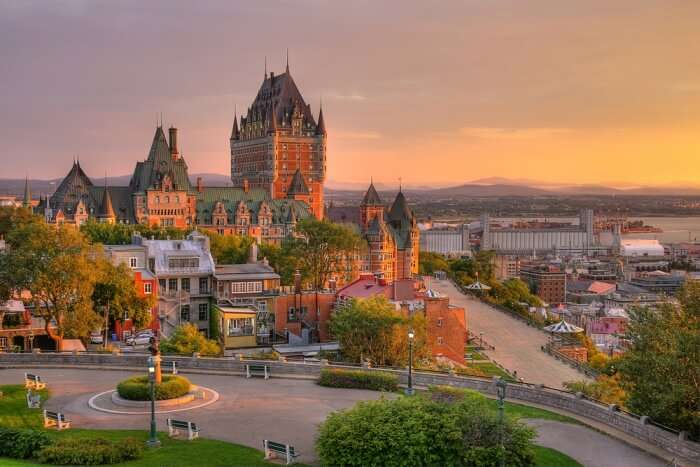 The second largest country in the world, Canada boasts of stunning locations that are must visit places for all the globetrotters. There are many beautiful landscapes and unique touristy sites that you are bound to get confused as to what all places you should visit! You can witness the Rocky Mountains and the beautiful cities of Vancouver, Calgary, and Victoria. There are some amazing national parks that house a plethora of fauna and flora. But this is not all that Canada has to offer. Another top attraction here are the castles in Canada. Read on to know more about them!

Not many of us are aware and have knowledge about the real castles that are located all around the world. Presenting you a list of famous castles that you will find in Canada.

The Dundurn Castle is a neoclassical castle that is constructed in Hamilton, Ontario. The architect of this beautiful castle is Robert Charles Wetherall and the construction of the castle was completed in the year 1835. It took almost three years for the castle to be completed. While most of us live in places that have a single digit rooms, this castle is known to have forty rooms!

The Dundurn Castle is a famous location for a lot of things. There is a museum and garden located here. The green spaces that are present here are also famous for being the backdrop of wedding portraits. There is even a kitchen of the castle that you can visit and sample the cuisine of the era.

The Craigdarroch Castle is located at Victoria, British Columbia. It is a Victorian era Scottish Baronial Mansion. It has a lot of historic significance and is a popular landmark in Victoria. The entire castle is spread around 25000 square feet and houses thirty nine rooms. The castle was constructed for a wealthy coal baron Robert Dunsmuir and his wife Joan. What is interesting is the fact that many of the construction materials were brought from various places. The granite was from British Columbia, oak staircase of the castle was prefabricated in Chicago, and the tiles were brought in from San Francisco. The effort taken to make this stunning castle is evident from this fact and it reflects in the beauty that this castle is today.

The Hatley Park Castle is located in Colwood, British Columbia. The property of the castle was purchased by lieutenant James Dunsmuir who was of Scottish descent and he made the marvelous castle which boasts of forty rooms. The entire construction has been done in Scottish Baronial style. The family owned the castle for a long period of time until the great depression. Currently the castle is designated as the National Historic Site of Canada.

The Banff Spring Hotel is a historic hotel that is located in Banff, Alberta in Canada. The hotel has a stunning view as it is located in front of the Mount Rundle which is a part of the Rocky Mountains, mountain range. It is designated as the National Historic Site of Canada. The hotel is currently managed by the Fairmont Hotels and Resorts. The castle was designed in a wooden structure which unfortunately burnt down in the year 1926. But currently you can witness the original wooden structure in the north and south wings which are the drawing elements from the Scottish Baronial style of architecture.

The Rideau Hall is commonly also known as Canada’s House. The Rideau Hall is the official residence of the Governor General of Canada. The castle is located in Ottawa. The place is known to have about one seventy five rooms and twenty seven outbuildings. Imagine living in a place like this! This castle again is a part of National Historic Site of Canada. Rideau Hall for the longest time has been a collection point for art and cabinetry. The rooms are furnished in such a way that there are elements that are taken from history of the residence as well as features objects that reflect contemporary Canadian culture.

The beautiful castle has been designed in the Gothic-revival architecture form. It is a kind of mansion that has a garden and is located in Toronto, Canada. The place in current time is a popular landmark and is also a historic house museum. The architect of the Castle Loma was E.J. Lennox who is also known to have constructed a lot of other landmarks in the city. The castle has also been used in a lot of television series and movies. The popularity of the castle goes to the immensely stunning architecture that has been used in its construction. The place is even used by many couples as a wedding location. Castle Loma is available for renting in the evening after it is closed for the public.

The Castle Kilbride formerly belonged to the Canadian Member of Parliament, James Livingston. The most prominent and amazing feature of the castle is the interior decorative murals that are made in the style of Italian Renaissance. Though 3D is quite common in the present time, but the murals used a different kind of technique that gives the murals an illusion of a third dimension.

The Chateau Lake Louise historically was used as a base for outdoor enthusiast’s alpinists. But this was more than a hundred years ago. Currently the castle is a hotel which is managed by the Fairmont hotel. This hotel is a perfect place to visit in the winters. There are a host of activities that are offered here. Ice skating, snowboarding, skiing, and sleigh rides. Apart from these there is even an ice sculpture completion that is conducted here. So for some snow fun you should definitely book yourself a room at this castle hotel.

The Empress Hotel is an Edwardian Chateau style of hotel. The hotel initially served the purpose of catering to the luxury railway tourists. The place has quite a glamorous history. The place has hosted a lot of kings, queens and an array of movie stars. The hotel currently has four eighty six rooms and suites that are spread throughout the hotel building. The interesting thing about the rooms is their colors. The colors used in the room are warm tone colors. Some of the specific colors have been sourced from China.

Suggested Read: 11 Cafes In Canada: The Best Spots To Hangout With Your Folks!

The Willistead Manor is a historic house that is located in the former town of Walkerville in Ontario, Canada. The architect of the Manor was a renowned architect of that time, Albert Kahn. The Manor was constructed in 16th century and the architect used the Tudor-Jacobean style of architecture for its construction. Currently the castle is a thirty six room mansion that is used as a banquet hall. During the time of Christmas, the house is decorated and is opened to the public.

The Ravenscrag is a former mansion that was built in between 1860 and 1863. The mansion was built for Sir Hugh Allan. Formerly the mansion has seventy two bedrooms and the entire mansion covered an area of 53475 square feet. The interiors of the mansion are a perfect example of the Victorian architecture. Bright colors were used and there were many murals that are said to be hand painted along with other decorative features.

Castles imply a different style of construction and architecture that makes it so enchanting and stunning. There are a lot of castles in Canada. Some of them are even presently serving as hotels where you can stay! We hope that this list helps you in expanding your knowledge about the castles that are located in Canada. So, book a trip with Traveltriangle and make sure that you add at least some of these castles in your bucket list!