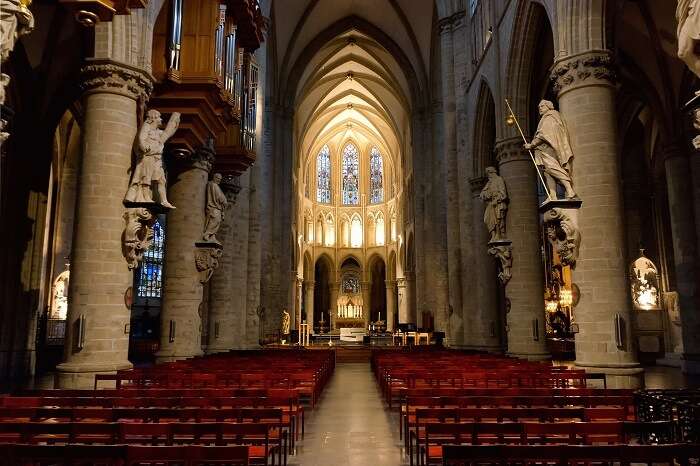 Brussels is one of the vintage cities in the world. The historic monuments, palaces, and museums enthrall everyone with their architectural marvel and grandeur, so do the cathedrals and churches. The city is endowed with many magnificent churches and each one of them reflects splendour and heritage of the city’s glorious past. Some are architecturally marvellous while others have a positive ambiance that ensures complete rejuvenation of mind and soul.Go through the list of most popular churches in Brussels, that should certainly be there in your holiday plan.

To understand the royal history and medieval glories; visit these beautiful churches in Brussels. Their beauty, structure, architecture and serenity will leave everyone in awe. 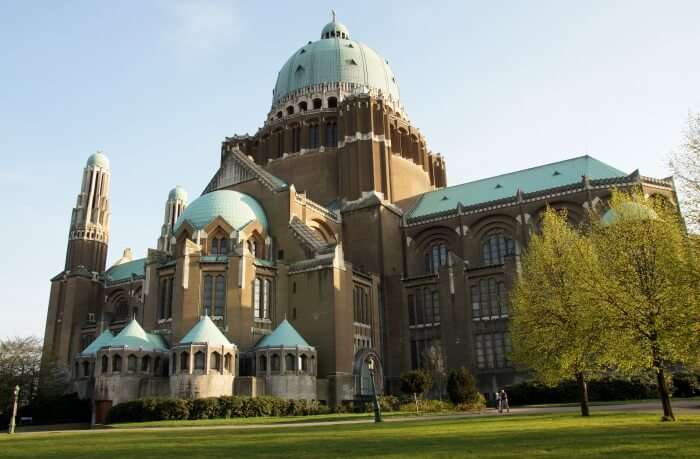 Dedicated to the Sacred Heart of Basilique du Sacré-Coeur in Paris, Basilica of the Sacred Heart is the largest church in Brussels and 5th largest church in the world. This 90 mtr tall church was constructed in spectacular Art Deco style and is considered as one of the architectural masterpieces of Brussels, Belgium. Though the foundation stone was laid way back in 1905, the construction completed in 1971, due to interruptions for WWI and WWII. The emerald green coloured dome stands as the beautiful contrast against the red terracotta stoned body of the church thereby making it one of the most beautiful churches in Brussels. Moreover, the observation deck of the Basilica of the Sacred Heart offers best panoramic view of the city.

Must Read: 10 Best Things To Do In Brussels To Embark On A Historical Journey 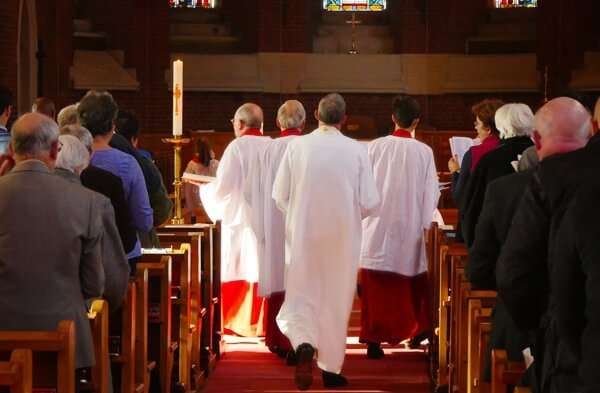 Holy Trinity Brussels Anglican Church is a part of the eminent Diocese in Europe of the Church of England and one of the most popular churches in Brussels. This was constricted in 1958 by the convergence of Christ Church and Church of the Resurrection. The architectural style of the church reflects marvellous Eclecticism and its intrinsic artwork, sculptures and frescos leave everyone in awe. Delivering Common Prayer, Holy Service, Common Worship and Communion on a daily basis, Holy Trinity Brussels Anglican Church has gained immense popularity amongst locals, making it one of the best English churches in Brussels. 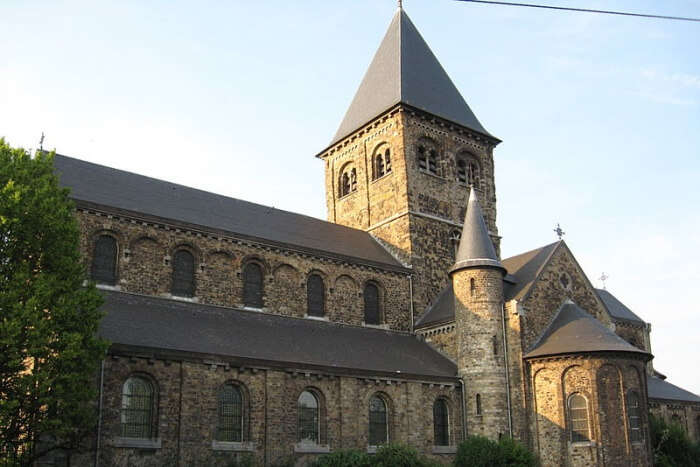 As one of the prettiest churches in Brussels, Eglise Saint Gilles attracts large volumes of tourists, round the year. Built in the 19th century, this church boasts of beautiful Baroque style architecture. Apart from the prayer and holy service room, Eglise Saint Gilles also houses a museum, showcasing paintings and sculptures. Located right across St. Gilles square, this church is easily accessible by public transport from any part of the city.

Suggested Read: 10 Best Romantic Places In Brussels For Adding More Spark To Your Holiday In 2022 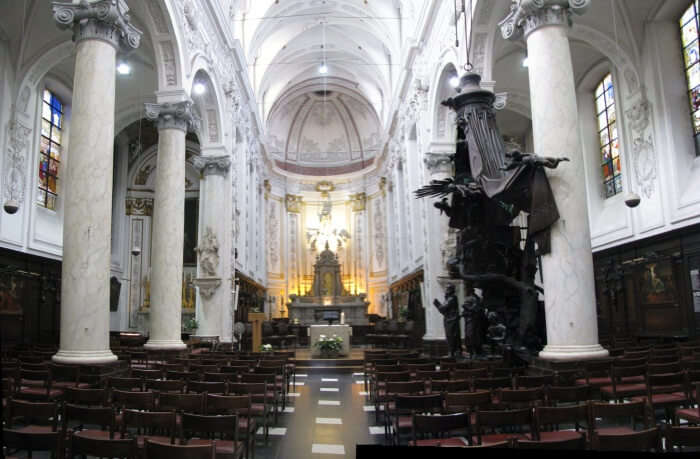 Built in the 18th century, this is one of the best Gothic churches in Brussels. Featuring white marble sculptures, large figurines and marvellous Baroque architecture, Church of Notre Dame Du Finistere is one of the few Brussels churches where people come for worshipping the Gothic virgin, Notre-Dame du Bon Succès.
The church is located in the buzzing area of Rue Neuve and surrounded by restaurants, pubs and shops, but the peace and serenity inside the church is overwhelming and tranquilising.

5. Church Of Our Blessed Lady Of The Sablon 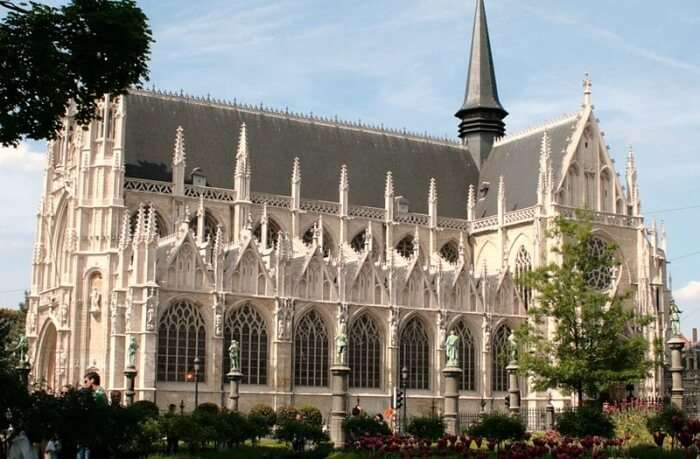 Suggested Read: These 10 Best Craft-Beer Bars In Brussels Will Leave You Wanting For More

6. Church Of Our Lady Of Laeken 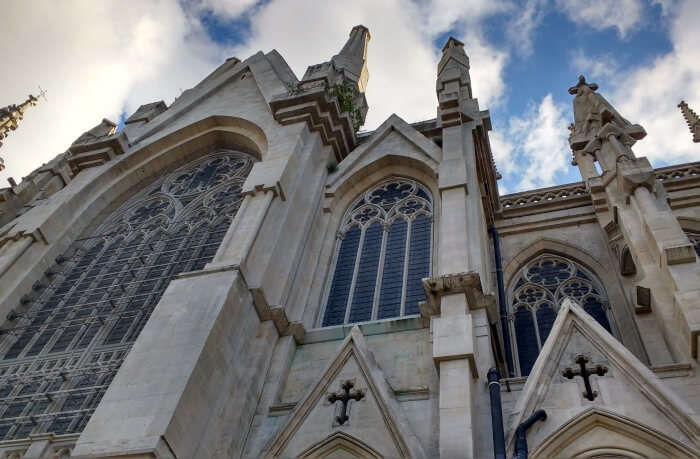 This is a neo Gothic Roman catholic church which was built in the fond memory of Queen Louise-Marie, who was the wife of King Leopold I. Eminent architect Joseph Poelaert, constructed the church, right next to the mausoleum of the queen, who passed away in 1850.
Located right next to the Castle of Laeken and being one of the catholic churches in Brussels, it stands as one of the popular tourist attractions in Brussels.

Suggested Read: 14 Best Restaurants In Brussels 2022 That Offer A Glimpse Into The City’s Vibrant Food Scene! 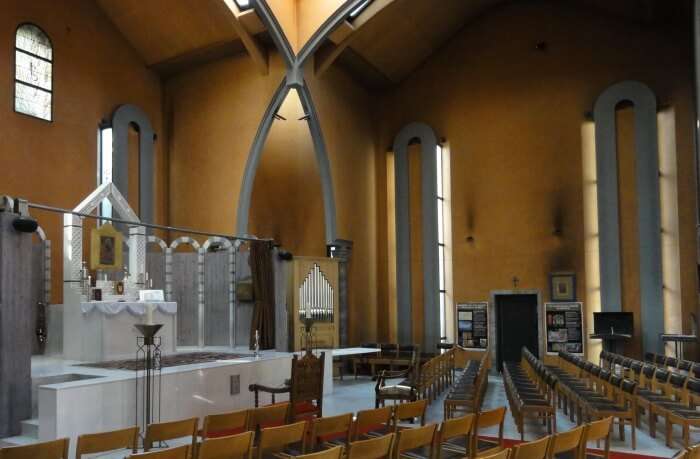 Eglise Sainte Marie-Madeleine is one of the oldest churches in Brussels, located very close to the Grand Palace. The squat silhouette and its baroque dome are the highlights of the place. The beautiful fresco painting on the walls and ceiling makes it a sight to wonder. The church was closed due to security reasons in 1989 and re-opened in 1991 as an exhibition venue. 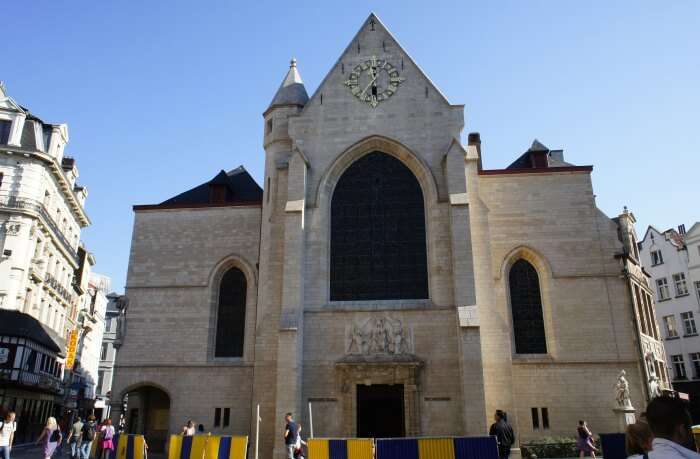 If we are talking about best churches in Brussels, Saint Nicholas Church needs a special mention. This small and pretty 1000 years old church, located behind Bourse in Brussels. Though most of the structure had been destroyed by French bombardment, but the beautiful painting of The Virgin and Child by Rubens and Vladimir Icon by an artist from Constantinople are eminent possessions here. 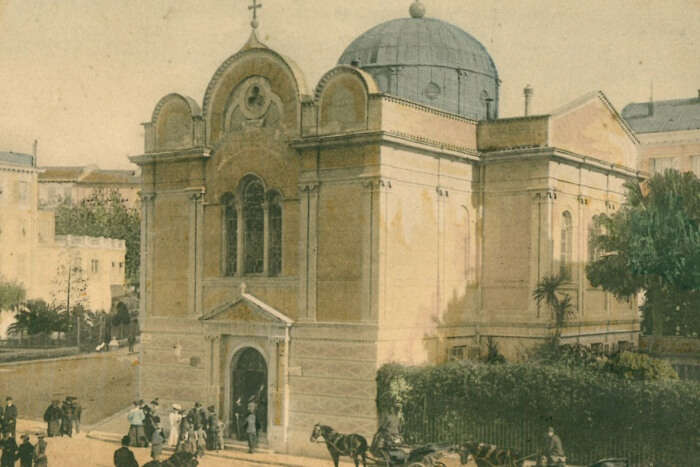 Paroisse Orthodoxe Roumaine Saint Nicolas is one amongst the few Roman Orthodox churches in Brussels, Belgium. Though the church looks ordinary and non-decorative, both in exterior structure and interior décor; but the serenity of the place is what attracts tourists here, to rejuvenate the mind and soul. 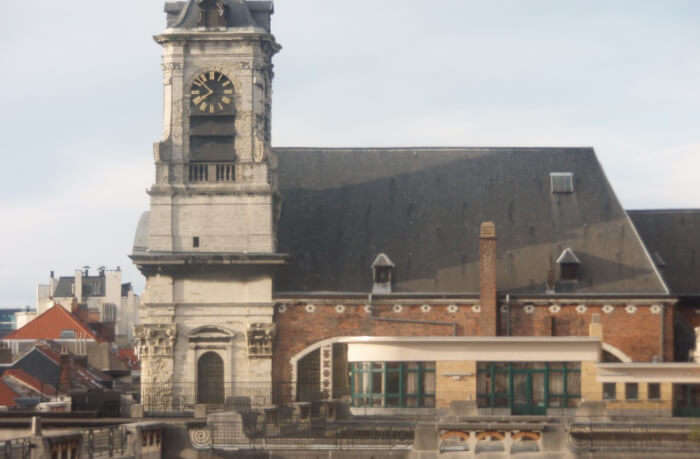 Built in the 18th century, the church of Eglise des Minimes reflects a nice fusion of Baroque and neo-classicism architectural pattern. The paintings by Flemish artists, vintage organ and white marble structure make the place looks pretty and spectacular. Popular as church of the Minimes, this place attracts tourists, photographers and historians and is considered as one of the most popular concert venues in Brussels. 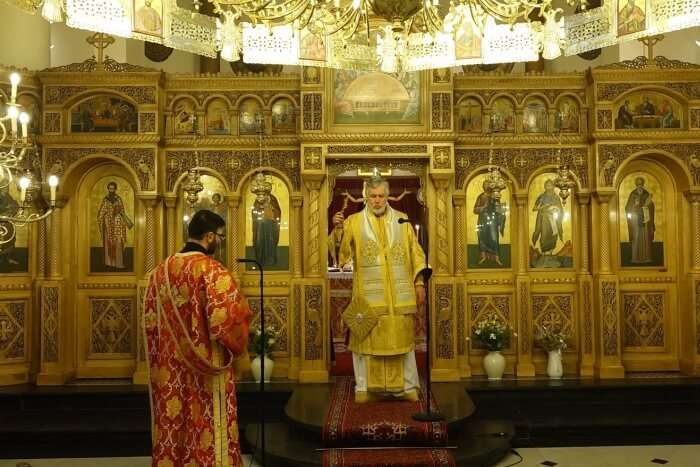 Last in our list is one of the Christian churches in Brussels. Cathedral Saints Archanges Michel ET Gabriel is located close to the Grand Palace and was constructed in 1874. Come here to admire the stunningly beautiful rose windows, Royal doors, Way of the Cross, Christ and the Forerunner, Holy Virgin Mary and Archangels.

Further Read: 10 Beaches In Belgium That You Must Visit On Your Trip

These beautiful churches in Brussels enhance the aura and charm of the vintage city as they are a reflection of its rich heritage and history. So, keep this list handy when preparing your itinerary for your trip to Brussels. Know of any more fascinating churches to add in this list of churches in Brussels? Share the names in the comments below.

How many churches are there in Brussels?

Which are some of the popular churches there in Brussels?

Some of the popular churches in Brussels are Holy Trinity Brussels Anglican Church, Eglise Saint Gilles, Basilica of the Sacred Heart and Saint Nicholas Church.

Which is the biggest church in Brussels?

Which is the oldest church in Brussels?

Saint Nicholas Church is the oldest church situated in Brussels. It is a small and pretty church which is about 1000 years old.

What is the timing to visit churches in Brussels?

Where is the Lady of the Sablon church located?

Lady of the Sablon church is one of the most popular churches of Brussels which is located in the upper area of Brussels. The exact location of this church is Rue des Sablons, 1000 Bruxelles, Belgium.

Is there any gothic church in Brussels?

Most of the countries consist of at least one church which is marked as a gothic church. The same is with Brussels. Cathedral of St. Michael and St. Gudula is an only popular gothic church situated in Brussels.