5 Best Ways To Convert INR To Euro On Your Europe Holiday In 2021! 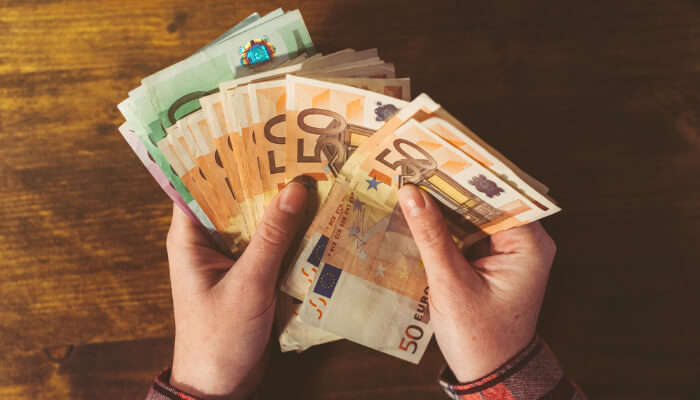 With so many nations packed into such a tiny space, you will never run out of destinations to explore in Europe. There are 28 different currencies in use across Europe. However, the Euro is the currency of 21 countries and 4 microstates. It is super simple to convert INR to Euro before your trip. Don’t worry if you happen to run out of cash while you’re away, you can pop into a store to pick up some more currency.

Must Read: In Pictures: 35 Most Beautiful Cities In Europe Will Make You Want To Trip There In 2021!

Suggested Read: 8 Luxurious Cruises In Europe For A Perfect European Experience In 2021!

Suggested Read: 9 European Villages That One Must Explore To Escape From Reality

Heading straight to the bank is the best way to convert INR into Euro. Here’s a list of 5 banks that offer the best currency exchange rate:

Out of all the banks in Europe, the European Central Bank has been issuing Euro banknotes for the longest time. All the notes are legal tender throughout the Euro area. The bank usually updates the exchange rates every working day, except on TARGET closing days. They are based on a regular daily concertation procedure between central banks across Europe.

Suggested Read: 7 Surreal Caves In Europe Which Are No Less Than A Magical Dream!

With competitive exchange rates, ICICI Bank makes sure you get your money’s worth. The service charges depend on the amount being encashed. To know the exact amount you shall receive, you can use their exchange rate calculator. When you choose confirmed exchange rates, the rate is confirmed or locked in at the time of transfer initiation. You need to specify the amount in Rupees that you want to exchange.

Citibank charges a substantial amount of money for delivery to your home or office. However, if you want to convert INR to Euro, it is free at any Citibank branch. The Citibank foreign transaction fee is 0% or 3% of purchases processed internationally, depending on the card. It’s best to set a Citi travel notification for your credit card or debit card any time you’re taking a trip.

Suggested Read: Europe In August 2021: A Handy Guide To A Relaxing Vacay

The catch is that foreign currency is only available for Wells Fargo checking and saving account holders. Many branches throughout Europe keep frequently ordered foreign currencies on-hand for immediate availability. To find a location near you that keeps currency on hand, you can use their branch locator.

JP Morgan has access to the best exchange rates and usually charge fewer fees than exchange bureaus. If you like to plan ahead and want to convert INR to Euro in Europe, this bank is your best bet. If you want to exchange currency without fees, you should be an account holder in the bank.

Suggested Read: Europe In September 2021: Things To Do, Events To Attend And More

ATMs And Debit Cards In Europe

To avoid getting fleeced, the best way to convert INR to Euro is at ATMs or by using your debit card. Here are a few things to keep in mind:

Further Read: 7 Food Festivals In Europe To Add To Your 2021 Bucket List

All hotels and airports will exchange your money for the local currency, but the INR to Euro conversion charges at these places are very high. You might pay more than 25% in fees. Make sure to convert INR to Euro at some of the cost-effective places that we have mentioned above on your trip to Europe. If you come across any other place where the exchange rate is low, let us know about it in the comment section below.

Q. Can I use my ATM in Europe?

A. Yes, one can use an ATM in Europe. In fact, it is an easy and cheap way to get cash in Europe.

Q. Can I use credit cards in Europe?

A. Yes, you can use credit cards in Europe but it’s better to use the debit card since credit card cash advance is expensive. To use ATMs in Europe, your PIN should exactly be of four digits. Make sure to set your PIN correctly before heading for the trip.

Q. Which is the most beautiful city in Europe?

A. Some of the most beautiful cities in Europe you must-visit are Venice, Rome, Milan, Zurich, Naples, Paris, Amalfi, London, Bergen.

Q. Will my Visa card work in Europe?

A. Visa and MasterCard are used the most in Europe. American credit cards work throughout Europe at places like hotels, restaurants, travel agencies, car-rental agencies. American Express is less common in Europe.

Q. How much money do you need per day in Europe?

A. Transportation in most of the Europe cities is only 1–2 euros. The full-day activity tours cost approximately 35 to 100 euros.

Q. Which are the most expensive countries to travel in Europe?

A. Switzerland, Monaco, Denmark, Malta, Iceland, France are some of the most expensive countries to travel in Europe.

Q. How much does a meal cost in Europe?

A. Meal cost in Europe depends upon the place you are eating. If you are having cheap fast food it will cost you 9 to 15 euros while restaurants meals cost somewhere around 15 to 25 euros.

Q. Where is the best shopping place in Europe?

Q. Where to convert the Euro to Indian Rupee?

A. There are many places around Europe to convert Euro to Indian Rupee. The forex section of any bank inside Europe has this facility. The ATMs and other private forex centers also let the user convert Euro to INR.

Q. Which is the best time to convert Euros to Indian currency?

A. Keep an eye on the current conversion rate. Depending on the devaluation of the Indian Rupee against the Euro, the currency can be converted.

Q. Is the value of Euro and USD the same?

A. The value of the Euro is a bit higher than the value of USD. This is done in comparison with the prices of Indian Rupee with Euro and Dollar.

Q. How to not get cheated while converting Euro to Indian Rupee?

A. It is always recommended to prefer well-known sources while converting Euro to Indian Rupee. This should be kept in mind that there is a wide circulation of fake currencies in the market.

Q. Where to convert the Indian Rupee to Euro?

A. There are various websites that provide the facility to convert Indian Rupee to Euro. The European banks inside India also offer forex services.

Q. Which are the countries that accept Euro?

A. About 26 countries inside the European Union accept Euro. It becomes easy for a tourist to travel around Europe by converting the currency only once.

Q. Is the value of the Euro set to face a downfall with Brexit?

A. There will be a reflection on the value of the Euro if Great Britain exits from the European Union. This would make the facility easier for the Indians to convert INR to Euro.

Q. How to check the current conversion rates of Euro and Indian Rupee?