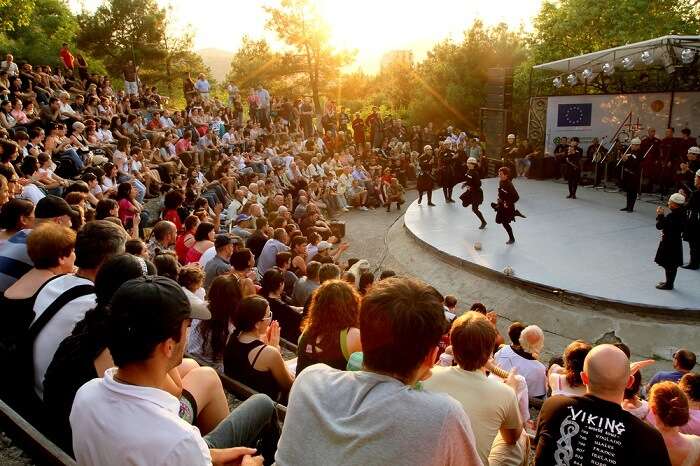 Over the last few years Georgia has emerged as one of the hot new destinations in the world, with travelers from across the globe adding it to their Europe itineraries to unravel its unexplored mysteries. Set amidst the soaring Caucasians, the country boasts of an exciting range of natural, historical and cultural sites to entice those bitten by the travel bug. Alpine meadows, charming villages, magical cities and pristine nature with endless possibilities for high-adrenaline adventure are the most alluring riches of Georgia.

The country’s cultural landscape is just as enticing as its natural wonders, making it a complete package of unforgettable experiences. Georgians love their traditions and celebrate colorful festivals throughout the year with great fervor. Festivals in Georgia are all about great food, good wine and soulful melodies, making them a feast for the eyes and senses.

Here are some of the most colourful festivals of Georgia that allow you to be a part of the country’s rich heritage. Take a look!

One of the most festivals in Georgia country marks the founding day of the capital city along with the autumn harvest season, and is celebrated with great fanfare and joyful festivities. Tbilisoba celebrates the rich diversity and culture of the country through traditional dance performances, theatre & music shows, fantastic fruit and cheese displays, fireworks and so much more. While most festivities are centred in the beautiful Old Town of Tbilisi as well as several city parks, Rike Park along the left bank of Mtkvari River showcases the rich wines of Georgia to be sampled and savoured by visitors. Art & craft stalls lining the city streets, grape-crushing and food festivals serving the country’s culinary specialities make the festival even more special.

When: Usually on the first weekend of October each year.

Must Read: An Ultimate Handy Guide To Explore The Paradisiacal Views Of Saunders Island!

One of the most popular music festivals in Georgia, Art-Gene festival pays tribute to the musical traditions and heritage of the country every year since 2003. Held at the Museum of Ethnography in Tbilisi, the week-long festival features folk music and dance performances along with contemporary music shows and craft displays. The open-air festival gives tourists a chance to witness the rich culture of Georgia while enjoying the cool summer breeze with a glass of wine or beer. There are handicraft stalls & workshops as well as food counters to relish the delicious Georgian cuisine at the festival venue. There are several performances & exhibitions in nearby towns like Adjara and Guria whic can be checked at the festival

Amongst the newest addition to the list of interesting festivals in Georgia country, this is a fitting tribute to the country’s love for wine. Georgia is considered to be the oldest wine producing country in Europe and has a rich selection of world-class wines produced locally. End of spring season marks the time for unsealing the traditional wine-making vessels called qvevri and thus the perfect occasion for sampling more than 60 varieties of Georgian wines. The gorgeous weather, wonderful wines and sumptuous Georgian barbecues are reason enough to plan your visit during this time. New Wine Festival celebrates the good life amidst rolling greens near Tbilsi every year, accompanied by some great music and dance performances. Surely it’s time to say Gaumarjos (cheers in Georgian) with the locals!

When: End of May every year

Suggested Read: 10 Largest Castles In The World That You Must Visit At Least Once In A Lifetime!

High up in the north Caucasus Mountains lies the breathtakingly beautiful region of Khevsureti bordering Chechnya. This picturesque region is the venue for one of the most authentic festivals in Georgia rooted in the local traditions. Dedicated to the UNESCO world heritage site of the beautiful Shatili village, Shatiloba showcases traditional hand-crafted goods, local cuisine and Khevsur beer all held in Khevsur stone houses and towers. The festival also features traditional music, folk performances, Georgian wrestling and thrilling mountain horse races amongst locals. Do not forget to sample the mouth-watering Khinkali prepared by locals as you dig into the delicious Shatiloba feast with your generous hosts.

Suggested Read: A Georgia Travel Guide To Fill Your Vacation With Lots Of Fun & Entertainment!

This is one of the most important autumn festivals in Georgia that celebrates the grape harvest with lots of fun, music, good food and of course great wine! With a wine-making history of 8000 years, grape harvesting is a special time in Georgian wine country when locals celebrate with friends and family after a bountiful harvest. Just like old times, some families let their children and grandchildren indulge in grape-stomping fun during this time. Though this is a family-oriented festival, the charming locals warmly welcome visitors to participate in the celebrations. You can have loads of fun helping them out with cutting grape bunches, transferring them to wine-making clay-pots and finally sharing the delicious festive meal of barbecue, khachapuri, local cheese and freshly baked bread.

When: Sept-October depending on the harvesting time in different regions.

In this country of many fascinating traditions, cheese-making is not just an activity but a cultural tradition that has withstood the test of time. Every year cheese-making farmers from across the country gather to showcase their tools and methods for preparation of delicious cheese. Gourmets and foodies from across the world are welcomed to taste an amazing variety of cheese: the hard & flavourful dambal-khacho (its preparation technique has been recognized by UNESCO), the spicy guda cheese and the uniquely braided tenili kveli from southern Georgia. It is one of those Georgian festivals which absolutely must not be missed by foodies and ardent cheese lovers. Initially held at Tbilisi, the festival is now held in the region declared winner of the competition each year.

Counted amongst the best jazz festivals in Georgia, this is one of the sought-after events for music lovers visiting the country around the same time. Along with the Tbilisi Jazz festival, this festival is responsible for drawing jazz lovers from across the world to Georgia to witness some world-class performance by top artists like Diana Krall, Wyclef Jean,and Robert Plant. Founded in 2007, the Black Sea Jazz Festival is held every in Batumi and nearby location on the Black Sea coast. With the perfect setting and top-notch arrangements, the festival has created a name for itself amongst music festivals across the Caucasus. With the growth in its fan following the scope of the festival has broadened and now includes R&B, hip hop, soul and funk too.

The stunningly picturesque UNESCO world heritage listed Tusheti region has its own distinct culture and traditions which are celebrated every year during the Tushetoba festival. Held at the Tusheti National Park, the festival aims to promote tourism in the region and showcase its beautiful landscape, unique architecture, charming villages and culture to visitors from across the world. The festival is traditionally kicked off by a horse racing event which is hotly contested, with the winner bagging a sheep and a flag. Counted amongst the top 10 festivals in Georgia country, Tushetoba gives you a chance to witness traditional cheese-making, Tushetian handicrafts and the delicious Khinkali (hugely popular meat dumplings). Traditional instruments and folk music playing in this perfect setting create a magical atmosphere.

This unusual festival celebrates not only the cultural heritage of UNESCO listed city of Mtskheta but also the historic Svetitskhoveli Cathedral which is one of the most sacred places in Georgia. Hundreds of people from different cities and countries gather in Mtskheta, the former capital of Iberia, to witness the festivities across the streets of the city. Live music performances, traditional dance ensembles, handicraft displays and events keep the visitors entertained. It is also a great place to savour local cuisine and pick up some wonderful souvenirs.

Suggested Read: 10 Best Places Near Nusa Dua That Are Perfect For Adding To Your Indonesian Trip Itinerary

The vibrant and colourful seaside town of Batumi comes alive with some spectacular events & celebrations during the Batumoba festival every year. Along with the traditional Gandagana event that showcases the charm of Adjarian villages along with special dance performances, the festival is enriched by folklore groups and musical bands that perform in Europe Square. The city is decked up for the occasion and interesting events like pantomime, finger theatre show and ballroom dancing keep the visitors engaged and entertained.

The interesting line up of festivals in Georgia give visitors a glimpse into the country’s culture & heritage through various shows, events and engaging activities. Though Georgians love their wine, beer aficionados looking for beer festivals in Georgia wouldn’t be disappointed as the Tbilisi Beer Festival in July celebrates good beer, food and music. So, now you know how to spend a cheerful holiday in Georgia, don’t think too much and plan a Georgia holiday right away!