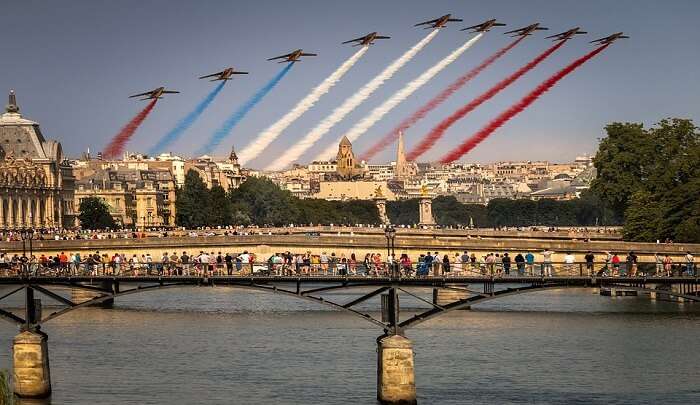 For travellers, France has been the world’s most popular destination for over three decades. Tourists are lured into France’s delectable cuisine, chateaux strewn lanes, fine wines and cosmopolitan culture. Although people just have Paris in mind when thinking of France, there’s actually a lot more to see and experience than this one city. France in July can be particularly rewarding. If you plan your holiday wisely, you can visit the regular tourist attractions as well as attend a bunch of cultural festivals and events. In this guide, we will list down the things you need to keep in mind for a great trip to France in July.

Weather In France In July

The weather in France in July is generally good although it can get very hot as we saw in the heatwave of 2019. Temperature usually settles between 20 to 25 degrees Celsius. However, it is advisable for you to book a hotel room with air conditioning. The northern part of the country can get a lot of rain, while the southern region is relatively warm and dry.

To deal with this you need to be prepared with some extra bits of clothing. In case you forget to pack extra clothes, which might not be that bad an idea since July can offer some of the best shopping with local vendors spilling the streets. Important things to pack during your visit include:

Must Read: 21 Best Places To Visit In France In Winter 2021-22 For A Blissful Holiday Experience!

Why Should You Visit France In July

Visiting France in July gives you the chance to celebrate everything from awe-inspiring music to great food. You get to discover art and craft, street theater and top classical music. During July, you can also follow one of the most popular events on the planet, the Tour de France.

All museums are open and crowded and all major attractions extend visiting hours to late evening due to summertime. France in July is a shopping haven as traders and shop owners set up tempting stalls in the streets. Due to summer rush travel and airfare can be expensive due to high footfall during this time. July is also marked by a number of festivals in France, namely:

Bastille Day: Bastille Day in the capital, Paris includes a dance party and a military parade. It is usually celebrated with an astounding display of fireworks for locals and visitors alike.

Loire International Garden Festival: This annual festival runs from the month of April through October. Chaumont castle and its gardens make for a great visit. Here you meet people interested in gardening and you learn a lot about garden design.

Festival d’Avignon: Every year in July since 1947, the Palais des Papes courtyard plays host to Festival d’Avignon. This is an annual arts festival and art enthusiasts are sure to have a great time during their visit.

Suggested Read: Celebrate Christmas In France For A Majestic, Magical, And Merry Holiday In 2021!

5 Places To Visit In France In July

There are countless places in France which you can visit. Listed below are a few places worth visiting in July:

Marseille is the second largest city of France and a major seaport. Boasting of a paradisaical climate, Marseille is home to medieval architecture, ruins from Rome along with several industries and university campuses. The old port forms the core of the city dominated by a couple of historic forts. This chirpy and bustling part of the city is populated by shops, bars and waterfront cafes.

The capital of France is arguably the most popular tourist destination in the world. Known as the City of Love, Paris is famous for its restaurants, fashion, art and its romantic atmosphere. Iconic attractions like the Louvre Museum, Arc de Triomphe and the Eiffel Tower attract over 50 million visitors each year. It goes without saying that Paris needs to be at the top of your list of places to visit.

The Loire Valley is a great destination to visit in France in July. Located in the heart of central France, it is known for its beautiful scenery, magnificent chateaux and gorgeous vineyards. The valley stretches along the Loire River, hence the name, and is home to charming old villages and chateaux. A trip here will give you good opportunities for many wine tours around local wineries which offer wine tastings to tourists.

Suggested Read: This Edible Chocolate Cottage In France is What ‘Sweet Dreams’ Are Made Of!

Strasbourg is the capital of Alsace and is situated along the French and German border. This city is the seat for European Parliament and the European Court of Human Rights. The centre of the city, Grande ile is what attracts tourists the most. Here visitors can find a blend of Franco-German architecture in the form of museums, cafes and shops along with Gothic Cathedrals.

The port city of Bordeaux is known for its historic architecture, great shopping, pretty villages and of course, the vineyards. The city centre attracts many visitors who come to witness its Gothic era churches, old bridges and over 300 historical structures. The Place de la Bourse, one of the many plazas, provides you with great photo opportunities due to a stunning mirror-like effect.

5 Activities To Try In France In July

Here are a few things you can do to enjoy the beautiful July sun and soak in the culture of France:

The Moulin Rouge was opened in Paris in 1889, the same year in which the Eiffel Tower was erected. The rich and decadent at the time visited this entertainment venue and called it “slumming”. The courtesans who worked here invented the can-can dance which was considered risque for that time period. It has served as France’s Premier venue for entertainment. Subject of many films, this experience is a must if you visit France in July.

The Chateau d’if is a fortress on an island in the Mediterranean, just off the coast of Marseille. It was built in 1524 as a way to defend Marseille from invaders. The chateau later became a fortified jail for political prisoners. However, this Chateau is most famous as a setting for Alexander Dumas prison break novel – The Count of Monte Cristo. Visit the place if you want to see it in all its stone cold grandeur.

Suggested Read: 10 Elegant Resorts In France For A Lavish Yet Comfortable Holiday

Encased in sharp walls made of dolomite or limestone, Les Calanques are a string of mini fjords situated in Cassis. It can take a day to explore these scenic fjords on foot. You can take a boat cruise through the waters if you don’t want to hike. Samna is a popular calanque during the summer months of July, August. If you’re a scuba diver then this place is a must-visit.

Dating back to the 16th century, Petite France is a picturesque old town in Strasbourg. With half-timbered residences, canals and cobblestone streets, it is a lovely place to just relax or take a walk with your loved one. It also has a lot of options for eating with outdoor cafes and restaurants giving you the chance to sample some traditional French Dishes.

Suggested Read: Indians Will No More Need An Airport Transit Visa Across France. Relieved Much?

5. Be A Part Of The Crowd In Rue Sainte Catherine

Situated in Bordeaux, Rue Sainte Catherine is one of the crowdest and longest streets in Europe for pedestrians. It was closed for traffic back in 1984 and no vehicles are allowed inside. The street is a premier shopping destination lined by major French retailers and chains. A must visit for those who are in need for some retail therapy.

Further Read: Shopping In France: 6 Best Cities That Serve As A Perfect Escape For Shopaholics!

France is a mish mash of historical sites, great cuisine, wine country and the scenic French Riviera. Visiting France in July can be a rewarding and unforgettable experience. If you want a heavy dose of art, culture and romance, then this is the place for you. Although planning a French holiday can be overwhelming, we have tried our best to make it as easy for you as possible.

How is the weather in France in July?

The weather in France in July is hot. Temperatures can rise up to 30°C and sometimes up to 35 °C. Days are long and sunny followed by cool evenings.

What should I pack for France in July?

You should pack sun visor, sunglasses, or hat, and sunscreen for sunny days. If you wish to visit the beaches, then you should bring your bathing suit. You must also pack a light jacket, long pants, and sandals for cooler nights.

Is Paris crowded in July?

Paris in July is one of the busiest times of year. In July, Paris witnesses two of the biggest annual events including Festival d’Avignon and Bastille Day.

Is France hotter than England?

As a whole, yes, France is hotter than England. France always wins the battle when comparing the highs of both the countries at any given day or time.

Is the Eiffel Tower area safe at night?

Yes, it is absolutely safe to roam around the Eiffel Tower at night, as it is a major tourist destination. However, it does not hurt to stay vigilant at all times in a foreign area.

Greece In July Bulgaria In July Istanbul In July