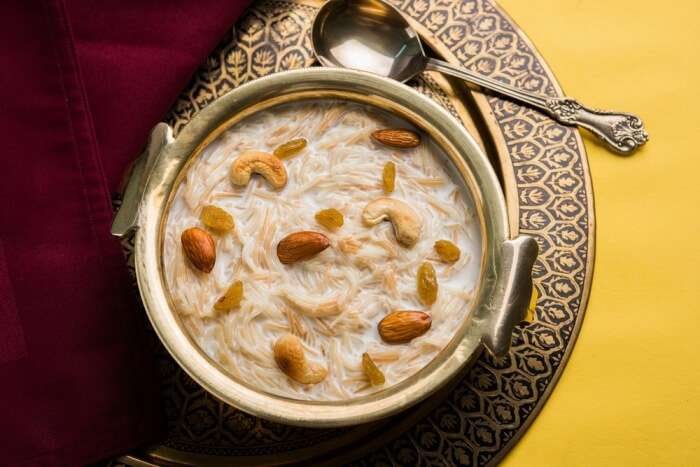 Known for its backwaters, surreal beaches, the coastline of the Western Ghats covered with lush green tea plantations, Kerala is a state in India that doesn’t fail to impress. With impeccable houseboats, enchanting wildlife, relaxing ayurvedic treatments, and a chance to take your taste buds on a ride, Kerala offers unforgettable experiences. The inhabitants of Kerala are as welcoming and pleasant as the mouth-watering Kerala sweets.

With various different festivals taking place in Kerala, the excuses to cook these scrumptious and decadent desserts are never less. Fulfilling the needs and cravings of every sweet tooth out there, the textures, flavors, and aroma of the sweets in Kerala will make one come back for more. When traveling around God’s own country, do not miss out on indulging in these heavenly desserts.

With flavors of coconut, jaggery, and banana dominating the tastes of dishes in Kerala, there is no dearth of desserts where ingredients and condiments haven’t been played with. Leaving the taste buds tingling and craving for more, travelers should definitely take a whiff and hog on the desserts made with love and a lot of coconuts!

One of the common Kerala sweets, Palada Payasam is a staple for the households in the state. Made with boiling the crunchy vermicelli and rice in milk to the soft stage and flavored with cardamom, sugar, and butter. To add to the taste and texture, this delicious dessert is garnished with raisins and cashew nuts. This sweet can be found as a part of the Onam special meal.

Must Read: 10 Homely Villas In Thekkady Set Amidst True Nature’s Bounty In Kerala

Sweet that melts in your mouth is nothing less than heaven. Banana Halwa is one such dessert. Glossy texture, dark brown shade and its tenderness make this dessert one of the most relished sweets in Kerala. Made with the staple ingredient- ripened bananas along with sugar, ghee, almonds, and cardamom powder, Banana Halwa is a must try when visiting the land of backwaters.

Neyyappam is one of the most loved sweets of Kerala. When on a culinary journey in Kerala, Neyyappam should definitely be on the list of Kerala sweets and snacks that one wants to try. Fried in ghee, this sweet and jaggery stuffed pancake not only fulfills the stomach but also fulfills the cravings of people. Neyyappam is typically made from rice flour, coconut, cardamom, milk, ghee, and then stuffed with a mixture of jaggery. This delicacy is served as a tea time snack.

Suggested Read: Top 10 Places To Visit In Kerala During Monsoon For A Mesmerising Trip In 2019

This is one of the best traditional and old sweets in Kerala. A variant of Neyyappa, Unniyappam is sweet that you can never have just one! Served during the celebrations of Onam Sadya, these little hemispheres hold a special childhood memory for the locals. Usually prepared at home, this dessert is made with basic ingredients of mashed bananas, jaggery, and coconut.

Elaneer Pudding is one of the most exotic dishes when it comes to Kerala sweets images. Something similar to a pannacotta, hero of this sweet is nothing but lots of coconuts! Set with gelatin or agar-agar, Elaneer Pudding is extremely refreshing and especially enjoyed under the hot sun. Prepared with condensed milk, coconut, sugar, milk, agar-agar, and essence this sweet has a perfect balance of sweetness making it one of the delicious Kerala sweets.

Laddoo in itself is the popular sweets of India made in different ways in different parts of the country. One of the favorite Kerala sweets amongst kids, Rava Laddoos are small hemispheres flavored with coconut, dry fruits, and cardamom. When traveling to God’s own country, do not forget to get a box packed of these finger-licking sweets for friends and family back home!

Also knows as rice coconut kheer is a specialty during Tamil New Year. This traditional payasam is prepared by soaking the finest jaggery in warm water, crushing it and heating it till it becomes thick. Rice is then blended and ground with coconut before adding to the milk for cooking. After adding the jaggery to the porridge-like rice, the whole surroundings fill with heavenly aroma and scents of this tempting delicacy.

Suggested Read: 8 Best Kerala Honeymoon Places To Visit With Your Significant Other

A dessert made of only three basic ingredients- egg, sugar, and water, Mutta Mala is another Ramadan popular dish in Kerala. Made by pouring the egg yolk through a small hole into boiling sugar water so that the yolks resemble strings, this sweet is not to be missed when traveling to Kerala during the holidays.

A combination of lasagna and pie in appearance, this tempting delicacy is layered with sheets of pastry dough and filled with savory or sweet fillings. Consumed widely during the festival of Ramadan at the time breaking the fast, Chatti Pathiri is a popular Malabari dish. Alternate layers of pastry sheets and sweet custard filling, topped with sesame seeds make Chatti Pathiri rank amongst the top ten Kerala sweets.

Suggested Read: Trekking In Kerala: A Short Guide For Beginners!

Ada Pradhaman tops the list of must-have Kerala special sweets. Tagged as king of sweets in Kerala, Ada Pradhaman is full of all the important flavors of Kerala- coconut, banana, rice, and jaggery! No meal is complete without a bowl of Ada Pradhaman making it one of the tasty desserts of Kerala. Made using coconut milk, this sweet has the authentic and traditional flavor of Kerala that reflects the culinary culture of this South Indian state!

Returning from a Kerala trip without tasting even a single kind of Payasam, is like returning from a Goa trip without visiting a single beach. Payasam is one of the most famous sweets in Kerala. And when you have it available in such a wide range, you can easily choose your favourite flavour or ingredient. Bamboo Rice Payasam is a popular kind, as this rice is widely used for preparing sweets dishes. They have a unique taste that uplifts the flavour of the dish. And the roasted cashew garnishing makes the icing on the cake.

Kerala is a land of coconut trees. Coconut is added in different forms to almost every dish, then how can something as popular as laddoo be spared? Coconut Laddoo is highly famous throughout the country and when it mixed with mawa, the taste becomes heavenly. Mawa also becomes a good substitute for sugar.

Malayalis love Payasam and you can tell that from the wide variety in which this sweet-dish is available. Though pumpkin is used in several sweets made throughout the country, this versatile veggie has always been an underdog. Pumpkin Payasam stands out for its spicy-tangy taste. And garnishing it with roasted almonds and cashew nuts just makes it even more irresistible. This is why is one of most delicious sweets of Kerala.

Orange has been one of the most popular flavours and even among the kids. The peppy and tangy taste of orange can make any dish interesting. And when it is added to the much-loved Payasam, the fan base just widens up. The amazing combination of thick orange pulp mixed with coconut oil, added to boiled rice paste, makes this rich and flavourful sweet-dish.

The origin of Akkaravadisal is associated with the Iyengar tradition, that is basically the Hindu Brahmin tradition of Tamil Nadu. But this dish is also popular in Kerala. The base ingredient is boiled rice and moong dal which is added to milk. Sugar or jaggery makes it sweet and spices like cardamom and saffron adds additional flavour. The signature roasted cashew garnishing makes it even more attractive.

Further Read: Monsoon In Kerala: Explore The Coastal Gem Like Never Before!

There is no dearth of Kerala sweets when traveling to the Southern part of India. There is no other better way to understand a culture thoroughly than through the flavors and tastes. With numerous amount of snacks and sweets in Kerala cuisine, one will never be able to get enough of the taste. Do take a culinary journey to Kerala and taste the heavenly desserts of the state that will surely make your taste buds tickle!

Q. What is a special sweet in Kerala?

Q. Which is the best place to buy special kerala sweet?

A. Kerala sweets are easily available at the local sweet shops and bakeries in state. But there are also specific regions that are popular for the best version of a sweet, for instance Calicut, also known as Kozhikode is well for its authentic halwa (aluva).

46 Fabulous Places To See In A Day Around Bangalore In 2020!

16 Best Places To Visit In Warangal In 2020 That Prove It’s A Hidden Gem Down South!

18 Best Valentine’s Weekend Getaways In India For A Sweet Escape With Your Love!