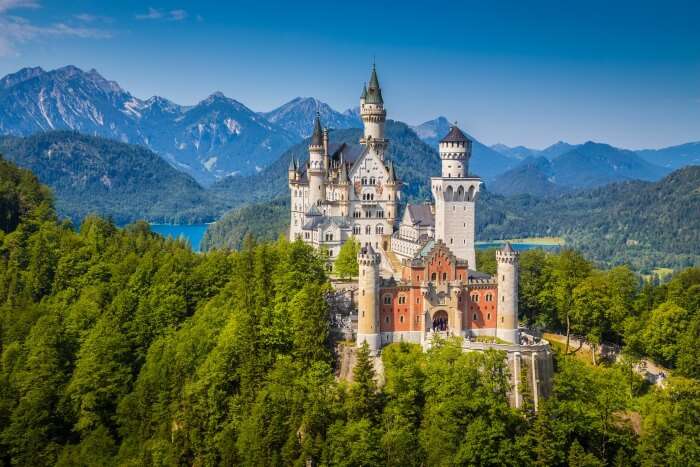 The Bavarian city, Munich is home to an endless number of museums, cathedrals, churches, cafes, restaurants etc., which makes it the perfect setting for those who love to travel! The city is highly influenced by Bavarian culture and history. The rich and impressive Bavarian culture can be witnessed in every nook and corner of the city. But if your interest is drawn a little more towards knowing the broad facets of the city, then a tour to some of the Bavarian castles will do full justice.

Here is our listing of some of the Munich castles that you must include in your checklist when you visit the Bavarian city.

Neuschwanstein Castle in Munich is the most visited castle in the world due to its charismatic outlook. The castle was built in the 19th century by King Ludwig II and was opened to the public soon after he died. The Romanesque Revival inspires the design of this fairytale castle. The mosaic flooring, mural artwork on walls, portraits and chandeliers etc. add an air of exuberance to the interiors. The most spectacular spaces to be admired by anyone are kings bedroom and the colorful hall. The castle is located on the rugged hill near to the village of Hohenschwangau. The design of the castle is so mesmerizing that Walt Disney used it as an inspiration for its castles and that's the reason why it is also known as the Disney Castle in Munich. This Neuschwanstein Castle tour from Munich is totally worth!

Must Read: 10 Day Trips From Munich That Are Worth Taking Once In 2022!

Linderhof Castle is second in the list of most visited Munich castles. This country house castle is situated in the south-west of Munich at a distance of around 100 km near the town of Oberammergau. The castle is the smallest of all the castles built by King Ludwig II and the only one where he stayed at the time of construction. The palace is considered as one of the most beautifully designed properties of that time. It is surrounded by a mountainous landscape holding uniquely designed buildings. The castle has a sprawling front lawn that is divided into five sections. The most remarkable part of the palace is the hall of mirrors which was used as a kind of living room by the king where he used to spend his time reading.

Prunn Castle is situated in the north of Munich at a distance of 120 km. The castle was built in the 13th century in a Gothic style architecture. It is located on a vertical outcrop above Altmühl river valley offering a breathtaking panoramic view. There are cliffs surrounding all the sides of the palace. The manor was first acquired by Wernher of Prunn, which was later taken in possession by Adalbert of Prunn and finally held by Herr von Laaber of Praiteneck. The highlight of the castle is the white horse painted on the sides of the palace which is said to be the figure of the Teutonic Knights of Frauenberg. This royal castle tour in Munich is undoubtedly a worth!

Timings: 9 am to 6 pm ( castle can only be visited with a guided tour)
Cost: INR 500 approx for a regular trip and INR 900 for a combined ticket to the Prunn Castle and Liberation Hall.

Herrenchiemsee Castle is situated at a distance of 60 km from Munich in southern Bavaria. The royal complex of the palace is located on an island surrounded by lake Chiemsee. The new castle was built by King Ludwig II to replicate the fascinating palace of Versailles and boasts of classy pieces of art, a rich porcelain collection, and famous paintings. It also has a lush lawn just like the one in Versailles. While the premises of the old palace was converted into a residence, the palace is now maintained by the Bavarian administration to keep the heritage intact.

Nuremberg Castle is situated in Nuremberg city which was widely known for its criminal trials. This large castle dates back to the 12th century and offers a glimpse into the significance and power of the Holy Roman Empire. It became an essential imperial castle as all of the German emperors stayed here. The highlight of the palace is the Romanesque chapel and the well which was the primary source of water to the castle. It has three main sections - the Imperial Castle, the Burgraves' Castle, and the buildings by the Imperial City.

Hohenschwangau Castle is situated in the southern part of Germany. King Maximilian II, who was King Ludwig’s father, built in the castle in the 19th century. It was the childhood residence of King Ludwig II. It is located very close to the Austrian border and is visited by a fair number of visitors each year in comparison to Neuschwanstein Castle which is the most visited castle in the world. The palace is perched on a rocky site that offers an incredible night view, and probably that's the core reason why one should pay a visit to this place on their trip to Munich.

Burghausen Castle, in east Munich, is the most extended castle complex, as declared by the Guinness World Record company. It was built in the 19th century. Burghausen Castle is styled based on gothic architecture. Above all, it offers a splendid view of the Salzach River. The building has a central castle with one courtyard on the inside and five courtyards on the outside. This gothic castle remained the second residence of the lower Bavarian dukes from 1255 to 1503. The place is perfect for capturing mesmerizing moments due to the panoramic view it offers.

The castle can be visited with self-guided tours at your own pace and interest.

Trausnitz Castle is situated at a distance of 74 km from Munich city in Landshut, Germany. It was built in 1204 by Duke Ludwig I. This hilltop castle was the home of Wittelsbach dynasty that served as the residence for lower Bavaria from 1255 to 1503. Many modifications were done in this medieval structure since its construction, but the size remained nearly the same since the time of Louis I of Bavaria. The striking areas in the castle are the tower terrace, White Hall and Knights’ Hall which are used as banquets till date.

Guided tours are advised to visit the castle.

Munich Residenz was open to the public in 1920, and today it is listed as one of the most remarkable palace museums of Europe. It is located within Munich city where the visitors can witness the changes in forms of princely self-representation. The palace has elegantly designed rooms, paintings, gems, furniture, and religious items.

The residence offers self-guided tours with free audio guides for the museum and treasury to enjoy the place at your freedom. It is the most accessible and convenient option for anyone tourist staying in the city as it is one of the castles near Munich airport.

These are some of the royal Munich castles that should be knocked off from your travel list when you visit was Munich. One cannot really experience the real history and culture of Bavaria without paying a visit to these castles. Contact TravelTriangle for your bookings now and enjoy a hassle-free holiday in Germany!