Mussoorie In December In 2020: Explore The Queen Of Hill Stations This Winter 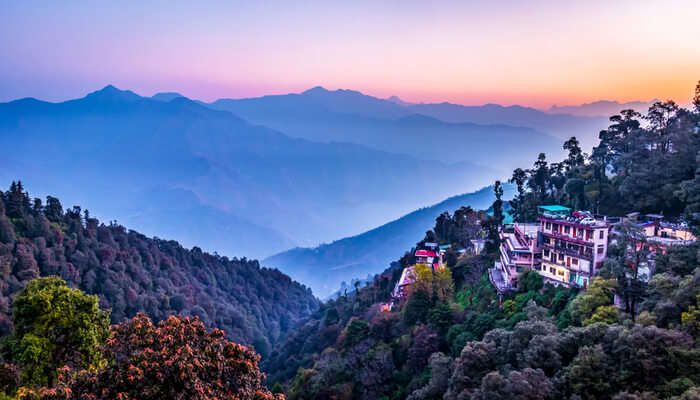 Mussoorie, the Queen of Hill Stations is quite a place to visit for a short trip, and the tranquil environs often make people want to retire here, settle down, and not go back to the crowded cities. One finds the tourist crowds flocking the place during the summer months when the plains are scorching with heat while the weather is pleasant here, in the hills. But if you like winters, then the real fun is in visiting Mussoorie in December. It is quite cold, but the winter sun, when it shines above the clouds, is like a cozy embrace of warmth. Also, if you are lucky you might get to watch the snow fall, and the city covered in white, is one of the best sights one can ask for! So, dive in and know what Mussoorie in December has to offer to you.

Weather In Mussoorie In December

Must Read: 15 Most Beautiful Places To Visit In Uttarakhand In Winter 2020

5 Best Places To Visit In Mussoorie In December

There are quite a few interesting places to explore in Mussoorie on a trip there in December. Have a look at some of the places one should not miss!

There is nothing fancy about Char Dukaan, and if you ask a local they’d still wonder over the hubbub made about this place, and tell you that these are four shops where one can get tea, coffee and more. But ask a traveler or a lover of the hills, and they’ll tell you that Char Dukaan isn’t just a place but so much more. Head here on a wintry December morning and enjoy a steaming cup of tea or coffee with bun-omelette or a sizzling plate of maggie. If desert is what you like with your morning coffee, then they have some of the best waffles that one can ask for!

Location: Landour
Things to do: Have a steaming cup of coffee with bun omelette

Suggested Read: 27 Amazing Places To Visit In Mussoorie For The Perfect Summer Getaway In 2020!

Every hill station has a Mall Road, and no visit to a hill station is complete until one takes a stroll here and Mussorrie is no different. The Mall Road in Mussoorie is quite a happening place with a number of shops selling beautiful woollen items and family restaurants for one to enjoy a delicious meal. One can also find a lot of small roadside food shacks dotted across the Mall Road. The best thing to enjoy at Mall Road is a sizzling plate of boiled eggs garnished with green chillies and an ice cream, a softy to be precise! Yes, having an ice cream in winter is utter bliss!

Suggested Read: 8 Best Places Near Uttarakhand That You Should Add To Your Itinerary Right Now!

Location: Landour
Things to do: Marvel at the architecture, seek blessings

Suggested Read: Uttarakhand In June: Your Personal Guide For A Blissful Vacay In Summer 2020

Another exciting point in Mussoorie is Lal Tibba. It is also the highest point here and Mussoorie weather in December offers one with panoramic views of the snow capped Himalayan peaks, the town and the surroundings. Hike up to this scenic point and enjoy the views, lush green environs, and fresh air. The vantage point is at a distance of 4.5 km from the city centre and one can either hire a cab, or choose to trek to Lal Tibba. The scenic views are totally one’s time and efforts! Add it to your list of places to visit in Mussoorie in December.

Suggested Read: Trekking In Uttarakhand: The 7 Greatest Treks That Will Leave You Mesmerized

Nestled in the foothills of Himalayas, Dhanaulti is further up from Mussoorie at a distance of around 24 km. if you want to enjoy snow in Mussoorie in December, then Dhanaulti is where you might get lucky. Dhanaulti often receives snowfall in the months of December and January and the entire land gets covered in sheets of ice, making it look like a pretty winter wonderland. Do not forget to wear layers of thermals, as it is extremely cold yet fun! As Mussoorie weather in December remains awesome, you can surely plan a brief excursion to Dhanaulti as well!

Location: Dhanaulti
Things to do in Dhanaulti: Experience a snowfall, enjoy a scenic drive

Tips For Traveling To Mussoorie In December

Suggested Read: 10 Rustic Homestays In Uttarakhand For A Lovely Abode In The Hills

How To Reach Mussoorie

If you are planning to explore places to visit in Mussoorie in December then check out the best ways to reach here:

By Air: Mussoorie does not have an airport of its own and the nearest airport is Jolly Grant Airport in Dehradun at a distance of 54 km. One can hire a cab to reach Mussoorie from the airport.

By Rail: There is no railhead at Mussoorie, and the nearest railway station is in Dehradun. One can take a cab or bus from there to reach Mussoorie.

By Road: The best way to travel to Mussoorie is via road, and one can self drive, or hire a cab. It is at a distance of around 35 km from Dehradun and takes around 1 – 1.5 hours to reach. There are no direct buses to Mussoorie, but one can take a bus to Dehradun from any other city and then catch another bus or taxi for Mussoorie.

Further Read: Rivers In Uttarakhand: Know Everything About These Water Bodies Which Are A Lifesource Of The State!

Mussoorie is all about exploring the town on foot, stopping at small cafes and enjoying a steaming cup of tea or coffee while lazily gazing at the snow-covered Himalayan peaks. Head to Mussoorie in December 2020 and enjoy the chilly temperatures of this hillside beauty. Wait for the sun to peek from behind the clouds in the morning and gaze down towards the Doon valley glittering after sunset! Book a trip to Mussoorie with TravelTriangle for a great holiday with your friends and folks!

Q. Is Mussoorie a high-altitude hill station in Uttarakhand State?

A. No, Mussoorie comes under mid-altitude ranges of the Garhwal Himalayan Mountain Range in Uttarakhand District, North India. The altitude of Mussoorie ranges from 6,000-ft to 7,464-ft AMSL.

Q. When to visit Mussoorie to see snowfall?

A. December to February are the winter months and Mussoorie in December starts receiving snowfall. A weeklong tour is the best to see the snow-clad mountains peaks, snow-fed pine forest, and enjoy the white-painted surroundings in Mussoorie.

Q. Is it safe to travel to Mussoorie during winter?

A. If you can withstand the cold temperature with warm clothing, you can travel to Mussoorie in winter. Yet, there will be difficulties to travel via road due to heavy snowfall. Sometimes road may get blocked for snow clearance for three to four hours.

Q. How long will it take to cover the top Mussoorie attractions?

A. You will find several 4-days and 3-nights tour package for Mussoorie as this is the best amount of days to spend in this hill station.

Q. Can I see mountain ranges of the Himalayas from Mussoorie?

A. Yes, you can find many lofty mountain ranges from Mussoorie. It is advisable to visit Lal Tibba to view the snow-capped high-altitude mountain peaks through a telescope. This is the highest point in Mussoorie with an altitude of 7,464-ft AMSL.

Q. Is there rainfall in Mussoorie?

A. Yes, Mussoorie receives a pre-monsoonal shower in May. It causes precipitation during the day hours. The normal monsoon rainfall occurs in-between June to August. These months are rainy season in Mussoorie. You might also witness snowfall in the month of December.

Q. Is Mussoorie a tourist-friendly place in Uttrakhand, India?

A. Yes, Mussoorie is an all-season tourist-friendly place in Uttrakhand State, India. Its government receives major revenue from the tourism industry. The locals are also welcoming and are ready to help out tourists.

Q. Is December a good time to visit Mussoorie?

A. Yes. The time between September and June is the best time of the year to enjoy the pleasant weather, fun activities and amazing landscape of Mussoorie.

Q. What can I buy in Mussoorie?

A. If you are planning to go shopping in Mussoorie, here are a few items that should definitely be on your shopping list:
1. Woolen garments
2. Wood and Brassware
3. Jewelry
4. Handicrafts
5. Pashmina shawls

Q. Is it safe to visit Mussoorie in December?

A. Yes. It’s safe to visit Mussoorie in December, but due to heavy snow, certain roads may be blocked.

Q. Is one day enough for Mussoorie?

Q. Is Mussoorie worth visiting?

A. Mussoorie, also called The Queen of Hills, is a stunning hill station located in Uttarakhand, is known for its mesmerizing beauty, pleasant weather and has small-town charms which make it totally worth visiting.

Q. Is there snowfall in Mussoorie in December?

A. Yes. You can expect occasional snowfall starting from the mid of December which will last through the month of February.

Q. What to wear in Mussoorie in December?

A. Waterproof and windproof Jackets, woolen socks, muffler or woolen cap, body warmer or thermals and snow boots are must-haves if you are visiting Mussoorie in December.

Q. What is there to do in Mussoorie in December?

A. You can never run out of amazing places to explore or things to do in Mussoorie. Here are some of the most exciting adventure activities that you can try in December.
1. Sky Walking
2. Valley Crossing
3. Zip Swing Adventure
4. Rock Climbing
5. Paragliding
6. Nature Walk
7. Roller Skating
8. Boating
9. Trekking

Top 15 Hill Stations Near Haridwar For Mountain Excursion Holidays In 2020!