6 Best Picnic Spots Near Chittorgarh That Offers You Unbeatable Leisure! 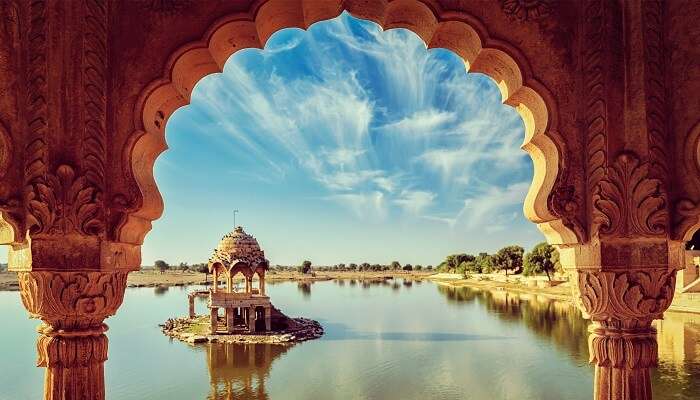 Chittorgarh is a city in the north-western state of Rajasthan and has a mesmerizing historical essence. Boasting of rich cultural heritage, Chittorgarh has a regal lining to it and has umpteen minarets, forts, temples, and palaces to offer to everyone. There are many places you can explore in and around this magnificent city that will enrich you and fill your hearts with pride as you find yourselves in awe of the lineage of our country.

While there may be many reasons as to why you can visit Chittorgarh and the places around it, one of the best ones is to go for a picnic!With numerous picnic spots near Chittorgarh at your disposal, it will be difficult to choose just one for leisure and recreation; which is why we have a fun guide for you so that you can choose the best!

Here are the six best picnic spots near Chittorgarh ideal for a one-day picnic or a lifetime of them!

The Bhainsrorgarh Wildlife Sanctuary is located in the Aravalli Hills in the city of Chittorgarh, Rajasthan and is regarded as one of the most important wildlife sanctuaries in India. It is located near the rivers Bemany and Chambal which flow inside of the Chittorgarh fort and due to its natural environment, the Sanctuary serves as a perfect tourist attraction and also because there are much diverse flora and fauna inhabiting the sanctuary such as chinkaras, deer, Jackal, lizards, hyenas, wild boar, turtles, crocodiles, and antelopes. There are also various local and species such as flamingo, sarus crane, goose, and more.

Must Read: 14 Places To Visit Near Alwar That’ll Help You Make Your Rajasthan Trip More Productive

Menal is a small village located in Bundi road in Rajasthan. The village of Menal is a major tourist attraction because of its possession of ancient temples, traditional archaeological ruins, and preservation of the cultural heritage of Rajasthan. The town offers a beautiful landscape and has beautiful temples, waterfalls, lakes, and forests, providing to the visitors an eye-catching scenic view.

Another great picnic spot near Chittorgarh is Sita Mata Wildlife Sanctuary. It is situated in the Pratapgarh and Chittorgarh district of Rajasthan. Now, the fauna of this lush green wildlife sanctuary comprises spotted and chausingha deer, wild deer, Indian leopard, jackals and more. Also, one can see almost 130 varieties of migratory as well as residential birds here. The Sita Mata Wildlife Sanctuary also has a historical significance as there is an ancient Valmiki Ashram here which is considered as the birthplace of the sons of the Hindu God, Lord Ram.

Suggested Read: Popular Cafes In Bikaner To Hangout With Your People On A Rajasthan Trip In 2021

The Mandalgarh Fort is an ancient fort near the district of Chittorgarh and is one of the greatest tourist attractions in Rajasthan. Believed to be one of the oldest forts of Rajasthan, it has experienced many historical battles of medieval times. Furthermore, there is also a Shiva temple inside the fort along with a large pond that attracts a lot of people and gives the fort a recognition among the best picnic spots near Chittorgarh. Thus, one can always visit the fort when planning for a picnic near Chittorgarh.

The Sanwariyaji Temple, also known as Lord Krishna Temple, is an important pilgrimage place near Chittorgarh. The temple is located on the Chittorgarh-Udaipur road and has been built very beautifully which is why it experiences almost hundreds of visitors daily and the pilgrims visiting the temple acquire good and positive energy. It is widely believed amongst the people of Rajasthan that those who visit this Barbara of Shri Sanwaliya Seth, all their desires are fulfilled and thus, one can always visit the Sanwariyaji Temple for a picnic with their family members and friends.

Suggested Read: Get The Rajasthani Bohemia On! 14 Amazing Shopping Places In Jaipur To Explore In 2021!

Nagari is one of the oldest towns in the state of Rajasthan located near Chittorgarh. Hindu and Buddhist remains have been found in the town that dates back to the Mauryan and the Gupta period. Nagari is also supposed to have been one of the most important townships of the Mauryan period in Rajasthan and the excavations at the village have given a glimpse of the Hindu and the Buddhist times. On a picnic to Nagari, one can find a stupa made of terracotta and molded bricks along with abundance of natural beauty!

Aesthetic temples, the ancient monuments and forts, the beautiful dense forests and sanctuaries and the natural beauty of the picnic spots near Chittorgarh capture the essence of Rajasthan and beyond! Picnics are always occasions of joy and happiness and these places will only further your excitement; which is why you must waste no time in planning your trip to Rajasthan and exploring these spots!

Which are the famous resorts near Chittorgarh?

Which is the nearest airport to Chittorgarh?

The nearest airport to Chittorgarh is the Udaipur airport/ Maharana Pratap Airport which is easily accessible from all the picnic spots around Chittorgarh.

What are the best places one can visit around Chittorgarh?

Some of the best places around Chittorgarh are:
– Bassi Wildlife Sanctuary
– Deogarh
– Bijaipur
– Menal
– Bijolia

The Sanwaliya Seth Praktya Temple opens every day between 5 am to 12 pm and then again between 2.30 pm to 11 pm.

Is there an entry fee for Sita Mata Wildlife Sanctuary?

Yes, the entry fee for Sita Mata Wildlife Sanctuary is INR 20 for Indian adults, INR 10 for an Indian child, and INR 80 for foreigners.

An Aerospace Engineer by profession and a freelance content writer by passion, Ankur has always had a zeal to write. He has been born and brought up in Allahabad, and strongly believes that the pen is mightier than the sword.