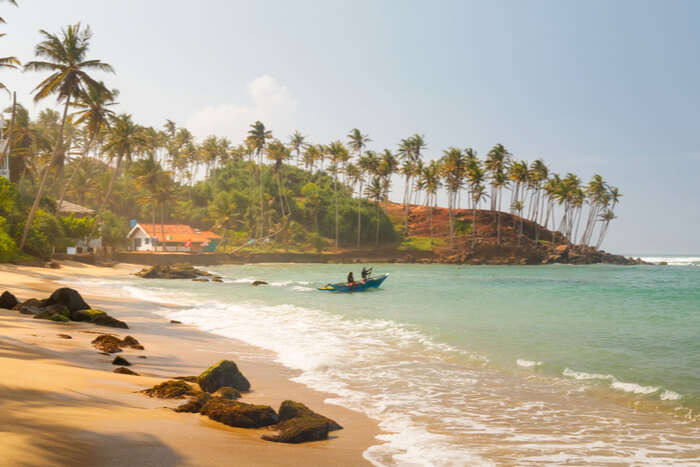 Matara is a busy town booming with commercial activities. Situated 160 kilometers from the Sri Lankan capital of Colombo, the coastal town may not feature highly on the lists of tourists. The high rise buildings housing some of the leading multinational companies may not seem like an attractive tourist landmark in Matara. However, that does not mean that Matara holds next to negligible tourist value. The Nilwala River cuts through the city of Matara forming stunning views along its path. The river falls into the Indian Ocean at Totamuna. Additionally, the beachfront paints beautiful scenes along the coast of the city.

Matara city has many sites that stand as a testimony to the past of Sri Lanka. You must visit Matara atleast ones in your lifetime to know Sri Lanka better. And, if you wish to make the most of your visit, include the following places to visit in Matara on your list:

As the name suggests, the Star Fort is constructed in the shape of a star. It was built by the Dutch to prevent attacks from external enemies. The fort is composed out of 6-points forming a star which has a point facing every direction. Each point is bolstered with two large canons. Still protected from all sides by a deep moat, the Star Fort houses a well in the center that offered water within the territories. Additionally, two prisons are also present within the forts premises. It was later occupied by the British to carry out administrative work. The Fort stands even to this day as a remnant of colonialism in Sri Lanka.

Architectural buffs will be mesmerized with the T-shaped Old Dutch Trade Center. Located on the western section of the town, it was once the towns market bustling with trade activities. Composed of steep, imposing roofs and conical towers, the Old Dutch Trade Center still stands to this day in its grandiose. The open-sided structure is supported by wooden beams and columns, while a majestic entrance greets the visitors. The roof is latticed with clay tiles, locally known as Peti Ulu. It also bears British architectural influences with its decorated, whitewashed columns.

Must Read: 15 Best Places To Visit In Colombo That Will Spice Up Your Sri Lankan Sojourn!

The Weherahena Temple is located on the eastern part of the town of Matara. The temple contains an artificial cave, which stands decorated with scenes from the life of Buddha. The pathways of the Weherahena Temple lead to a colorful, gigantic Buddha statue towering over 25 meters height. As picturesque as the spot may be, photography is strictly prohibited within the temple. A procession of dancers and trained elephants celebrate the anniversary of the founding of the temple during late-November or early December.

Suggested Read: 19 Photos That Will Make You Wish You Were In Sri Lanka Right Now!

The beaches in Matara are not very touristy. However, the Polhena Beach stands as an exception to the rule. The Polhena Beach may be hard to access, but it is worth all the navigation. Situated at a distance of 2 kilometers from the Matara City Center, the Polhena Beach has calm waters calling out visitors for a swim. The offshore coral reefs break the waves offering a serene sandy cove along the coast. Due to the romantic atmosphere of Polhena Beach, it enjoys the position of a popular honeymoon destination. It also acts as a weekend getaway for the locals.

The Crow Island is located right across the Polhena Beach, where the Nilwala Ganga River meets the Indian Ocean. Covered in lush green and wilderness, walking tracks, mangrove plantations, and freshwater lakes, the island carries great aesthetic value. The island hosts a mix of ecosystems. Locals often scout to the Crow Island Beach Park to spend time with their kids and other family members. The Crow Island Beach Park contains an array of parks, rides, and play areas that are perfect for unwinding. The sea along the Crow Island is choppy and hence is not suitable for swimming or bathing.

Suggested Read: 10 Reasons Why Sri Lanka Should be Your Next Holiday Destination

The Dondra Lighthouse is located at the Dondra Head on the southern tip of the Sri Lankan island. Touching a height of 160 feet, it is the tallest lighthouse in the entirety of Sri Lanka! The whitewashed monolith can be seen from every direction. Conceptualized by Sir James Nicholas Douglass, the structure is built in stone, which was imported from Cornwall and Scotland. The octagonal brick tower has a spiral staircase traveling to the top-most floor. The balcony offers the panoramic views including that of the Indian Ocean in the South and the Bulutota Mountain Range in the North.

Suggested Read: 7 Cottages In Colombo For A Refreshing Holiday Experience

Situated on a small island. Matara Paravai Duwa Temple is a Buddhist temple that is as scenic as it is peaceful. Surrounded by the ocean, Matara Paravi Duwa Temple is home to Buddhist monks and ideal for soul seeking. You may find monks crossing the bridge and going inside the temple. You are requested to maintain silence and decorum at all times during your visit. The sound of crashing waves feels like a meditative music to the ears. If you want to get away from all the hsutle-bustle and flee to tranquil surroundings, then you should come to this place.

Image Source
One of the best places to visit in Matara is the beach itself. Unlike other popular beaches in Sri Lanka, you will not find much crowd at this place. So, enjoy taking long walks by the shore, go beach combing, or just sit under a tree and read your favorite book gazing at the ocean once in a while. When the ride is not strong, you can also enjoy taking a bath in the sea.

Image Source
Matara is blessed with quite number of picturesque beaches, one of which is Medawatta Beach. What lures visitors to this place is the serenity and astounding views of the ocean. Once can relax here for hours strolling or sitting. The beach is outlined with hillocks. So, reaching this place might be a little exercise for you. This beach is mainly famous for surfing and has got a number of good hotels around too.

How To Reach Matara

Image Source
The quickest way to reach Matara is by covering the Southern Expressway, which connects Colombo to Matara in the shortest driving time. Matara can be found towards the end of the Southern Expressway. This route bypasses the Galle Road, the highway which offers a charming view of the coast. Thus, if you wish to cover a more eye-pleasing route, you could also travel via the Galle Road, which connects the southern towns of Galle, Matara, and Hikkaduwa to the Sri Lankan capital.

Further Read: 19 Reasons Why I Would Rather Be From Sri Lanka Than Anywhere Else

Matara is a gem of a place in Sri Lanka that has so much to offer to the tourists. In case you feel like dithing the opular cities in Sri Lanka and go offbeat, remember you have Matara as an option. With so many places to visit, a trip to Matara will positively be full of traveling to these destinations and diving into adventures. So pack your bags and book your tickets to Sri Lanka now!

Frequently Asked Questions About Places to Visit in Matara

Q. How far is Kataragama from Matara?

Q. What is the postal code of Matara?

Q. Which hotels in Matara are good for families?

A. There are quite a family-friendly hotels in Matara like Malee Villa, Seadin Coral Home, Sudu Bay Guest House, and Akeinya guest. You will find both luxury properties and budget hostels in Matara.

Q. How much does it cost to stay in a hotel in Matara?

A. A decent 3-star hotel will cost you around INR 2,500 or more depending upon its location (closeness to the beach) and amenities provided. There are places with tariff starting as low as INR 700 but you may not enjoy the experience there.

Q. What are the best hotels in Matara near Matara Fort?

A. Hotel Nawathana and Fort Sea View Hotel are a couple of hotels near Matara Fort where you can stay and enjoy the views of the beautiful Matara Fort.

Q. What is there to do in Tangalle?

A. Tangalle is just 35 km from Matara known for its beaches and coastline. There is a lot you can explore in Tangalle like the Tangalle Beach and Mulkirigala Raja Maha Viharaya. There is a small Dutch Fort that is used as a prison now.

Q. What is there to see between Galle and Colombo?

A. The distance between Galle and Colombo is 124 km. You could take a train journey between the two places and admire the picturesque scenery. You could visit Kalutara Bodhi Temple and Tsunami Museums. Take a boat ride in the mangrove forests and visit the moonstone mining factory.

23 Tourist Places In Odisha To Visit In 2020 For A Fun Vacation!