Sikkim In August 2021: Find Out What It Has To Offer During This Time Of The Year 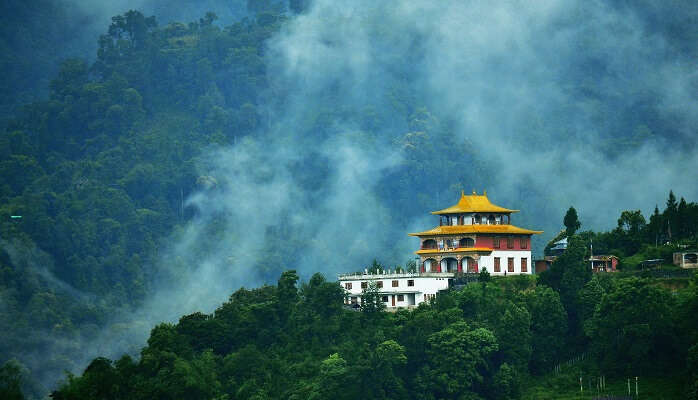 A paradise of the North-eastern region in India, Sikkim is tucked beautifully amidst the rugged mountains, lush green valleys and mesmerizing landscapes. The blissful aura of this place attracts millions of tourists every year. Not only the enchanting natural beauty but also the cultural and historical vibe of this place is very impactful. A number of monasteries and temples make Sikkim a peaceful place. If you are planning to visit Sikkim in August 2021 then stroll down to find out what all is there in Sikkim which travelers can explore during the month of August.

Weather In Sikkim In August

The best time to visit any place depends on the type of activities the traveler wants to indulge in. Sikkim is blessed with quite a pleasant weather and a trip to Sikkim can be planned at any time of the year depending on the interest of the traveler. April to June sees summer season in Sikkim when the temperature ranges between 5°C to 25°C. Unlike the northern part in India, summers in Sikkim are pleasant and remains cool during the evening time.

From July to September, monsoon prevails in Sikkim. During monsoons the whole Sikkim comes to life again and looks gorgeous with lush green valleys. Sikkim’s weather in August is ideal for sightseeing of waterfalls and enjoy its dramatic and fierce flows. Also, one gets to enjoy great discounts and offers during this time as this is not the peak tourist season in Sikkim. During the monsoon season temperature ranges between 4°C to 15°C. Winter season hits the boundaries of Sikkim during the months of October till March. The temperature ranges between -5°C to 7°C. Sikkim is covered with a white sheet of snowflakes and looks heavenly beautiful.

Best Places To Visit In Sikkim In August

If you are traveling to Sikkim in August and wondering what all attractions to visit here to enjoy the most of the weather then stroll through the list below.

Khecheopalri Lake is one of the best offbeat destinations to visit, if you are taking Sikkim tour in August. The enthralling beauty and natural vibe of this place will give you a sense of satisfaction like never before. Considered sacred, the lake comes to life again during the month of July and August when the rains hit the lake and makes it flow gorgeously. The landscape surrounding the lake is heavenly beautiful with bush-covered mountains.

Must Read: 15 Top Things To Do In Sikkim For Unbeatable Adventures In Breathtaking Landscapes

Weather of Sikkim in August is perfect for visiting Khangchendzonga National Park. It is an abode of beauty, flora and fauna. More than 500 different species of birds can be seen here. The landscape surrounding the park is ethereal giving you various opportunities to not only click pictures of flora and fauna but also of the serene landscape.

Small and exotic, Darap Village is a must place for travelers to visit in Sikkim in August 2021. Enjoy the mesmerizing views of the lush green valleys and landscape during the month of August. Feel the fresh breeze of air, sipping a hot cup of coffee from the balcony of your rented cottage. Get to know about the local culture and hospitality of people during your stay at the Darap Village.

Suggested Read: A-Z Guide To Make Your Honeymoon In Sikkim An Affair To Remember In 2021

One of the highlighted places to visit in Sikkim in August 2021 is the Seven Sister Waterfalls located on the Gangtok-Lachung Highway. The waterfalls flow fiercely during the rainy season that is July and August and looks captivating. The rumbling of the falls soothes the senses and the breathtaking landscape fascinates the eyes. This is a must visit place in Gangtok, Sikkim during the monsoon season. An array of seven falls flowing side by side on a rocky mountain surrounded by lush green valleys looks enthralling.

Suggested Read: Sikkim In June: A Complete Guide On How To Experience It Best

This one is one of the most important and oldest monasteries in Sikkim. Located at a high altitude, the monastery offers serene views of the valleys and the mountains during the month of August. The architecture of the monastery is worth-noticing which is built in Chinese Pagoda style. Learn a lot about the Buddist culture and traditions on your trip to Sikkim in August 2021.

Located 55 km from the main town of Sikkim, Bakthang Waterfalls is another happening place to enjoy Sikkims climate in August. Not so huge but quite appealing, Bakthang Waterfalls in Sikkim serves as one of the best picnic spots in Skkim during the August days. The water flows with great speed and the rumbling of the water is soothing. The serene aura of this place adds more charm to the overall beauty of the falls. Away from the citys hustle-bustle, the falls serve as one of the best places to spend a few moments of peace and seclusion in the misty air while traveling to Sikkim in August 2021.

Feel the real charm and beauty of Sikkim in August when the lakes, waterfalls and lush green valleys glisten and come back to life after the summer season. Book a trip to Sikkim in August to feel nature’s bliss and cool breezy air. Now when you have known everything about visiting Sikkim in August, do not hold further and get ready to explore the unseen side of Sikkim in the month of August.

15 Vibrant Sikkim Festivals To Enjoy On A Vacation In 2021

A-Z Guide To Make Your Honeymoon In Sikkim An Affair To Remember In 2021!

Zuluk Sightseeing In 2021: A Traveler’s Guide For Unseen Places In Sikkim!

Tso Lhamo Lake: Visit The Highest Lake In India On Your Sikkim Trip In 2021