Snorkeling Vs Scuba Diving: Which One Are You Ready For? 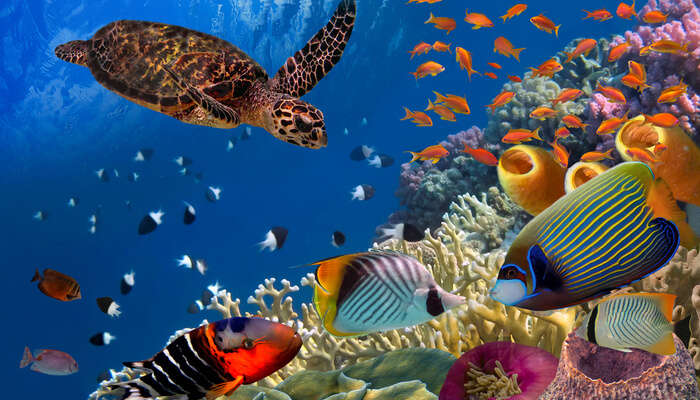 Snorkelling is an act or practise of swimming through a body of water being well equipped with a diving mask, a breathing tube known as snorkel and even swim fins if required. To make a note of, a wetsuit is required in swimming in cooler waters. On the other hand, scuba diving is a mode of underwater diving where one uses a breathing apparatus. There is an ample number of places around the globe known for being some great spots to offer snorkelling and scuba diving and in this article below, we shall read and discuss all the important factors attached to these adventurous activities such as best places to practise it and for sure its costs and features. Choose your pick – Snorkelling vs Scuba Diving!

Spots For Snorkelling Vs Scuba Diving

Find below all the famous spots for each of these spots. These mentioned below offer an experience that is definitely unmatchable!

Snorkelling can surely turn out to be fun for those who are just getting adapted to the idea of witnessing the marine life up close. Here are all the spots that you can try out!

The Great Barrier Reef, Australia: This is one of the best spots for snorkelling while watching the brilliant marine life and it is considered to be the world’s largest reef system owing to its 2,900 individuals’ reefs and coral cays which is said to be stretched over 1,400 miles off the Queensland shoreline. The Great Barrier Reef is magnificent having more than a thousand fish species let alone six species of sea turtles and other known and unknown species ruling the reef can be spotted while snorkelling here.

Komodo National Park, Indonesia: This beautiful National Park is centrally located right along Indonesia’s Lesser Sunda archipelago while a chain of volcanic islands stretched eastward from Java. Since its inception in 1980, the place was declared a UNESCO World Heritage site right about six years later and Komodo National Park owns its reputation for being one of the best places in the world for snorkelling. Owing to its unique features and undoubtedly beautiful and exotic marine where dugongs, manta rays, sharks and over 1,000 species of tropical fish can be widely spotted does make this place nothing but simply perfect for the co-called snorkelling.

Baa Atoll, Maldives: This magnificent place which is well recognised for snorkelling is located in the southwest of India which has more than 1,200 picture-perfect coral islands decently surrounded by the aquamarine waters where it’s home to hundreds of vivid fish species and endless other marine animals which includes sharks, octopi and the fascinating manta rays. Baa Atoll is a UNESCO Biosphere Reserve and certainly one of the best in the 26 Maldives geographical atolls. You can witness the very large groups of coral reefs in the Indian Ocean and a hundred of manta rays which can be well spotted between June and November.

Madang, Papua New Guinea: Papua New Guinea is well located in the north of Australia in the Coral Triangle and it is profoundly known as the Amazon of the ocean. It is known for boasting its magnificent aquatic species such as barracuda, tuna, snapper and the very amazing reef sharks. Even as the place is so widely visited by snorkelling freaks, the place still manages to remain pristine and plentiful. To add some more details, just offshore from Madang, there is the magnificent volcanic seamount called Planet Rock. To make a note of, for those who love diving deep, it is also possible to witness the WWII wrecks nearby to explore.

Maui, Hawaii, United States: The lush island of Maui boasts its unique lava rocks and coves and it is known to be one of the best places for snorkelling owing to its several technicolour fish, sea turtles and a magnificent coral formation. Just a few steps away is the Ahihi Kinau Natural Area Reserve known to be a perfect place for beginners to explore and enjoy the very fascinating undersea life. There is another plenty of marine life to watch and witness such as rainbow fish, eagle rays, monk seals and very beautiful and lovely sea turtles.

Must Read: Snorkelling In Vietnam: Witness The Enchanting Underwater Life At Its Best In These Spots!

Scuba Diving is one of the most thrilling and rewarding water sports. Giving one a chance to spectate the colorful marine life up close is truly remarkable! Try out the best of experience in the top places mentioned below!

Barracuda Point, Sipadan Island, Malaysia: This is certainly one of the best spots for scuba diving where you can witness some decently magical yet very beautiful marine life and it is for sure one of those finest walls of coral where sharks come cruisin by. It is well known to boost its amazing white tips, turtles, barracuda, grouper, jacks and parrotfish.

The Yongala, Australia: It is well located off the coast of Queensland and is known to boast a very fascinating marine life where you can witness manta rays, sea snakes, octopuses, bull sharks, tiger sharks, turtles and spectacular coral. This is said to be the perfect place for scuba divers and for sure it’s worth your time and money.

USAT Liberty, Bali, Indonesia: This has to be the very fine spot for scuba diving, let alone it’s home to several photographers seeking for some good and some decent picturesque images. The very famous hawksbill turtle and the very fascinating purple Scorpion Leaf Fish let alone the Ornate Ghost Pipefish are seen here.

Richelieu Rock, Thailand: This is very well known to be a perfect spot for scuba diving owing to its magnificent marine lives such as jacks, barracuda and batfish. Along with mantas sighting, this spot is also very popular for Macro photography of ghost pipefish, harlequin shrimp, seahorses and frogfish. Currents are known to be quite strong here and to make a note of, one may need to make several dives to see the whole area.

Thistlegorm, Egyptian Red Sea: This beautiful yet very large wreck needs a couple of dives to properly explore and have a worthy experience. Dating back to history, this very place was said to have been attacked from the air and sunk in 1941 when it was carrying a cargo of war supplies such as rifles, motorbikes, trucks and train carriages. Divers might experience strong currents in various directions at the surface right at the wreck.

Suggested Read: 8 Interesting Places For Scuba Diving In Sydney in 2022

Costs For Snorkelling Vs Scuba Diving

The average cost for snorkelling can be about INR 1000 for 30 minutes while an average cost for scuba diving can sum up to INR 17000-20000 if not less. But the experience that both of these water adventures provide are completely different. Once one is adapted to Snorkeling, they should definitely try out scuba diving to get closer to the base!

Suggested Read: 9 Famous Spots For Scuba Diving In Seychelles In 2022!

Features Of Snorkelling Vs Scuba Diving

Standard features for snorkelling may include a comfortable mouthpiece which shouldn’t be too small or too big, a plastic tube with the proper diameter and should have rounded to avoid breathing resistance. There should be an attachment system on the mask strap which should enable you to adjust for comfort whenever required. On the other hand, during scuba diving, one should carry their source of breathing gas which is usually compressed air that would allow them greater and better freedom of movement which is much needed in longer underwater endurance.

Further Read: 5 Best Destinations For Snorkelling Near Grand Bassin Mauritius You Must Visit

Snorkelling vs scuba diving, both are those underwater activities which are widely loved and carried out in different parts of the world. There are several places around the globe which are quite popular to allow those marine lovers to try their luck underwater and witness the world of the marines on the international trip.

Snorkelling is a practice of swimming through a body of water with some required equipment.

What is scuba diving?

Which are the famous places known for snorkelling?

Great Barrier Reef in Australia, Komodo National Park in Indonesia and Baa Atoll in the Maldives are considered to be the very best places for snorkelling amongst the several other spots.

What are the famous places for scuba diving?

Barracuda Point, Sipadan Island in Malaysia and the Yongala in Australia has earned their name and fame for being highly reputed and recognised when the term scuba diving is concerned.

What is the average cost incurred in snorkelling?

An average cost can sum up to INR 1000 for a 30 minutes snorkelling activity.

What is the average cost incurred in snorkelling?

Is scuba diving safe for beginners?

It is known to be quite safe to try scuba diving provided one should be well aware of the possibilities of any given risks and should be aware of tips and tricks to deal with any uncertainties.

Scuba Diving In Pondicherry: A Handy Guide To Experience This Adventurous Activity In 2022

4 Amazing Beaches in Trincomalee Worth Exploring In 2022!

Snorkelling In Moka: Best Sites In And Around Moka In Mauritius