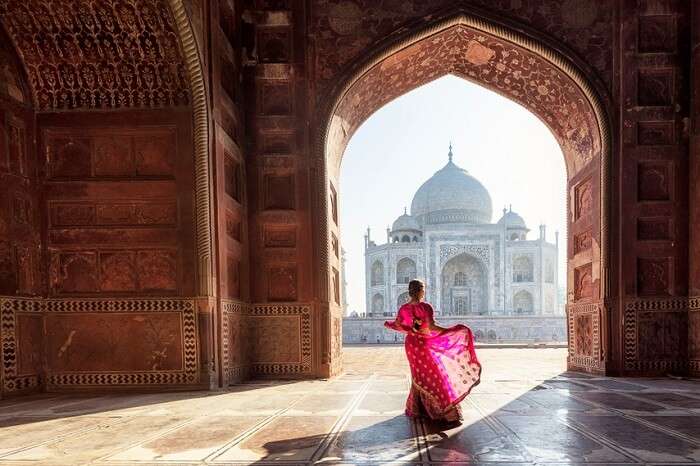 Famous poet Rabindranath Tagore portrayed it as ‘a teardrop on the cheek of the universe’ and Rudyard Kipling called it ‘the embodiment of all things pure’. Mughal emperor Shah Jahan famously said – “it made the moon and the sun drop tears on it”. What is it that we are talking about? Of course the one and only Taj Mahal, a monument built out of immense love and memory, a monument that made hundreds of thousands of people bow down to their knees, a monument that made the city of Agra a famous and widely visited tourist spot in India. It is a place where you’ll fall in love with the Mughal Era and pleasure yourself with the architecture and royalty. And have you seen Taj Mahal at night? If not, then let us tell you it is one of the most magnificent sights ever!

About The Taj Mahal In India

People widely consider it as one of the most beautiful buildings in the world. Located in the historical city of Agra, the Taj Mahal is called as the ‘symbol of love’. A wide range of visitors come around admiring the beauty of the monument and appreciate the architecture. Taj Mahal is known as the Crown of Palaces in Persian, giving a breathtaking sight to its aficionados.

Regarded as one of the finest illustrations of Mughal architecture in India, Taj Mahal is a UNESCO World Heritage Site. One of the best parts of visiting the Taj Mahal is to appreciate the elegance of aptness of extents and luxuriousness of geometrical prototypes of such gracefully done gardens that enhance the dignity of the Taj Mahal, adding glory to the slenderness of this symbol of love, perseverance and beauty.

Must Read: Top 12 Summer Festivals In India You Must Plan Attending In 2022!

One is advised to visit the Taj either during sunrise or sunset since these two timings in the day provide breathtaking views of this monument against the colors of the sky. Also, one should visit Agra between October to March as the weather is perfect for sightseeing and the scorching heat won’t bother travelers who come to visit the Taj.

The famous Taj Mahal story always tends to intrigue listeners! The Taj was built by Emperor Shah Jahan in the loving memory of his third wife, Mumtaz Mahal, who is said to have passed away after giving birth to their 14th child in 1631. Call it a symbol of immense love, the emperor was left so heartbroken that his hair turned grey eventually in grief. That’s when he decided to build a memorial in her memory and the construction began the following year, 1632.

It is said that the main building took eight years to finish. The whole monument wasn’t completed until 1653. The sad part is, Shah Jahan was overthrown by his own son Aurangzeb soon after the building was finished. He was imprisoned inside the Agra Fort for the rest of his life where he used to look at his remarkable creation through the window, admiring it and remembering his beloved Mumtaz. He died in 1666 and was buried alongside his wife Mumtaz inside the tomb of Taj Mahal.

It is said that over 20,000 people from India and Central Asia were recruited to work on the architecture. Shah Jahan was keen to bring some specialists from Europe to produce the delicate white marbles and pietra dura (marble inlay work), which was made up of thousands of semiprecious stones. In the year 1983, the Taj was given a highly reputed designation and it was recognized as a World Heritage Site. It underwent a big restoration project in the early 20th century. It is not just the beauty of this glittering white marble structure but also the Taj Mahal history that attract people from around the world to Agra.

Any Taj Mahal information is incomplete without mentioning some interesting details about this place. Being one of the seven wonders of the world itself makes the Taj Mahal location an interesting spot to visit and explore. But here are some of the facts that we didn’t know about earlier. Let’s dig some of them:

Suggested Read: 30 Places To Visit In India In April 2022: Beat The Heat This Summer Like A Pro

The entry fee for this monument differs for the citizens of different countries. The normal fee structure is such:

Note: Photography and videography are permitted inside the premises, but not inside the mausoleum. Tripods are strictly forbidden. Make sure you remove or cover your shoes before entering.

8 Places To Visit Near Taj Mahal

Though the Taj is everything needed to soothe your eyes, here are a few places that you might want to consider on your trip to Agra:

A famous tourist place near the Taj, Agra Fort is the place where Shah Jahan was imprisoned for the rest of his life. A beauty to admire, this fort was built by Emperor Akbar in the year 1565. It is made up of red sandstone and it is also regarded as a UNESCO World Heritage Site.

Located in Sikandra, Akbar’s Tomb is the resting place of Emperor Akbar. It is only 13km from the Agra Fort. It was completed by Akbar’s son Jahangir and it has 99 names of Allah inscribed on it. The architecture is different than other Mughal monuments, yet quite fascinating which is why it is one of the best places to visit in Agra.

Located at a fair distance of about 2.5 km from Taj Mahal and about a 1 km away from the popular Agra Fort, you’ll discover one of those four famous and pristine temples that are dedicated to Lord Shiva. Each of these are standing on each of the four corners of Agra and are an unmissable part of your itinerary. The temple is surrounded by the markets of the ancient Mughal era.

Suggested Read: 15 Spectacular Festivals In March 2022 That Will Tell You About The Greatness Of Culture

It was built by Babur in 1528 and it is considered to be the oldest Mughal Garden in India. It is located on the banks of the Yamuna river, less than 3 km away from the Taj Mahal. A visit to Ram Bagh is soothing and a must if you are visiting the Taj. This garden was earlier called the Aram Bagh, or the Garden of Relaxation in literal terms before being renamed.

The holy city of Vrindavan awaits your presence as it is one of the most pious pilgrimages in India. If you happen to be a firm devotee of Lord Krishna, this place is your heaven on earth as there are several temples in Vrindavan. It is said to be home to around 4,000 temples, each telling epic tales of Lord Krishna.

A visit to Agra definitely calls for a visit to the imperial city of the Mughal Dynasty, that is, Fatehpur Sikri. One can witness beautiful alchemy of different architectural styles and the concept of Islamic designs in the mausoleums, buildings, arches, and columns. There are several places to visit in Fatehpur Sikri and the best ones are Diwan-I-Aam, Diwan-I-Khas, Jodha Bai’s Palace, and Panch Mahal.

Agra is full of architectural vistas to explore and one such place is Dayal Bagh. It is a structure of 110 feet height and it is built with pure marble. While exploring the place, one can witness the famous pieta-dura inlay work that enhances the true beauty of this place. The followers of Radha Swami must be aware of this place as it houses the samadhi of Swamiji Maharaj, the founder of Radha Swami.

How To Reach Taj Mahal

As Agra is well-connected with the major cities of India via different transports, it has never been difficult to reach the Taj Mahal. So, here are the main ways to reach this ‘symbol of love’:

Agra is equipped with its own airport which is approximately 7 kilometers away from the city center. This is the fastest way to reach Agra from any part of India or the world. As several airlines travel here regularly, it is not difficult to find a ticket on one of the Indian airlines. From the airport, you can hire a taxi to reach the Taj Mahal.

Agra connects very well with the rest of the country via railway. The main railhead here is Agra Cantonment and there are two other railway stations – Agra Fort and Raja ki Mandi. Some of the most popular trains plying to nearby cities are Taj Express, Shatabdi, Palace on Wheels, and Rajdhani. There are cab or taxi services easily available at the premises to reach your further location.

If you are traveling from any nearby city, then the best option is to plan an amazing road trip to Agra. Moreover, A/C buses, non-A/C buses, and state buses also ply between close places like Mathura, Delhi, and Jaipur. So, one can opt for bus service or drive themselves to Agra.

Intrigued? We bet you are. Now just take a trip to Agra and marvel at this magnificent piece of our heritage that speaks volumes about our past. Discover what secrets it holds and what makes it irresistible for those visiting India. And if you know anything more about the Taj Mahal that you feel should be included in this guide, let us know in the comments below.

Q. Why was the Taj Mahal built?

A. Taj Mahal was built by Shah Jahan in memory of his wife Mumtaz Mahal.

Q. How many Taj Mahal are there in India?

A. There is just one Taj Mahal in the world, but there is a replica of the Taj made by Emperor Shah Jahan’s grandson, Prince Aazam Shah. He had built it in the memory of his mother, Dilras Banu Begum. It is known as the Bibi Ka Maqbara which means ‘Tomb of the Lady’. Its resemblance to the Taj Mahal also got it the name ‘Taj of the Deccan’. Bibi Ka Maqbara is located in Aurangabad of Maharashtra.