Bangkok In June: Explore Bangkok On A Shoestring Budget 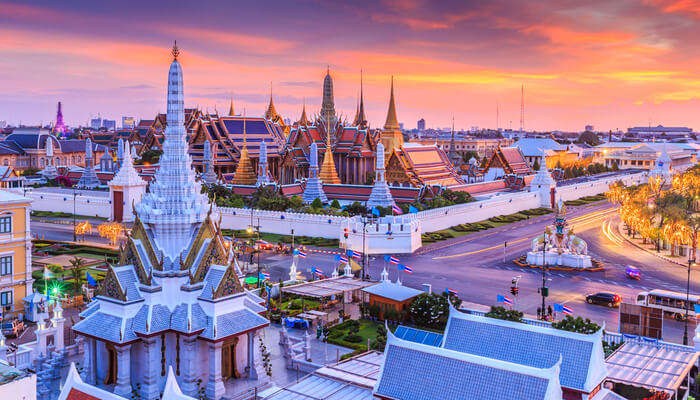 Officially named as “Krung Thep Maha Nakhon,” Bangkok is a fast-paced metropolis known for its towering skyscrapers, pulsating nightlife, and summer heat. Housing a population of 8 million, Bangkok, without a doubt, is the largest city in Thailand. It is home to vibrant locales, wonderful temples, etc. The city’s vivid aura would surely put travelers into a trance. Be it a honeymoon getaway, a family expedition, or a solo trip; Bangkok in June will be easy on your pocket. Be it the palpitating nightlife or the exotic Thai cuisine, Bangkok’s hospitality is unparalleled. Every step in the city unfolds a new opportunity for a possible adventure!

Weather Of Bangkok In June

Why Visit Bangkok In June

Image Source
Are you ready to witness the largest beach party in Bangkok? Yes, feel the shores of the beach and peppy music exhilarating the level of craziness during these trance parties that are organized in June. More than thirty thousand people visit the beaches of Bangkok to be a part of the world-famous beach parties. The main concept behind these parties is to celebrate the phase of the moon with endless vigor and liveliness. Boozing, dance, music, and endless fun are the main aspects of these parties. This could you one major reason to take a Bangkok trip in June.

Must Read: Choose Bangkok Tuk Tuk Tour For An Experience Of A Lifetime In This City

2. Bangkok Is Relatively Cheaper In June

Image Source
Since not being the peak season, travellers are accredited with various discounts and offers on accommodation, flight tickets, etc. Travellers planning a blissful expedition to the city are advised to visit this aesthetic destination in the month of June as the temperature is relatively cooler than the initial months of summer.

Suggested Read: 24 Spectacular Things To Do In Koh Samui For A Fulfilling Holiday In 2021!

Most Popular Places To Visit In Bangkok In June

Image Source
Situated at the heart of Bangkok, Khao San Road is a must-visit location for every tourist visiting the city. Street food vendors, shopping centres, bars, nightclubs, massage parlours, high-end restaurants, you name it and they have it! The street is the most famed market in entire Bangkok. With the onset of dusk, the street transforms into a shopping centre. Travellers on a budget will find a wide variety of products that are available at pocket-friendly prices. From cheap clothing to mouth-watering street food, Khao San Road has got you covered in every aspect!

Suggested Read: A Sojourn In Thailand Or Bali For Honeymoon In 2021? We’ll Help You Decide

Image Source
Hailed as a prominent Buddhist Temple, Wat Pho situated in the Phra Nakhon District, Bangkok. The temple is allegedly considered as the earliest centre for public education. The temple is known to house a school of Thai medicine and has birthed the traditional Thai massage. Travellers from all around the world visit the Temple in order to witness the presence of the large reclining Buddha. The temple is famously called the “Temple of Reclining Buddha”.

Image Source
Chinatown and shopping go hand in hand. The commercial hub is situated along the Yaowarat road and is known for its pocket-friendly bargains, traditional Chinese goods, delectable food and numerous Buddhist temples. Travellers are advised to visit Chinatown at night in order to experience the vibrant aura of the region. So, what are you waiting for? Come and lose yourself in the alleyways of Chinatown with traders and vendors on either side, selling old generational goods.

Suggested Read: Our Anniversary Trip To Thailand Made Us Fall For Each Other All Over Again

Image Source
Used as a source of commuting by 50,000 denizens on a daily basis, Chao Phraya River is the primary waterway in Thailand. The river flows through the heart of Bangkok and precedes fertile to the Gulf of Thailand. Owing to its fertile alluvial plains, Thailand’s past and present capitals have all been situated at the banks of the river. The picturesque view of the scintillating river is a memorable one that I will always remember and cherish.

Suggested Read: Thailand 7 Days Trip: There’s So Much To Learn From Rakshita’s Experience

Image Source
Hailed as a timeless architectural masterpiece, the Grand Palace has been the residence of several royal ancestors. The Palace is home to a sacred Buddhist temple now, Wat Phrae Kaew which was constructed in the year 1782. The Palace is one of the major tourist attractions in Bangkok and an emblem of Bangkok’s history and culture.

Suggested Read: Thailand In September: A Pocket Guide For An Amusing Vacation In 2021!

Image Source
Situated in the heart of Bangkok, below the Siam Paragon Mall, Sea Life is an underground aquarium that features various aquatic species. Sprawling across 110,000 sq feet, Sea Life is one of the largest aquaria to exist in South East Asia. The aquarium houses sharks, crabs, octopuses, penguins and a wide range of fishes. If you ever plan to visit Bangkok, do visit the enchanting Sea Life Ocean World.

Suggested Read: 5 Surreal Things To Do On Thailand Honeymoon That No One Except Rohit Knows!

Things To Do in Bangkok

The city’s vibrant culture has garnered a lot of attention from travellers across the globe. The city is adorned with magnificent architectural pieces that are a work of supreme craftsmanship. The pulsating nightlife certainly speaks volumes about the city’s spiritedness and Invigoration.

Image Source
Travellers visiting Bangkok must explore the Sky Train for a different and offbeat experience. For an exciting and fun-filled pursuit, the ticket is quite cheap. The train runs in two lines or phrases. Tourists will certainly enjoy the beautiful cityscape of Bangkok by opting to travel via this route.

Image Source
A Good Massage Therapy, you say? Who would say no to that? Being the birthplace of Thai massage, Bangkok features an array of massage and spa treatment centres. The effective benefits of the Thai massage would certainly shed any sort of stress and would help to keep anxieties at bay. A wide range of techniques is employed to target specific areas of the body so that tension is released from every part of the body.

Suggested Read: Our Family Trip To Bangkok Was All About Indulging In Epic Adventures In The Vibrant City

Image Source
Out of all the marvels Bangkok has to offer, Chao Phraya River definitely shines the brightest. Travellers can opt for a boat cruise to enjoy the magnificent cityscape of Bangkok whilst feasting on the premium buffet. The illuminated structures under the beautiful twilight will be a memory forever etched on your heart.

4. Eat Your Heart Out At Chinatown

Image Source
Not a single place comes closest to Chinatown when it comes to delectable Chinese food and delicacies in Bangkok. From high end restaurants to street vendors selling traditional snacks, the region is brimming with a wide range of food joints. If you can feel your taste buds tingling at the name of Chinese and Thai food, do visit Chinatown for an exciting ride of flavours.

Suggested Read: 7 Stunning Cruises In Bangkok For A Perfect Getaway To The Vibrant City

Image Source
Riding a Tuk-Tuk allows you to experience the true essence of the city. At first, it might seem a little different and silly, but after some, you wouldn’t get enough of it. Travellers seeking to try something offbeat and fun are recommended to ride a Tuk Tuk at night! Besides, it’s a great way to explore the local markets for late night shopping or dining.

6. Ride A Rollercoaster For Amusement!

Image Source
Dream World Amusement is brimming with exhilarating pursuits that would surely get your adrenaline going. The Amusement Park is an idyllic destination for families who are yearning for some thrill in Bangkok. While the park is stacked with numerous slides and enthralling rides that are specifically built for adults, it also features themed attractions and cartoon characters that young ones can explore and enjoy. The little ones are usually into Super Splash, Snow Land, Vikings and Space Mountain.

If you happen to be a little too obsessed with shopping, then don’t worry! Bangkok has got you covered with its numerous shopping complexes and centres. If retail therapy is your jam then explore various marketplaces in the city!

Q. Is it rainy in Bangkok in June ?

A. Yes, you may encounter some rain in Bangkok in the month of June.

Q. Is June the hottest month in Bangkok ?

A. June is hot but not the hottest in Bangkok. Hottest month is usually April or May.

Q. What should one wear in Bangkok in June ?

A. Light summer dresses including bermuda shorts for men, skirts/shorts for ladies. T Shirts/tops or polo shirts. Collared shirts along with semi casual trousers will be a good idea for evening dining.

10 Places To Visit In Kasauli In 2021 For Nature Lovers

8 Picnic Spots Near Alwar For An Escape From The Hustle-Bustle Of Life In 2021!

10 Most Incredible Places To Visit In Ladakh In June That Will Leave You Mesmerized!

12 Beautiful Places To Visit In Yelagiri In 2021 That Make You Fall In Love With Nature!