13 Famous Festivals In October In India In 2022: Mark Your Calendar Now! 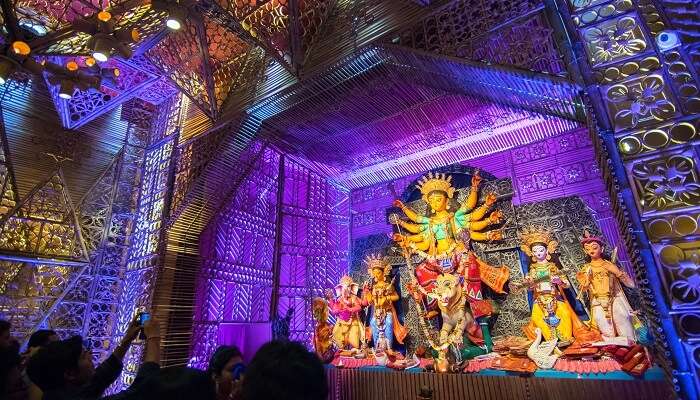 October is a month of vibrant festivals and bountiful celebrations. Starting from Navratri puja, the festive mood lingers on till Diwali and Bhai Dooj. The huge number of festivals in October in India makes it a joyous month when spirits are high, lots of family time is on the cards, and meals are nothing short of a feast.

Have a look at this list of the festivals in October and plan a holiday in India accordingly. But before that, take note of the dates of these festivals in 2022!

Top 13 Festivals In October In India To Celebrate This Year

From the traditional and religious festivals to the centuries-old folk music and art festivals, there are plenty of celebrations that take place in the country. Here is a list of a few of the many Autumn festivals in India that are celebrated together.

Religious Festivals In October In India

Here are some of the best and famous festivals celebrated in the month of October all over India with much grandeur and joy. 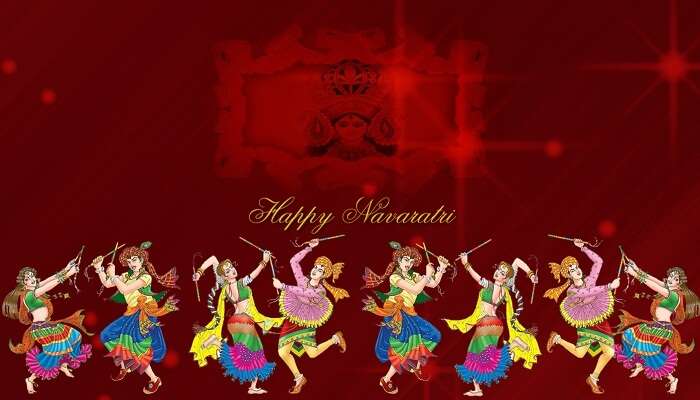 Navratri – a nine nights long celebration – is one of the most observed festivals in October, seen mainly in northern part of India and Gujarat. While the people of the northern states follow a religious fasting regime, those in Gujarat showcase a more vibrant fiesta. Every year people get engrossed in the highly enthralling Dandiya & Garba dances to honor and worship Goddess Amba in nine different avatars.

2. Dussehra – Victory Of Good Over Evil 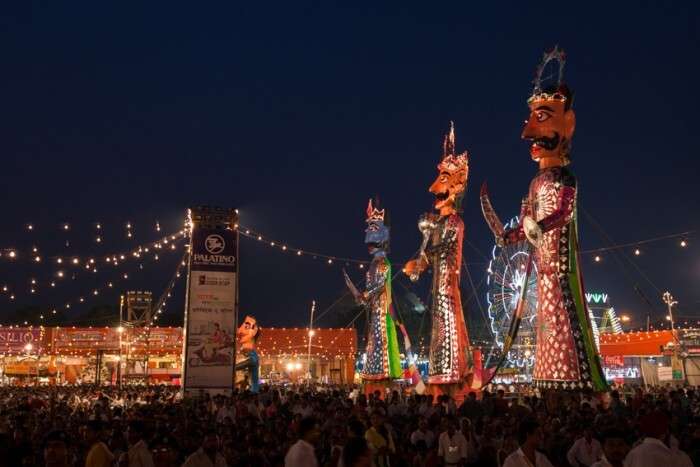 Dussehra is celebrated pan India with utmost joy and delight. This is one of the most popular festivals in October in India and marks the demise of Ravana, Meghnath, and Kumbhakarna. It is also popular as Vijaya Dashami. Along with Navratri, Ramlila is enacted for nine days and the 10th day – Dussehra – is celebrated with the enactment of Ravan Dahan.

Kullu Dussehra: Kullu (Himachal Pradesh) is also well known for Dussehra celebration with its international folk festival, phool yatra, Kullu fair, and Naina Devi fair. The 10 days’ affair is also regarded as one of the popular festivals in October in India and is celebrated with international folk festival, Naina Devi fair, Kullu fair, and phool yatra.
Key Attractions: Burning of effigies of Demon king Ravana, Kumbhakarna, and Meghnath
Dates For Dusshera 2022: 5th October
Where: All over the country

Dussehra In India: 10 Places To Welcome The Best Celebrations In 2022

Durga Puja is among the most important festivals in October in India, celebrated by the Bengalis all over India. The gala affair engrosses the people with grand celebrations. Pandals are set up in every locality and Durga idol is worshiped there. People in their best attires go for pandal hopping (even during midnight) and extravagant feasting.

Festivals In Darjeeling: 8 Popular Celebrations On Queen Of The Hills In 2022

4. Mysore Dussehra – One Of The Popular Festivals Of South India 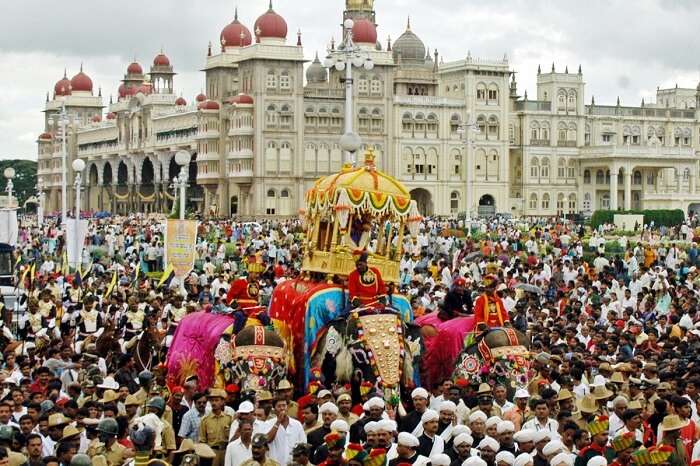 Mysore Dussehra, also known as Nada Habba, is an age-old festival celebrated in Mysore. Here, the gala victory of Chamundeshwari over Mahishasura is celebrated with grandeur. The last day is marked with a royal rally with a decorated elephant carrying the worshiped idol. Needless to say, this festival lights up the town of royalty and makes it look even more spellbinding. If you’re planning a trip to Mysore this year, make sure you visit it in October and attend this festival.

5. Diwali – The Festival Of Lights 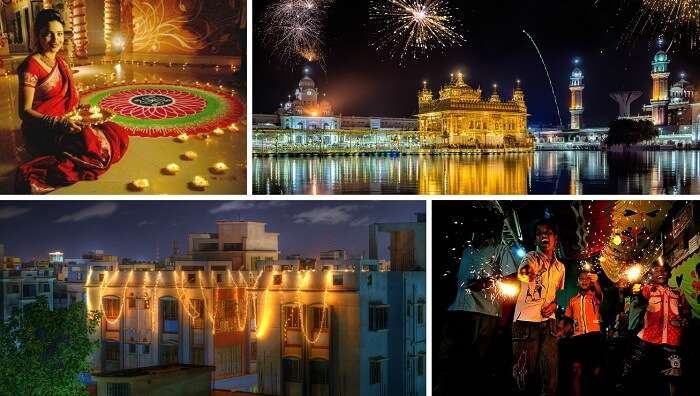 Celebrated by almost all communities throughout India, Diwali celebrates the return of Lord Rama, Lakshmana, and Devi Sita after 14 years of exile. The houses and streets are decorated with lights, diyas, and rangolis. People perform pujas, burst crackers, and distribute gifts on the occasion.

8 Union Territories Of India And Their Mystic Beauty 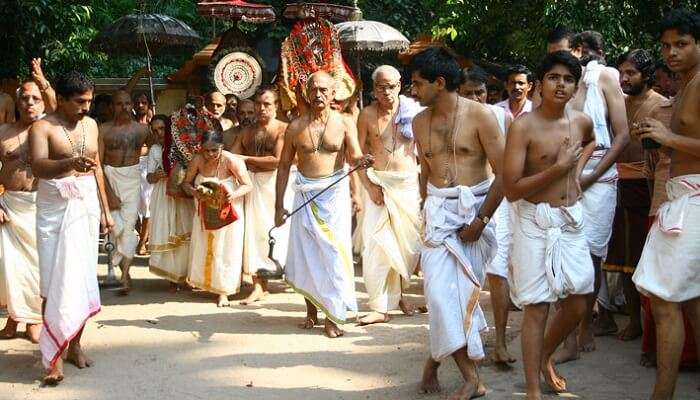 Mannarasala is a temple dedicated to the serpent Gods in the Alappuzha district of Kerala. Interestingly the temple has a woman priestess. Ayilyam festival is one of the less popular festivals in India. However, it is celebrated in the region with grandeur and delight. So, make sure your Kerala trip itinerary included a visit to this festival as while it may not be very famous, it is surely a celebration of its kind.

36 Most Famous Festivals Of India You Must Experience In 2022

7. Ramnagar Ramlila – A Narrative Of Ramayana 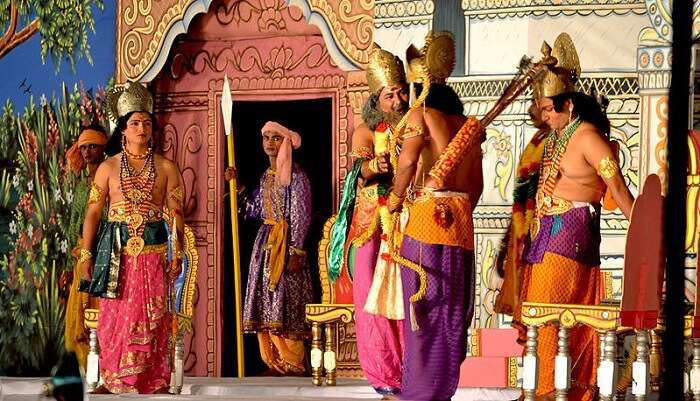 Whoever follows the festivities and the mythological stories of the Hindu culture knows the importance of Ramlila. Ramlila is a theatrical performance that narrates the tale of Hindu epic Ramayana and takes place all over the country during the time of Dussehra. It is among the famous festivals in October in India that is celebrated by the Hindus. The oldest one is Ramnagar Ramlila that has been up and running for almost 200 years now. The beauty of this festival is the extravagant sets, the performance that takes place against the banks of River Ganga in Varanasi, and the intense feeling that the artists manage to develop.

15 Offbeat Places In South India 2022 That Will Make You Go ‘WOW’ With Natural Beauty!

8. Bathukamma – Celebrate Life With The Southerners 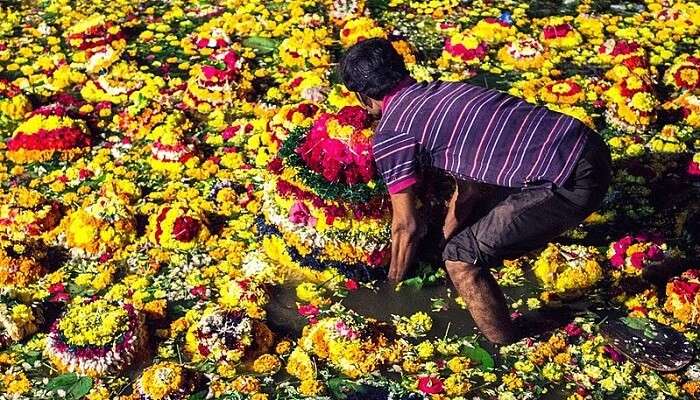 Famous in the state of Telangana in the southern part of the country, Bathukamma is a festival that takes place around the same time as that of Navaratri. This is a flower festival that is devoted to celebrating life and Goddess Maha Gauri. For those who wish to celebrate the happiest festivals in India can consider being a part of Bathukamma. Celebrating the incarnation of Goddess Durga that is known to be a life-giver and the Goddess of womanhood, this town goes gaga over various shaded flowers. There is a temple tower structure that is completely built using flower arrangements. It is a celebration like no other.

Key Attractions: Women singing old folk songs and procession of the Bathukammas on the last day
Dates For Bathukamma 2022: 25th September
Where: Telangana

Longest Rivers In India: Know About The Important Water Bodies Of The Country In 2022!

These are some of the best art and cultural festivals which are celebrated with much vigour throughout the country.

9. India Art Festival – The most contemporary art fest in India 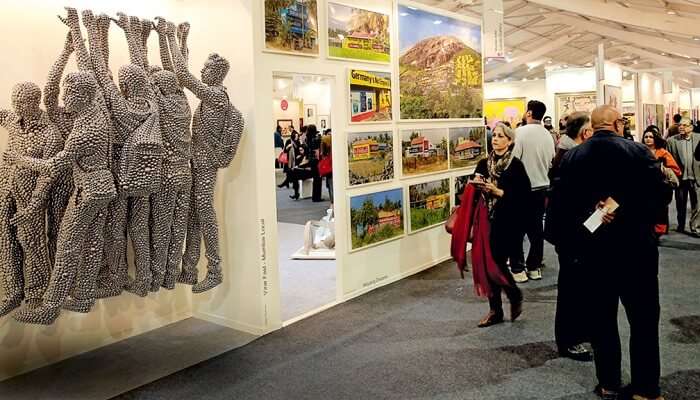 India Art Festival is a contemporary art festival where art buffs, art buyers, connoisseurs, history freaks, publishers, and critics gather for seminars and exhibitions. The objective is to provide a platform for social and business networking in the field of art and culture. One of the most popular cultural festivals in India, the India Art Festival showcases excellent pieces of art.

Discover 6 Incredible Rain Forests In India For A Memorable Wildlife Adventure In 2022! 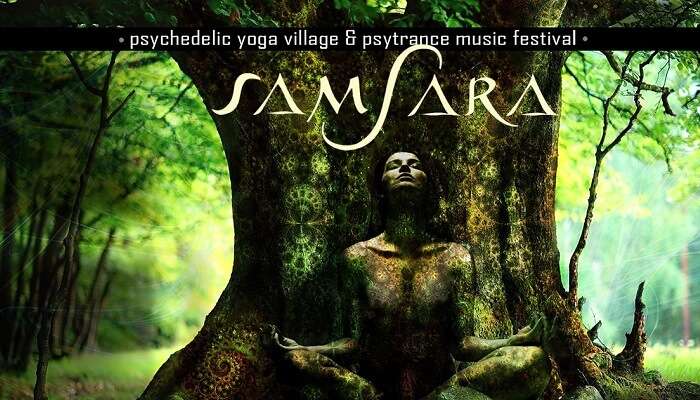 Conducted by Arya Marga Yoga, Samsara Himalaya Yoga festival is a grand annual event. It is one of the most stunning festivals in October and is meant for yoga enthusiasts and music admirers. People from all over the world with similar interests join in for the celebrations. Enthusiasts assemble at this festival to be a part of the therapeutic and evolutionary arts of sound and vision healing by skilled professionals.

14 Vibrant Festivals In August In India: Save The Dates To Rejoice In 2022 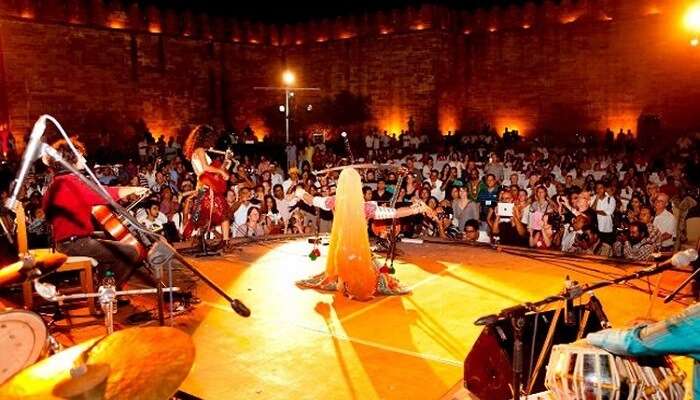 Jodhpur RIFF or the Jodhpur International Folk Festival is one of the fascinating cultural festivals in India. It is celebrated in Mehrangarh Fort of Jodhpur and patronized by Gaj Singh of Marwar. It is an international cultural gig that showcases Rajasthani traditional folk dances, music, and artwork. The event has been declared as the People’s Platform for Creativity and Sustainable Development by UNESCO. 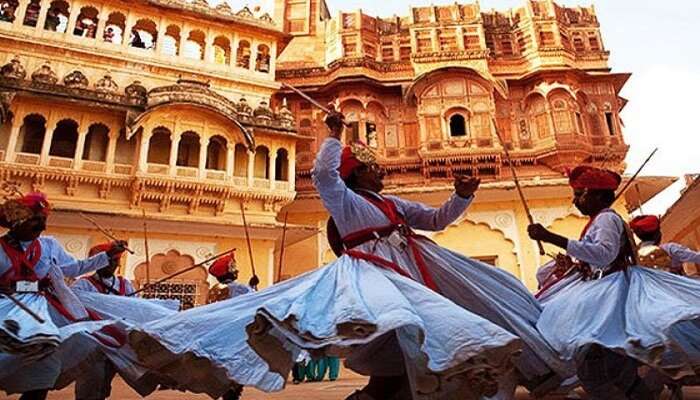 Maand is one of the most colorful Indian festivals in October. It is celebrated during Sharad Purnima for two days. Maand festival showcases traditional forms of dance and music that reflect passion and gallantry of the Rajasthani rulers. Music and dance performances are held in Umaid Bhawan Palace, Mandore, and Mehrangarh Fort. The festival enhances the beauty of these forts and it is definitely a sight worth witnessing! 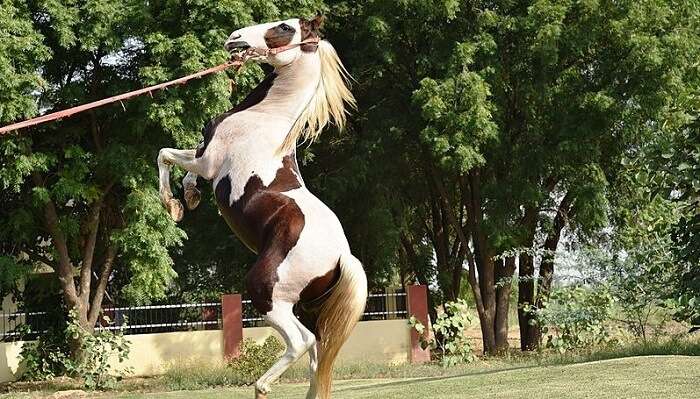 Ashwa Poojan is among the unique and lesser known Autumn festivals in India. This pooja is carried forward by the Royal Families of Mewar that reside in Udaipur. Ashwa Poojan is the festival where the Horses are worshipped by Mewaries on the last day of Navaratri. The festival is celebrated to honor the relationship that a warrior and his horse has. Rajasthanis have witnessed tons of battles where their rides have turned out to be the best support. The Royal horses are worshipped by the head of the Royal Family and the performance of the palace band accompanies it.

Scuba Diving In India: Explore The Breathtaking Underwater Universe At The 14 Best Spots In 2022

Are you excited to indulge into these festivals and enjoy a time like never before exploring the culture of the country? Then save the dates of these festivals in October in India and plan a family holiday in India. Do not forget to share your experiences with us.

Frequently Asked Questions About Festivals In October In India

Which festival comes in the month of October?

What are the key attractions of Marwar festival?

One of the most colourful festivals in India in October, Marwar festivals key attractions include horse riding, magic shows, camel tattoo shows, puppet shows, and horse polo. Happening in Jodhpur, Rajasthan this is one of the best places to visit in October in India.

Which festival comes in the autumn season?

The most awaited autumn festival in India falls in late October and early November. It is Diwali, the festival of lights which is widely celebrated by people all over India.

Gadbade festival is celebrated in Haryana on Sharad Purnima which falls in the month of October or November. On this particular day, the moon is brightest in the entire year.

Which are the famous folk and cultural festivals celebrated in India in October?

Which are the popular religious festivals celebrated in October?

Dussehra, Mysore Dussehra, Mannarasala Ayilyam, Diwali are some of the best and famous festivals celebrated in October in India.

Which festival is on 24 October?

24th of October has been celebrated as United Nations Day since 1948. In 1971, the United Nations General Assembly recommended that this day be observed by the Member States as a public holiday.

What celebrations are in spring in India?