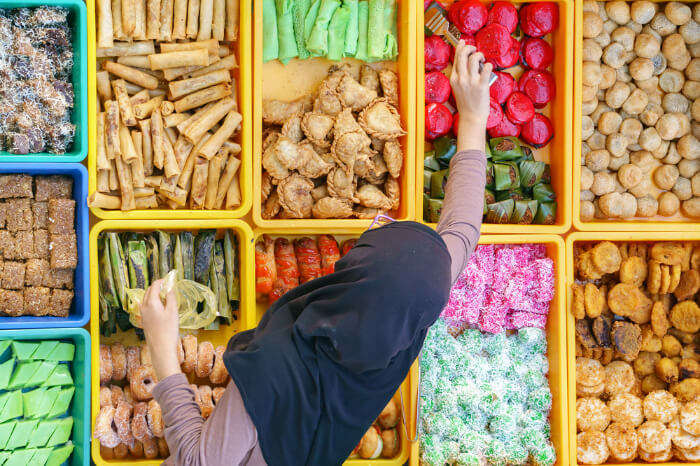 For ages, humans all over the world have been divided by their culture, customs and languages. However, some things have kept humans connected, all over the world and enabled them to have a better understanding of each other. These include the different foods present in different civilisations and the chain of commerce that links all of them. Interestingly, an amalgamation of these two walks of life has created another historic site of trade – the food markets around the world. Displaying the finest of produce and choicest of meats, these are sure to enthral every traveller’s senses and satisfy the shopping enthusiast inside the culinary connoisseurs.

12 Best Food Markets Around The World

Food markets belong to a category of must-travel places that have not yet been discovered properly by travellers and culinary connoisseurs alike. Here are some of the best food markets around the world to set you on a sumptuous journey to discover some culinary gems that contribute to the making of masterpieces renowned all over the world.

There is a lot of immigrant influence on Canadian culinary scene, which is also evident as you walk through the St. Lawrence Market in Toronto. Three major buildings adorn the marketplace, each with its own distinctive produce on sale. The South Market is full of vendors selling the freshest fruits, veggies, meats and dairy, while the St. Lawrence Hall plays host to retail businesses dealing in food materials. The North Market houses the Saturday Farmer’s Market, which is a tradition in itself for the last 200 years. If you happen to visit the market on a Sunday, you can also enjoy the weekly antique sales which offer tourists a slice of Canadian history. While you visit this marketplace, do try some of the local delicacies on offer here.

Must Read: 15 Rivers Of The World: Soak In The Mesmerizing Sights Around The World

This market is unique in every sense of meaning, with the list of market sellers changing every week. The market is open on Monday, Wednesday, Friday and Saturday all year. Being located in New York, the market offers buyers organic vegetables from local farms, locally baked products and exotic cuts of meat. Guests can also find some delicious street food being served from food trucks here to satiate their hunger while going through the market.

The Mercado Central is a witness to both throngs of people and utter desertion, with a fire destroying this historic site in 1872. Since rebuilding, this site plays host to a variety of seafood, cheese, fruits and vegetables. Tourists can also enjoy some locally made empanadas. For those looking for additional amenities, pharmacies and travel agencies can also be found here.

This food market has the distinction of being one of the oldest food markets in the world, with origins dating back to 1217. Hundreds of stalls located here are stocked with local delicacies to entice the tourists to try out their products. The market is best known for selling Spanish staples including offal, olives and salted cod, which is why it is also known as the foodie’s Mecca in Europe. Apart from the local delicacies, numerous bars dealing in drinks, tapas and pintxos are also present.

From its name, it can be deduced that the spices are the main focus of attraction in the marketplace. However, this market also sells every delicacy originating in Turkey to the patrons roaming in the market, including floral tea, halvah and stringy cheese. The spicy pyramids of sumac and pul biberfill the narrow aisles of this spice market. The market, functioning continuously from 1664, offers a slice of Turkish History in the form of Kanafeh, which you would not want to miss.

This market has gained international recognition in recent times, owing to its billing as one of the best fresh markets by the CNN Media Network, as well as a documentary on it as part of Gordon Ramsay’s travels to South-East Asia. Filled all year round with fresh produce, guests here can buy the latest of Thai local produce for use in South-East Asian cuisine. Although the produce tends to be on the pricier bit in terms of local currency, the cost is justified on account of its freshness, characterised by the aroma emanating from the fruits, veggies and spices.

This food market is also one of the oldest ones in London. What sets it apart from the rest of the food markets in Europe is the space allotted for the sale of the fresh produce, which is much greater than almost any other European market. Patrons can enjoy traditional meat and cider from New Forest Cider while looking for the freshest fish from the local fishmongers. The cheese purveyors here are a special attraction, with the sale of genuine Cheddar, Montgomery, Leicester and Swiss gaining prominence among the general public and the restaurateurs from Michelin-starred establishments.

Japan houses one of the largest fish industries in the world. Therefore, it should be no surprise that its capital also houses one of the largest and best fish markets present around the world. As is characteristic of other fish markets around the world, the busiest time for this market is the 5 o’ clock hour in the morning, when auctions for the fresh Tuna produce takes place. Since the space for public viewing is limited at this time of the day, it is imperative that you get up early to witness this spectacle of human civilisation. After this noisy show, do sit at one of the many sushi bars located in the market to taste the locally-made sushi and sashimi, prepared in the traditional manner. For additional shopping, you can also try the real Japanese nori, wasabi and sashimi knives.

Suggested Read: The List Of The 10 Best Airlines In The World In 2019 Has Been Revealed!

With winding alleys and stalls located in hole-in-the-wall locations, Machane Yehuda welcomes you with every product that can be sold under the sky, including housewares and spices. Patrons can shop for rugelach and other delicacies also at this food market. Special attractions here include citrus juice stalls and beauty products which are an attraction among women. For the kids and the foodies, do try the Israel version of Halva and accompanying ice-cream flavours which are 100% authentic and sources from the interior Israeli territories. For the casual tourists, the best time to visit is late Friday evening, when the Sabbath is about to start.

Although housed in a historic 19th-century building, this market is one of the most recent food markets to rise in world prominence. The produce sold here varies from locally-brewed beer to freshly picked Italian lemons. The ground floor houses shops pastries, ice creams and genuine Italian coffee, while tourists can sample some delicious fried fish sourced from the Bolognese lakes. The first-floor plays host to La Pizza di Eataly from the award-winning Eataly chain of restaurants, which treats its patrons to delicious Bolognese version of the humble pizza.

Suggested Read: 10 Local Dishes To Try Around The World This Christmas

The name of this market itself conveys the importance of this place in French history, with the Colonne de Juillet monument commemorating the revolution of 1830. The market supplies the freshest of Sauerkraut and meats apart from the creamiest of yoghurt and yoghurt-based products. The fresh fruits and vegetables sold here are one of the many reasons why most of the Michelin-starred restaurants are French with respect to location and patron cuisine. Travellers can also sample multicoloured organic eggs, freshly baked bread and authentic French cheeses, including Camembert and Comte.

This market has a historical connection with the Indian capital and its cuisine since the time of Delhi’s ascendancy as the capital of the erstwhile Mughal Empire. The market, centred at a Mughal-era bungalow, houses varieties of spices sourced from the Northern, Western and Eastern sides of the country. Billed as one of the largest spice markets of the world, one can find all types of spices here. However, the chillies here rule the roost, being the most sought-after by individuals and restaurants alike. It is worth mentioning that the best restaurants in Delhi which serve Chicken and Curry based dishes have been sourcing their highly prized spices from here, which speaks volumes about the quality of spices sold here.

Further Read: 10 Largest Castles In The World That You Must Visit At Least Once In A Lifetime!

These food markets offer all travellers varied experiences of local cuisine and culture, including the traditional culinary disciplines. A visit to these world-famous food markets is absolutely necessary whenever you are heading to any of these historic cities as part of your vacations. So, plan a trip to your favourite destination now, and feed that foodie traveler in you!