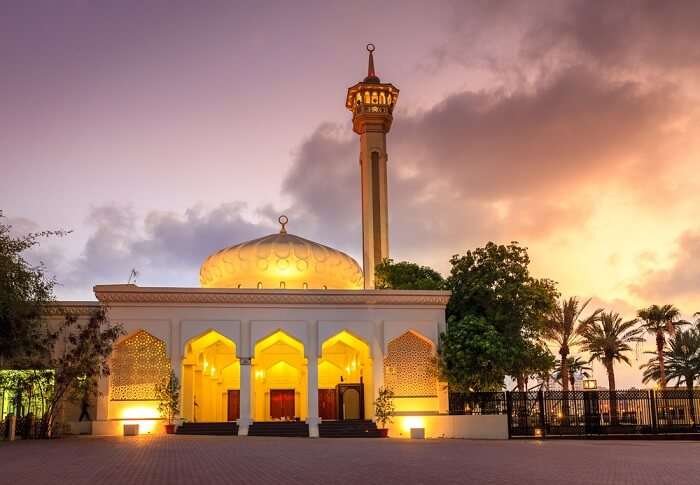 While Sheikh Zayed Mosque is the epitome of beauty and Jumeirah Mosque in Dubai a gateway to peace, Grand Mosque Dubai in Bur has always remained the hub of Dubai’s religious and cultural life.

Visiting mosques in Dubai are the best ways to learn deeply about the Islamic traditions and architecture. Located in the historic district of Dubai on the western side of Dubai Creek, Grand Mosque boasts of architecture and the tallest minaret in the whole of Dubai.

What makes the Grand Mosque an attraction worth visiting?

There are simply two reasons which make this mosque worthy of a visit:

1. To admire the astounding architecture of the mosque which has been built in traditional Islamic style and its peaceful surroundings.
2. To take photographs of the mosque in the night when it is spectacularly lit up with lights.

The Iranian mosque displays an impressive blue mosaic work which makes it worthy of a visit. There are five large Quranic inscriptions at the entrance. It has nine large domes and 45 smaller ones which exhibit fine geometrical carvings on them. The minaret is made in Altonian style. You will also find handcrafted wooden shuttering covering the windows.

Suggested Read: 12 Dubai Museums That Let You Witness The Heritage & History Of The City

How to reach Grand Mosque Dubai

The mosque is located in the Bur District of Dubai just opposite Dubai Museum. Al Fahidi is the nearest metro station to the mosque.

The visitors are advised to dress conservatively to enter the premises. Head and knees should be covered. Women should wear long sleeves top and loose clothing.

Suggested Read: 12 Places To Visit In UAE For A Lavish Vacation

Once you are done with you visit to Grand Mosque Dubai, you can also check out the nearby attractions in Dubai to have a fun-filled experience.

It is the most photographed mosque in Dubai and should definitely make to your list of places to visit in Dubai. One of the largest mosques in Dubai, it also one of the few where Non-muslims are allowed. Hop on a joined tour of Jumeirah Mosque and Grand Mosque to learn deeply about the culture of Islam.

Suggested Read: Dubai In June: What Makes It A Happening Tourist Destination Even In Summer

One of the best things to do in Dubai in winter is hopping on a Dhow to enjoy Dubai Creek Cruise. If in the daytime, the place brings warmth, in the night you can enjoy the five-star lavish dinner on the cruise. The traditional boat called Dhow is fascinating enough to hop on the boat and take a ride.

Suggested Read: 11 Things Not To Do In Dubai Or You’ll Land In Deep Trouble On Your Vacay In 2021

If you too are baffled with Dubai having a waterfall, you should go check out the Human Waterfalls in Dubai Mall which is nestled right in the heart of the mall. As tall as the building, the waterfall makes a teeming spectacle in the mall. Its dramatic design and unique charm are the crowd pullers.

Further Read: 10 Wedding Venues In Dubai For A Fairytale-Inspired Union

Dubai is one of the most sought-after destinations for honeymoon and family vacation. Plan a trip to Dubai to enjoy its noteworthy attractions, fun-filled experiences, and exciting nightlife.

31 Best Places To Visit In Haridwar In 2021 For A Spiritual Vacay One Cannot Miss!

19 Best Places To Visit In Shirdi In 2021 For Those Who Seek Nothing But Inner Peace!