A Tour Guide To The Java Island In Indonesia 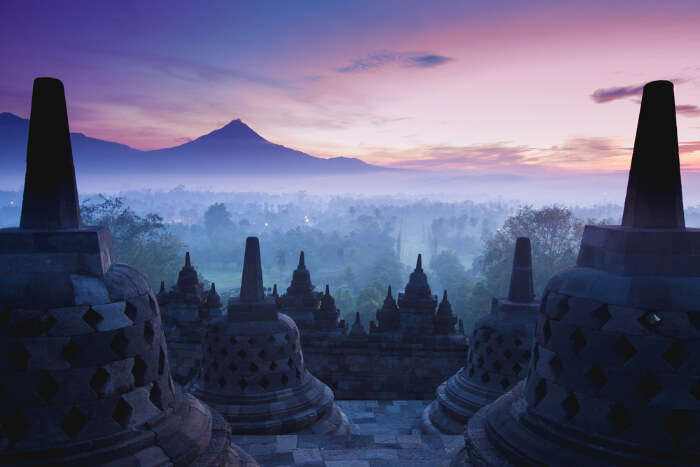 Earlier, many tourists couldn’t even locate Java Island on world map. But over the years, the island has grown as a tourist destination with its active volcanoes, ancient temples, monuments, lakes, beaches, hills, markets and tea plantations attracting travelers round the globe.

The best time to visit Java Island is between April to October . The dry seasons are usually too dry with high temperatures. The monsoons last from November to March and it usually rains in the afternoon making it infeasible for travelers.

Places To Visit In Java Island

Keep these places to visit in Java Island in your bucket list so that you don’t miss out even an inch of the fun.

Borobudur temple is one of the most popular attractions in Indonesia and the largest Buddhist temple in the world . Located in the Central Java, this temple consists of a large Buddhist temple complex. Built in the 9th century, it is now a UNESCO World Heritage Site. The temple has astonishing 72 sculpted figures of Buddha. Borobudur can be easily reached on a day trip from the nearest city of Yogyakarta. This site is a boosting element when it comes to Java Island tourism.

Sitting at an altitude of 2,100meters is Dieng Plateau, one of the best places to visit in Java Island. For those who want to visit the pilgrim places in Java Island, Dieng it is. There a many Buddhist temples in the vicinity. During your hike up to the plateau, you will come across many pools with spring water and hot springs.

Dont miss: Plan your hike to match the sunset time when reach on the top for the breathtaking view.

Must Read: 10 Best Places To Visit In Jakarta That Showcase The Other Side Of Indonesia

Bandung city is counted in one of the top shopping destinations in Indonesia on the domestic market. But it is one also the most underrated city when it comes to shopping. The place has huge range of factory outlets that sell the latest fashions. Bandung offers a wide range of clothing options to match your taste and budget. Bandung also has great eateries for you to explore Indonesian cuisine.

Dont miss: Bandung is well known for denim products. Shopping for denims is a must.

Indonesia is a country which has a large number of active volcanoes. Mount Merapi is one of the most dreaded volcanoes of Indonesia. This famous volcano had erupted in 2010 and is still active. Though it is one of the easiest hikes in Java, you can only trek here when it’s declared safe by the authorities.

Dont miss: Visit Merapi as a part of your tour so that you can have an insight into the history of the mountain and why it is a sacred spot in Indonesia.

Suggested Read: 7 Best Things To Do In Jakarta: The Indonesia Capital Buzzing With Life!

Malang, a city in the east Java, has a relaxed atmosphere and gives out ancient Dutch vibes. Located between Mount Semeru and Mount Bromo, the city has a distinctive combination of scenic beauty. Malang has a number of little temples and shrines dotting the city. It is also majorly covered with green paddy fields.

Kalibiru National Park is one of the popular tourist places in Java Island. The dense green forest, the water reservoir and the array of mountains in the backdrop make the most exotic scenic view. The picturesque viewpoint in the park is popular among the Instagramers. You can climb the trees through ladders to reach and stand on the rustic wooden platforms to get the breathtaking views. Who knows, you may even spot some wild animals and birds specific to Java Island area.

Dont miss: Go here in the morning or evening as during these hours of the day, sunlight has the best colors. Also try out some adventure activities like zip lining.

Suggested Read: Top 10 Things To Do In Indonesia For An Unforgettable Holiday Experience!

Kampung Pelangi meaning Rainbow Village in Indonesian is a part of Semarang. This area has recently emerged as a tourist attraction in the Java Island. The village was a collection of about 200 homes on a hillside, above a river. The locals wanted to draw more tourists to the area so the entire village was painted in vibrant rainbow colors. Now this small dot on the Java Island map is attracting a huge number of tourists from around the world.

Dont miss: This beautiful village is a must for your “insta” story. Get a picture clicked with the quirky village in the background.

Dont miss: Make sure yo visit the National Monument, National Cathedral and Mosque.

Suggested Read: 12 Indonesian Landscapes So Marvellous That It Hurts

Karimunjawa Archipelago has the best beaches in Java. This is interesting as there are around 27 tropical islands off the coast of Semarang, most of which are inhabited. Rent a boat and head to this beach paradise in Java.

Dont miss: The water at these beaches are crystal clear so make sure you do not miss indulging in snorkeling and diving here.

Goa Jomblang in the Gunung Kidul Area of Java Island is a famous cave. Located an hour away from the city, the cavern is 60 metres down the side of the cliff. From here, you enter a cave system, surrounded by forest. The Grubug Cave is the main cave in this site. The hole on the top of the rock formation lets the sunlight stream into the dark cave, creating a spectacular effect.

Suggested Read: 10 Holiday Homes In Indonesia For A Laid Back Island Vacation

Things To Do In Java Island

These are some of the best things to do in Java island which will keep you engaged and also let you explore the best of the history of Java.

Famed to be the second largest city in Indonesia, Surabaya is a heritage city but it recieves a very less tourist attention. Quite a historic city, the traditional architecture of the city dates back to the Dutch colonial period. Alongside this, there are museums where people can learn about the history and culture of Surabaya.

Set back, relax and enjoy the beautiful seaside town of Anyer which is known for its beautiful beaches and the mesmerizing backdrop of the Mount Krakatau. This place gives a true seaside experience while in Indonesia where travelers can indulge into some adventure activities like jet skiing and parasailing.

The Candi Prambanan is a 9th century hindu temple which is located close to the Borobudur. This is a UNESCO World Heritage Site which is known for its marvellous architecture, fine and pretty compounds and the winding alleyways which surrounds the complex.

4. Mount Ijen: Hike Through The Trails

Indonesia is a home to the majestic mountains and also shelters the beautiful Mount Ijen which is quite a lowkey attraction but worth a visit. The main highlight of the place is the large acidic crater lake which oozes out blue flames in the dark. Unlike the heritage attractions, this is one of a unique places to go for hiking and witness the incredible natural phenomena.

For the people who want to explore the marine life at Java Islands, Karimunjawa islands is one of the beautiful places to visit. There are around 27 different tropical islands located at the off the coast of Semarang. This is a great place to experience activities like snorkeling or diving. And apart from that you can also rent a boat and hop around the island.

How To Reach Java Island

Airways: The city of Jakarta is well connected with numerous international and domestic flights. Soekarno-Hatta International Airport & Halim Perdanakusuma Airport are the two main international airports in Jakarta. There are international flights also connecting other Javanese cities like Surabaya, Solo, Bandung, Yogyakarta and Semarang to the rest of the world.

Waterways: Jakarta connects to most ports of the nation through sea. There are frequent ferries running between Banyuwangi/Ketapang harbor in the East of Java & Gilimanuk in Bali and also between Merak port in Java & Bekauheni in South Sumatra.

Further Read: Beyond Bali: 10 Places To Visit In Indonesia For Your Honeymoon

The heart of Indonesia, Java Islands, is an incredible destination to witness the complex Indonesian culture. Though the culture, to a great extent, has been influenced by foreign interactions. As you explore the island’s secrets, you will realize that the place still retains its original indigenous flavour. Visit Java Islands for a great unwinding experience.

Q. What are the 5 main islands of Indonesia?

A. The 5 main islands of Indonesia are Sumatra, Java, Borneo, Sulawesi and New Guinea.

A. The Java island located at the southeast of Malaysia and Sumatra, is only the fourth largest island in Indonesia.

Q. What is Java island famous for?

A. Java island is the fourth largest island in Indonesia which actually covers more than half of the Indonesian population. Apart from that it is also the historic and geographic centre of Indonesia.