New Year In Moscow 2021: Spend Your New Beginnings At These 9 Best Places 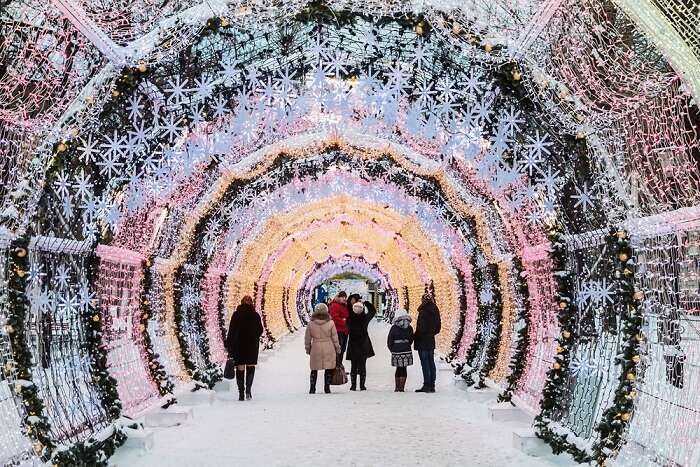 New Year celebration should be nothing like anyone has ever seen before, especially when it comes to soaking in the lovely vibes of the Russian city of Moscow. The dazzling crowds, Red Square and Cathedrals decorated with lights, and the amazing fireworks is the finest way to spend the holidays there. New Years is the time when the city of Moscow is covered in snow, and that’s why the place is often referred to as the ‘Winter Wonderland.’ People who are planning a trip to Moscow can be a part of the festive atmosphere and witness the magnificent landscape covered in the blanket of snow.

The cold winters are just an excuse to spend a holiday in Moscow full of thrills and adventures. What could be more perfect way to say goodbye to 2020 and welcome 2021 than to be a part of the grand celebration of New Year in Moscow 2021? New Year’s Eve is that time of the year where the whole city of Moscow lit up and become a visual treat for the tourists.

The New Year in Moscow would be incomplete if the people do not visit places such as Sergiyev Posad or Trinity Lavra of St. Sergius. Check out this list to know more!

Image Source
There is no way people can enjoy Moscow New Year’s Eve without the breathtaking fireworks. The best places to see it happening are- Red Square, Kremlin, and St. Basil’s Cathedral. Being the biggest holiday in Russia, people come from all over the world to witness the grand festivities. You can easily commute using public transport as the metro and buses will stay open until 3 a.m. After you have attended Moscow New Years Eve 2020, you should come to see the fireworks.

Image Source
It is considered as one of the fantastic tourist spots to spend Moscow New Year’s Eve. The park has the largest skating rink that consists of artificial ice. The rink is 20,510 square meters. The tourists can also see various music and light shows organized in the park from time to time. The park consists of several places designed in the modern European style. Tourists can also join the fun yoga and dance classes and take part in cultural events.

Image Source
Moscow New Year’s Eve 2021 is the best time to visit the Sokolniki Park. The place is known for its natural beauty and a relaxing atmosphere. During New Years, most of the regions in Moscow are usually covered in snow, and the tourists can go for skating or snowboarding. Although the place is a little far from the city center, the park has a special arrangement for uni-cycling as well as trampoline. The open-air cinema is where regular music concerts and cultural events are held.

The place is close to Yamskaya Street. There are many historical places located along the street. The tourists can enjoy the sight-seeing as there are many museums, theatres, and local restaurants. There are spots for photography such as memorial plaques depicting the art and culture of the 19th and 20th century. The place stays open till 2 a.m. There is a separate area for the concert on the intersection between Tverskaya Ulitsa and Manezh Square. As a special arrangement for New Year in Moscow 2021, special dance and firework shows are organized.

5. The Muzeon Park Of Arts

Image Source
To make Moscow New Year’s Eve 2021 unforgettable, the tourists can visit the open-air museum. It has more than 700 Soviet sculptures that are considered as masterpieces. The place is right across the street from Gorky Park. It is a great opportunity for tourists to buy paintings and take photographs of the glistening snow and famous Alpine rock gardens, beaches. Tourists can also attend music concerts. There are many other exciting spots for sight-seeing that includes the Moscow Central House of Artists and the famous Tretyakov Gallery. After the recent renovation of the museum, new statues were added to the place. Tourists can spend at least 1-2 hours in the warm and cozy heating lounge area with their loved ones.

Image Source
Now tourists can spend their New Year in Moscow 2021 at the world-famous Hermitage Garden. This romantic and quiet spot is at a walking distance from the Chekhovskaya. The place is stunning to take pictures with friends and family. The garden has a shadow theatre where live music performances are held every now and then. Tourists can spend quality time in the cafes and pavilions. People can even access free Wi-Fi as well. The Hermitage Garden features a heart-shaped ice rink with both natural and synthetic ice. The tourists can take skates on rent and enjoy the delicious Russian cuisine.

Image Source
The tourists eager to see the New Year party in Moscow can go this hotel located near the Kropotkinskaya metro station. The hotel organizes a six-course gala dinner for the hotel guests and tourists that includes Russian pancakes, caviar, and pies. There is also going to be a special arrangement of live band where people can dine and witness the beautiful fireworks over the Moscow River. The hotel also organizes dance programs and other cultural events to create a friendly environment for the guests.

Image Source
One of the best ways to spend the Moscow New Year’s Eve is by visiting the Patriarshy Bridge, near the Kropotkinskaya metro station. It is the right spot where he tourists can enjoy the fireworks and the wonderful sight of the Savior Cathedrals. There are many restaurants just minutes away from the bridge. Tourists can also make online reservations as New Year’s Eve is the busiest time of the year.

Suggested Read: Summer In Moscow: Soak In The Mesmerizing Landscapes Of This Stunning Russian City!

Image Source
The best places to attend the Moscow New years eve 2021 are as follows- Bar Belka, GQ Bar, and Kino. The tourists can book their tickets in advance to avoid waiting. Ritz- Carlton Moscow is the best option when it comes to hotels and accommodations. The hotel organizes grand New Year’s Eve parties every year that includes live music and dance shows, costume parties with some fine dining. The guests can relish the amazing fireworks happening live in the famous Red Square, Moscow.

One of the best places to spend New Year’s Eve in Moscow is Red Square. Located in the heart of the city, it is a UNESCO world heritage site offers a beautiful view and you can shop, eat and enjoy. Apart from that, you can enjoy fireworks. The place is usually crowded with cheerful people so it will fill you up with much excitement.

Here are some of the best reasons to celebrate the New Year in Moscow that will allure you like none other.

Tips For Partying In Moscow

With plenty of lit scenes in Moscow to party like there’s no tomorrow, here are a few steps that might guide you through the night of glamour & lots of fun to bring in the New year in Moscow 2021:

These are some of the best ways to celebrate New Year in Moscow. So, what are you waiting for? Plan your trip to Moscow to share the joy of new beginnings with your loved ones in this lovely winter paradise of Russia! Don’t forget to plan an itinerary in advance and make bookings well in advance to ensure a hassle-free holiday!

What are the Reasons to Spend New Year in Moscow?

What to do in the New Year in Moscow?

There is plenty of exciting things to do in Moscow on New Year’s eve that makes it worth visiting like:
1. Fireworks Show
2. Gorky Park
3. Sokolniki Park
4. Tverskaya Ulitsa
5. The Muzeon Park Of Arts
6. Hermitage Garden
7. Balchug Kempinski Hotel

What are some of the New Year’s traditions in Russia?

Here are some of the typical Russian traditions followed during the New Year’s Day in the nation:
-Russians celebrate New Year’s day on two dates viz. 1st of January as well as on 14th of January. (more about it below)
-This annual tradition includes firework display across the country, the most spectacular being at the Red Square in Moscow.
-During New Year’s at Russian households you’ll find zakuska tables with delicious assortments of different foods. (more about it below)
-Most Russians choose to spend the New Year’s Eve at home with family. The party often begins after 12AM.
-The most important tradition on the 1st of January in Russia is that of Ded Moroz (Grandfather Frost) which is the Russian version of Santa Claus. He brings along his granddaughter, Snegurochka (snow maiden) to distribute gifts to children.
-There is also the tradition of installing New Year’s Tree on the 31st of December.

What do Russians eat on New Years?

The famous Russian Salads are a staple during the New Year’s day in every Russian household, especially Olivier salad which includes potatoes, pickles, bologna, eggs, mayonnaise and more. The table is set with zakuska, appetizers or hors d’oeuvre such as caviar sandwiches or vegetables with sour cream dip with vodka as to wash them down.

What is Russian Old New Year?

How do you wish someone a happy new year in Russian?

“S Novim Godom!” is what you say to wish someone Happy New Year in Russian. You can use the same phrase during both the New Year’s dates to wish your Russian friends.

Summer In Moscow Indian Restaurants In Moscow Shopping In Moscow