8 Waterfalls In Mauritius To Witness The Prodigious Work Of Nature! 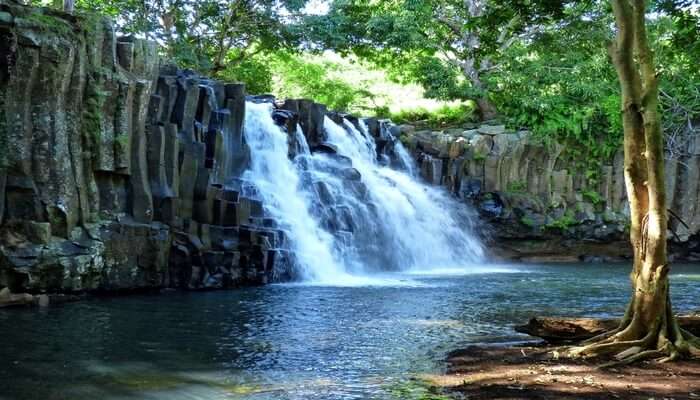 Mauritius is an island nation in the Indian Ocean, off the coast of East Africa. This tropical island is a vacation destination popular for its flawless beaches, lagoons, and reefs but the least people know are about the waterfalls in Mauritius. They are breathtaking and picturesque enough to help you up your Instagram game and catch every nature admirer’s attention. Don’t believe us? Witness it yourself!

Mauritius is a tropical island, the weather remains great throughout the year. But it gets crowded during the popular southern hemisphere summer period from December to March. Therefore, the best time to visit Mauritius is between April to November.

The iconic waterfall in Mauritius, the Alexandra Falls, standing 700 meters above the sea level is located in Black River Gorges National Park. This white waterfall is surrounded by nature’s lush greens and rare flora – fauna. The sight from the Alexandra Falls Viewpoint will make you bow before the wonders of nature. You can reach the waterfall via Plaine Champagne.

Must Read: Rodrigues Island: A Guide To A Hidden Paradise Off The Coast Of Mauritius

Tamarind Falls are located in the district of Black River. It is the Tamarind River that contributes water to the fall. This is one of the most captivating and adventure-packed waterfalls in Mauritius. The vicinity of this beautiful canyon of the island is filled with indigenous vegetation. You will also find exquisite bird species. Tamarind Falls consist of about 7 simultaneous waterfalls. This is why, it is also popularly known as ‘Sept Cascades’ or Seven Cascades.

The design of the Tamarind fall makes it the best waterfall in Mauritius for adventure activities. There are some challenging tracks also that require assistance from experienced guides. The large pond on the foot of the fall is easily accessible for a swim.

Things to do: Hiking, trekking, canyoning and swimming

Highlighting the historical era, slips down the Eureka Falls, situated near Eureka Mansion in Moka. Going down from the mansion, when you find yourself in a challenging path, know that the waterfall is not too far. Amidst the lush of palm and mango trees, sits this set of four charismatic waterfalls.

Once you have reached this heavenly spot, you will be surrounded by relaxing sounds from the rushing water and animals. In the Eureka river banks, nature lovers can explore the aquatic plants such as water lilies, ‘jacinte d’eau’, ‘bredes songes’ and marine life such as the ‘scampi, madame Céré’, tilapias, found in large quantities.

Things to do: Explore the authentic colonial Eureka House & gardens, shop for Mauritian souvenirs and try traditional Mauritian cuisine in the Old Kitchen.

Suggested Read: Head To Mauritius On A Budget Trip To Explore The Exotic Country In All Its Glory!

The Grand River South East is another major tourist attraction in Mauritius. Located in the South Eastern Coast of Mauritius, your journey to the waterfall will witness winding paths that lead to coastal villages. On the way, the scenic transition from turquoise blue to greenish water will put in an amaze. The thick vegetation and huge wall of basalt rocks dominate the area.

Things to do: Speed boat trip and catamaran cruising

Suggested Read: 12 Things To Do On Your Mauritius Honeymoon

In the outskirts of the Combo Forest lying in the Southernmost tip of Mauritius, flows Exil Waterfalls. Sitting on the Savanna River, Exil Canyon is surrounded by tropical forests. The canyon has moderate amount of water throughout the year and swells during the monsoons.
Exil Waterfall is an ideal spot for aquatic adventure activities. There are two main waterfalls: Leon and Cascade Cecile. The river leads to the hydroelectric power station.

Things to do: Try the adventure activities like abseiling, jumping and swimming across the ponds.

Suggested Read: Nightlife In Mauritius 2021: 10 Hotspots To Blend In The Vibe

The Rochester Falls, situated in the Savanna District is the widest waterfall in Mauritius. This 100 meters high fall is located in an isolated wild forested area. A distinctive feature of this fall is that it is has unique cliff formations which have transformed into rectangular blocks by the force of water over the past hundreds of years.

Chamarel Waterfall received its name from its location, the Chamarel Village, which was named after a captain who had settled here in 1786. It is known as the highest waterfalls of mauritius with a height of about 100 meters (almost the same height as the Statue of Liberty).

Three distinct streams sourcing from the River Saint Denis jumble to form the waterfall. The fall is studded with the oldest lava rocks of Mauritius, dating back to about 810 million years.

Suggested Read: 12 Exciting Water Sports In Mauritius For An Out-Of-The-World Experience In 2021

Just off the coast of Le Morne mountain, on the island’s Southwest lies what appears to be a vast subaquatic linn. Though this is counted under Mauritius waterfalls, this is not a waterfall in reality but an astonishing illusion of eyes. Sand and silt on the ocean floor run down in a way that it looks like the water is pouring down into an underwater waterfall. This is nothing but the flow of underwater currents that create this dramatic visual effect. This is only visible from a bird’s-eye view, so helicopters are specially arranged for underwater waterfall Mauritius tour.

It’s always a smart move to take safety precautions as you indulge in exploring nature. Follow these safety tips whenever you are at a waterfall:

Further Read: 10 Reasons Why You Should Spend Your Next Family Vacation In East Africa

Did you know that Mauritius was the only known habitat of Dodo? Just like many of us didn’t know that this beautiful island also had so many alluring waterfalls. Now you have a detailed list of waterfalls in Mauritius for your guidance. So plan a trip to Mauritius now coz it truly deserves to be your next vacay destination.

Q. Are there any underwater waterfalls in Mauritius?

A. Yes, there is one underwater waterfall in Mauritius.

Q. What makes a waterfall?

A. A river erodes soft rock more quickly than hard rock which leads to the formation of a waterfall.

Snowfall In Nainital: 6 Experiences To Savor In This Winter Wonderland

15 Captivating Honeymoon Destinations In North East India To Cover In 2021!