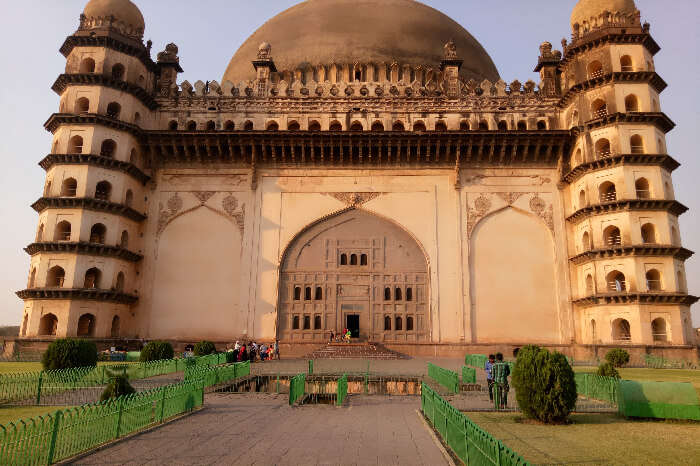 Built-in the 16th century, it almost took 20 years to complete the construction of Gol Gumbaz. It is a tomb of Adil Shah who started the construction right after he ascended the throne of Bijapur Sultanate. The tomb has 4 minars, each has 7 floors with staircases. One can see an overall view of Bijapur from these minars. Get ready to witness this charming mausoleum while exploring the impressive state of Karnataka. Before you leave for your encounter with the past, here is a guide that has all the information about Gol Gumbaz. This ravishing monument will leave you in awe and will surely make your trip memorable!

Gol Gumbaz is a tomb of Adil Shah in Bijapur, Karnataka. Its circular dome is said to be the second largest in the world after St.Peter’Basilica in Rome. The most peculiar thing is that the central dome stands without any pillar support. Mohammed Adil Shah, the 7th ruler of Adil Shahi Dynasty ordered to build this tomb before his death. The simple yet charming design of Gol Gumbaz is an example of architectural excellence of Bijapur.

Must Read: 12 Stunning Places To Visit In Summer In Karnataka For A Relaxing Retreat In 2020

The best time to visit Gol Gumbaz is between the months of October to March when the temperature ranges from 20 degrees C to 30 degrees C. You can even visit during the monsoons, however, rain might disrupt your travel plans. Summers are pretty hot and dry which may make your visit uncomfortable during summers.

History And Architecture Of Gol Gumbaz

Gol Gumbaz is a stunning structure that was built during 1626 – 1648 by Yaqut of Dabul. In Gol Gumbaz, the remains of Mohammed Adil Shah are kept and he ordered the construction of this epitome of architectural excellence. This mausoleum is the burial place of Mohammed Adil Shah, Taj Jahan Begum, and Aroos Bibi. The Sultan wanted that a tomb should be built where his remains will be kept and so the construction of this monument started in 1626 while he ruled Bijapur.

The architectural style of this impeccable structure is the Indo-Islamic and a lot of history enthusiasts visit Gol Gumbaz to marvel at its beauty and charm. This magnificent monument is a paragon of great architecture in the 17th century. With 144 feet diameter, Gol Gumbaz is one of the largest domes in India built in the 17th century. Eight intersecting arches support this majestic dome. As soon as you will enter the Gol Gumbaz, you will see a polygonal podium connected with steps on both sides. In the heart of this podium is the cenotaph of Mohammed Adil Shah. On the upper level is the Gol Gumbaz whispering gallery where you can take around. Even if you whisper in this gallery, your voice will be echoed and this is the highlight of this gallery.

Suggested Read:  14 Itineraries Including Best Honeymoon Places In And Around Karnataka In 2020!

Gol Gumbaz, the tomb of Adil Shah is circular in shape and is indeed one of the biggest domes in India. It is maintained by the Archaeological Survey of India. Here are some interesting facts and trivia about Gol Gumbaz you should know:

Suggested Read: 12 Hill Stations In Karnataka In 2020 To Rejuvenate Yourself

Places To Visit Near Gol Gumbaz

The city of Bijapur also known as Vijaypura is a cultural hub due to the influences from the various dynasties that have ruled this region. The place ranks among one of the popular places to visit in Karnataka. We present to you the list of best places you can visit near Gol Gombaz:

The Archaeological museum in Bijapur is an attractive structure built in the Adil Shahi architecture. This place is a perfect site for those who want to enhance their knowledge about the history of Bijapur. The collections in the gallery of the museum include stone inscriptions in Arabic, Kannada, Sanskrit and Persian languages, ancient coins, wooden carvings, carpets, miniature paintings and many other articles dated back to the time between 11th and 17th centuries.

Suggested Read: 15 Places To Visit In Coorg For A Mesmerizing Vacay In South India In 2020

Almatti dam is one of the key attractions in Bagalkot district in Karnataka. It is known for its height and beautiful surroundings. If you plan to go boating, it can be relished at this dam. The best time to visit is during monsoons and winters when the site of the dam is extremely pretty.

Suggested Read: Monsoon In Karnataka In 2020: Fabulous Experiences That Will Cast A Spell On You!

Narasimha temple is situated in Torvi, which is 5km from Bijapur. This temple is also known by the name of Narashoba temple. It is believed that at the site of the temple, Kumara Valmiki composed the famous Thoravi Ramayana in Kannada. Don’t miss out on this famous temple when you are in Bijapur.

Suggested Read: 20 Things To Do In Gokarna For Escaping The Monotony Of Life In 2020!

If you wish to enjoy a beautiful sunrise, you can plan your visit to Uppali Buruz monument in Bijapur. It is an 80ft high tower, spherical in shape with stone steps all around. Furthermore, it contains various guns, powder chambers, war material and water cisterns. The top of the tower is famous as it provides an aerial view of the city.

Suggested Read: 12 Best Places To Visit In Karnataka In March 2020 For A Fulfilling Vacay

One of the most recommended tourist spots is Malik-e-Maidan or “Lord of the Battlefield”. It is a huge cannon set up by Muhammad Adil Shah on the top of Sherzah Burj in Bijapur. The cannon is believed to be the largest warhead of the medieval era. It is said that the gunner had to take a dip in a water tank to protect his ears from the sound when the cannon was fired.

Suggested Read: 10 Festivals In Karnataka That Will Give You A Glimpse Into Its Vibrant Culture

The massive Gol Gumbaz tomb easily competes with India’s more famous mausoleum. Here are a few tips you should keep in mind if you plan on visiting the monument:

How To Reach Gol Gumbaz

Bijapur is associated with all transport routes. It is well connected to many cities, especially in South and West India. The place has its own bus stops and railway station. Once you have reached Bijapur, you can hire an auto, book a cab or look for the local buses to reach Gol Gumbaz. Another interesting way to reach the tomb is by a tonga. The airport is under construction and will be opened soon. Currently, Sambre airport in Belgaum is the closest one and located at about 164km from the city.

Further Read: This Private Island Homestay In Karnataka Is A Treasure & You Won’t Doubt It!

If you are fond of historical places, Gol Gumbaz will be worth visiting to satisfy your need for historical information. The architecture and the beauty of the tomb are enough to take you back to the 16th century. The handy guide is ready for you, all you need to do is book your holiday to Karnataka and get lost in the ancient world of the historic monument.

What is special in Gol Gumbaz?

Built-in the Deccan era, Gol Gumbaz is composed of a cube on each side, which is capped by a dome The most unique thing about Gol Gumbaz is that the central dome stands without any pillar support.

Why is Gol Gumbaz famous?

Gol Gumbaz is famous worldwide. It is the second-largest dome after St. Peter’s Basilica in Rome. This monument is also famous for its massive crowning.

What is the height of Gol Gumbaz?

The height of the Gol Gumbaz is 51 meters. It is 22 meters short of Taj Mahal, one of the seven wonders of India. The diameter of the dome measures up to 144 feet.

Which Bahmani ruler built the famous Gol Gumbaz at Bijapur?

Mohammad Adil Shah built the famous Gol Gumbaz. He was also the founder of Bijapur. His rule ended in 1686 when Mughal emperor Aurangzeb captured Bijapur. It is one of the best places to visit in Karnataka owing to its beauty and splendour. Yaqut of Dabul built it in the 1600s.

Which is the largest dome in India?

Gol Gumbaz, situated in Bijapur, Karnataka, is one of the largest domes in India.

Is Gol Gumbaz a mosque?

Yes, Gol Gumbaz is a mosque. The tomb of Adil Shah is one of the most phenomenal monuments of the Adil Shahi dynasty. The mosque stands as a testament to the power of the ruler in Southern India during his reign from 1626 to 1656.

How many towers are there in Gol Gumbaz?

There are 4 octagonal towers at each corner of Gol Gumbaz.

What is known as whispering gallery in India?