8 Best Places To Visit In Haifa For A Perfect Middle Eastern Trip! 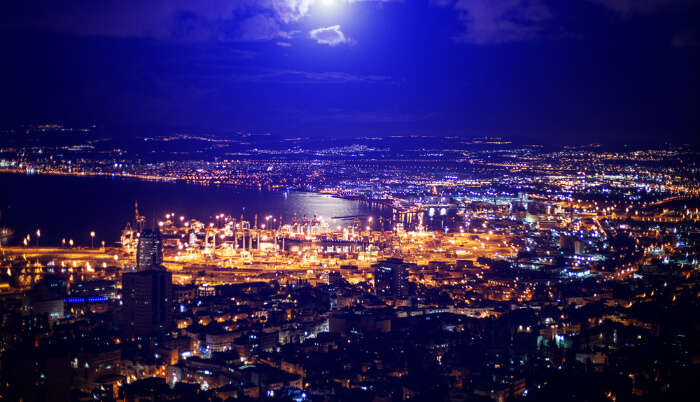 Also known as “Israel’s San Francisco”, Haifa is the third largest city of Israel. Gorgeously set on the slopes of Mount Carmel with the mesmerizing view of the Mediterranean Sea it is a hidden gem for amazing number of ancient sites of the country. Even though being a bustling port town, it is one of the most loved tourist destinations of Israel. Home to lovely Baha’i Gardens and Elijah’s cave, Haifa is a perfect example of the modern city life with a harmonious approach. There are a tremendous number of places to visit in Haifa which will stun you with their serene beauty.

8 Amazing Places To Visit In Haifa On Your Trip

Haifa is one of the most beautiful cities of Israel. Hidden gem for the ancient sites, you will find swo many amazing things in the city. Here is the list of 8 astonishing places to visit in haifa.

Image Source
If you are interested in history and cultures then head to the incredible Baha’i Shrine and Gardens, it is one of the best places to visit in Haifa, Israel. Baha’i Shrine, with its golden dome, is the city’s significant monument. It contains the tomb of Iranian Mirza Al Mohammed who called himself “Bab” or “gateway to God”. It one of the top places to visit in Haifa. It is declared as a World Heritage Site by UNESCO for its immense cultural and natural beauty. Enjoy a fun day exploring the beautiful gardens and the shrine, and get close to the city’s culture.

Must Read: 6 Haifa Hostels For You To Have A Comfortable Stay On Your Haifa Trip

Image Source
Elijah’s Cave is just opposite to the Stella Maris Carmelite Monastery and is one of the important pilgrimage sites in Haifa. Until 1948, It was a mosque and it is believed that Prophet Elijah hid here after killing the priests of Ba’al. It is a significant site for Muslims, Christians and Jews who all believe in Elijah in high regard. You will experience a peaceful time here. It is recommended to dress modestly to respect the pilgrims who are visiting the site.

Image Source
Haifa has two popular beaches where you can indulge in thrilling water activities or even spend a laid-back day soaking in the sun by the beach. Bat Galim Beach is the most known beach of Haifa. A paradise for sports enthusiasts, you can enjoy all kinds of water activities here, From kiteboarding to windsurfing, snorkeling to jetskiing, and much more. It ranks as the best place to visit in Haifa. After a thrill activity satisfy your hunger with delectable Israel cuisine, as there are many cafes and restaurants by the beach where you will find amazing dishes to satisfy your cravings.

Suggested Read: 7 Restaurants In Haifa That Will Make You Visit There Again And Again

Image Source
If you want to take to take a break from sightseeing and enjoy a relaxing time in the lush greenery then head to Ursula Malbin Sculpture Park. Filled with gorgeous bronze statues this park is a favourite spot for locals to come and take a stroll with their friends and family. If you are travelling with children than it is a best place to let them play and enjoy with their friends. Located in the center of the city is gives you a break from the hustle bustle of the streets and traffic on the roads.

Suggested Read: 10 Incredible Things To Do In Haifa That Will Let You Have An Intriguing Vacay

Image Source
If you like to explore the ancient history of the city to know more about the roots of the city than make sure to visit Caesarea while vacaying in Haifa. Located between Haifa and Tel Aviv, Caesarea is home to country’s most magnificent ancient sites. You will find many antique discoveries here one of them is the famous figure of Artemis which is now preserved in the Israel Museum in Jerusalem. Take a visit here and explore the ancient sites of Israel with your loved ones.

Image Source
If you are a trekk lover, then pack your belongings and get ready for an adventurous trek on the slopes of Mount Carmel, it makes an excellent day trip from the city. The main historic attraction of here is the famous Carmelite Monastery of St. Elijah, where it is believed that Elijah set up an altar during the conflict with the priests of Baal. It is one of the famous places to see in Haifa. After a thrilling trek, explore the beautiful Ein Hod, which is an artists’ village comprising colourful galleries.

Image Source
One of the most significant pilgrimages in Haifa, Stella Maris Carmelite Monastery is known for its lush frescoes portraying St. Elijah. Rebuilt in 1836, after being destroyed by the Napoleon and Ottoman battle, is now one of the most important pilgrims for local people of Israel. It is a great place to learn about the history of the country. An interesting museum is in a room adjoining the monastery entrance that you can explore and learn more about the monastery. After exploring the museum you can head to the Elijah’s cave, which is nearby the Monastery.

Suggested Read: 10 Places For Scuba Diving In Israel To Satiate Your Adventure-Lust

Image Source
Haifa is not just famous for incredible sites that take you on a trip to the past, but is is one of the best cities in the country serving the most authentic Israeli cuisine, which is undoubtedly delectable. Talking about the Israeli cuisine, Falafel is everyone’s favourite and is something which you definitely cannot miss while in Haifa. Falafel HaZkenim is the oldest restaurant in the town serving the most delicious Falafel. You will have to wait in long queues as there are thousands of people visiting this restaurant for the best falafel of the town. The taste of pita wrapped around the crunchy falafel with a small slick of tahina (sesame paste) will surely leave you speechless. Make sure to visit this restaurant as it is one of the famous places to go out in Haifa.
Address: Wadi St 18, Haifa, Israel

Further Read: 10 Best Places To Visit In Israel In 2021 For An Extended Tour Of The Holy Land

Haifa is the crown jewel of Israel which will stun you with its beauty and rich history. With so much to offer there are many places to visit in Haifa, from majestic ancient monuments to famous restaurants this city is a wonderful destination for spending a fun-filled vacation with your loved ones. Plan a trip to Israel and make the most of your holidays!