Snowfall In Shimla: Enjoy The Winter Chill In The Summer Capital Of British India This 2021! 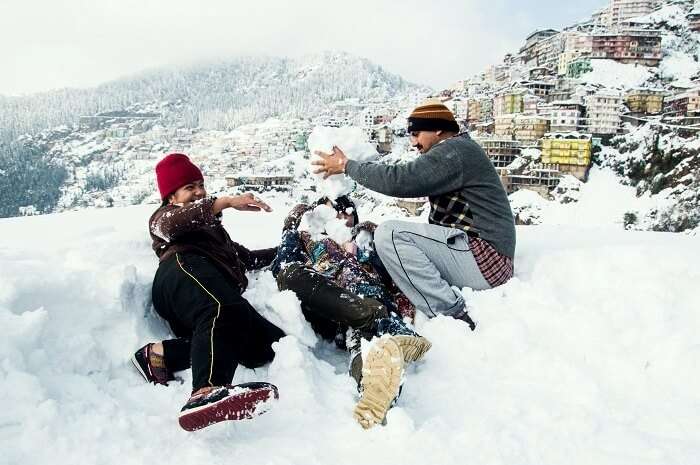 Breathtaking landscapes, colossal mountains, bustling markets, upscale hotels and restaurants, and pleasant weather all year round. Shimla has everything that makes it a popular retreat to beat the scorching summers of North India. With its peak tourist season during the summers, Shimla also witnesses a huge tourist footfall during the winter. This is because it is one of the few places in India which witnesses a subsequent amount of snowfall. So, satisfy your craze for a white winter as you embark on a journey to witness snowfall in Shimla.

Here’s a guide to help you explore the best of the city during the winter season.

While Mid-December to January is the time when the probability of witnessing snowfall in Shimla is quite high, the snowfall season in Shimla may arrive early which adds more joy and beauty to the whole idea of your vacation. If not anything else, this will surely encourage tourists from all parts of the country to flock to this hill station and spectate the beauty of the town, which is now blanketed by thick layers of snow.

Must Read: Camping In Shimla: How About Some Adventure Instilled Romance?

Average Temperature During Snowfall In Shimla

The temperature varies between 0°C to 10°C during snowfall in Shimla. The average temperature is on a higher side at the time of snowfall but drops sharply when it stops. This is because of the freezing winds that blow throughout the region.

Tourists can enjoy the chilly winters at popular spots in and around Shimla such as the Mall Road, Kufri, Scandal Point, Jakhoo Peak, and more such places.

Being a popular tourist hotspot of the country, Shimla boasts of numerous tourist attractions which need a minimum of 3 days and 2 nights to be explored. If you are planning a trip to witness snowfall in Shimla then a weekend would be sufficient to traverse through this picturesque hill town. Travelers can also book a 2 nights 3 days Shimla Tour Package which would help them to explore the town in a planned, and organised manner.

Must-Have Experiences During Snowfall In Shimla

Here are some of the experiences that one should not miss during a snowfall in Shimla. Have a look at the best ones!

Studded with numerous shops and eateries, The Mall Road is definitely one of the best places to visit during snowfall season in Shimla. Indulge in a heart-filling shopping experience as you walk past the snow-covered street market of the town. Tourists can also grab some lip-smacking snacks from various eating joints lined across the road.

Suggested Read: Camping In Shimla: How About Some Adventure Instilled Romance?

2. Kufri: Embark On A Sightseeing Tour

Also known as the ‘Snow Resort’, the picturesque hill station of Kufri is the best place to experience snowfall in Shimla in December. It is one of the most famous places to visit near Shimla where travelers can explore popular sights like the Himalayan National Park, Kufri Fun World, and Nagsons Amusement Park.

Suggested Read: Kufri In December: Your Little Guide To A Winter Trip

One of the most arousing aspect of snowfall in Shimla is that it opens a window for numerous winter sports for tourists. Indulge in these thrilling activities to quench your thirst for adventure during your trip to Shimla. Ice Skating, skiing, and sledging are some of the best adventure sports that travelers can indulge in.

4. Jakhoo Peak: Climb Up To The Highest Peak Of The City

Situated at an altitude of 8,000 feet, Jakhoo Peak is the highest point of Shimla. Boasting of tall Alpine trees, a colourful Temple, and a colossal statue of Lord Hanuman, this peak is a popular tourist attraction, and one of the best places to witness heavy snowfall in Shimla.

Suggested Read: Honeymoon In Shimla: Guide To A Romantic Escape For Newlywed Couples

If you are looking for peace and tranquility during your trip to Shimla, then head to the serene town of Mashobra. Situated at an altitude of 7,700 feet, it is one of the best snowfall places in Shimla where travelers can rest in the arms of nature, away from the hustle and bustle of the city life.

6. Green Valley: Indulge In An Unending Affair With Nature

Green Valley is one of the most famous tourist spots in Shimla that has also been used as a shooting spot in various bollywood movies because of its lush green natural bounties. Visit this place during snowfall period in Shimla to indulge in an eternal affair with nature, and click pictures with a breathtaking backdrop of the extensive greenery of the valley.

Situated approximately 25 kilometers away from Shima, the mesmerizing hill town of Naldehra is one of the best places to witness snowfall in Shimla. This places is home to the oldest 9 hole golf course in India and is also known for its luxurious resorts, and picnic spots where one can spend quality time with their families.

Suggested Read: 5 Resorts In Shimla For A Relaxing Retreat

Places To Stay During Snowfall In Shimla

The Cecil, Shimla, is a 5-star property of the Oberoi chain of hotels that dates back from the British era. Boasting of colonial architecture, luxurious rooms, and opulent decors, Cecil is one of the best places to stay during snowfall in Shimla.

Overlooking the snow-clad Himalayan mountains, Radisson Hotel, Shimla, is one of the best properties to stay during snowfall in Shimla. It is the best 4-star hotel that provides all sorts of luxuries such as a gymnasium, outdoor pool, spa center, fine dining restaurant, and an upmarket bar.

Suggested Read: 10 Most Amazing Things To Do In Shimla

Planning a trip to witness snowfall in Shimla? Book your stay at Honeymoon Inn to cherish every moment of your trip in their cozy accommodations. It is one of the best hotels in Shimla that provides luxurious rooms along with top quality amenities at budget prices to make your trip even more memorable.

Places To Eat At During Snowfall In Shimla

Listed below are some amazing places to eat at on a trip to Shimla. Have a look!

Indulge in a top-notch fine dining experience during snowfall in Shimla at Eighteen71 Cookhouse And Bar. This upmarket restaurant is known for its dazzling ambiance and extensive multi-cuisine menu. Savor authentic Indian food along with various other cuisines at this restaurant during your trip to Shimla.

Looking for upmarket cafes during snowfall in Shimla? Head to Cafe Sol in Hotel Combermere. Providing enthralling views of the valley from their open-air sitting area, it is one of the best places which serves lip-smacking Indian, Mughlai, Chinese, Thai and Continental cuisines.

Located inside the Cecil Hotel, The Restaurant is one of the best places to eat during snowfall in Shimla. This restaurant boasts of an opulent ambience, and a scrumptious 4-course menu that includes culinary delights from local Himachali, pan-Indian and International cuisines.

While planning a trip during snowfall season in Shimla, one has to keep in mind, the acute weather conditions of the place. So, here’s a list of the essential items that one must carry while visiting Shimla during snowfall:

Further Read: 10 Most Amazing Things To Do In Shimla

Dreaming of a vacation in the mesmerising valley of Shimla? Book a customisable Himachal tour with TravelTriangle to witness snowfall in Shimla, and explore its nearby tourist destinations.

Q. Which month does it snow in Shimla?

A. It generally snows during late December or January in Shimla.

Q. Which month is best for Shimla and Manali?

A. If watching snowfall in Shimla is not the aim, one can visit Shimla and Manali during summertime too, during the months of April and May.

Q. Is it safe to travel to Shimla?

A. Yes, Shimla is one of the safest places for your vacation.

Q. Is Shimla worth visiting?

Q. What can I buy in Shimla?

A. There are a plethora of things that you can buy in Shimla like handicrafts, wood articles, woolens, and jewelry.

14 Best Places To Visit In South India In October 2021 For A Pre-Winter Vacation!

16 Winter Honeymoon Destinations In India In 2021

9 Places To Visit In Mashobra: Winsome Retreats In An Unspoilt Paradise

16 Homestays In Shimla That Offer A Comfy Stay In The Hills In 2021!