10 Airports In Costa Rica To Start Off Your Vacation The Right Away! 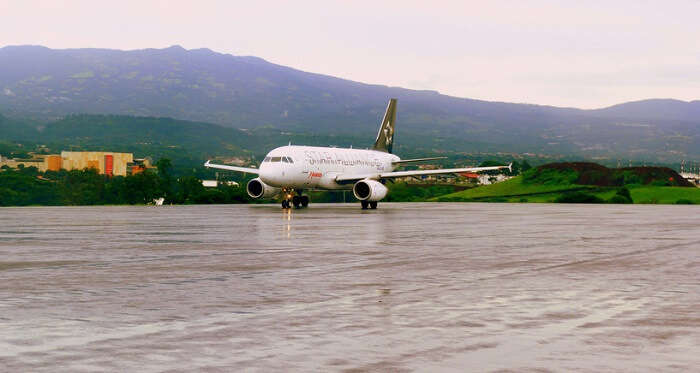 Airports or air transportation is a very important aspect of the economic development of any Nation. Well, Costa Rica has all the three modes of transportation in a well-functioned manner. There are inter American highways as well as coastal waterways which provide a proper mode of transportation, but most of the travelers and abroad tourists prefer to use the air transportation to commute from one place to another in Costa Rica.
Costa Rica has a wide network of airports which include some of the major international airports as well as domestic airports for the proper commutation of passengers from one point to others.

So take a look at some of the best airports in Costa Rica , both domestic as well as international in Costa Rica.

Must Read: 12 Best Things To Do In Costa Rica That Will Get Your Pulse Racing At Once!

Limón International Airport is one of the four international airports in Costa Rica. After being opened as a domestic airport for the commutation of domestic passengers, the airport was closed due to some abnormalities in the country. However, after two decades of closure, the Government of Costa Rica decided to reopen the airport and branded it as an international airport on 1st July 2006. It is one of the most important Costa Rica airports and has been serving as the primary airport for tourists trying to visit the Caribbean islands and Central American Nations.

Juan Santamaría International Airport is again one of the four international airports in Costa Rica. Located near the province of San Jose in Costa Rica, it is one of the most important airports of the country and serves as a primary connection from San Jose to other parts of the world. This Airport was named after the national hero of Costa Rica, Juan Santamaria. He was a courageous drummer in mid-1800s who had the guts to defend his nation against an American intruder named William Walker.

Suggested Read: 7 Places To Visit In Costa Rica To Experience The Best Of Nature & Culture

TobíasBolaños International Airport is yet another of the four most important international airports of Costa Rica. Apart from this, it should also be noticed that it is the secondary airport, which serves the city of San Jose after Juan Santamaria International Airport. This airport was named in remembrance of the first pilot who graduated from Costa Rica named Tobias Balaños Palma. He founded the base of the aviation industry of Costa Rica and hence, is considered a pioneer by many.
It is located near the downtown of San Jose. Several companies provide the day to day services for the passengers and normal commutation of the travelers in this airport.

The Carrillo Airport is a domestic airport, which serves the village of Puerto Carrillo in Guanacaste Costa Rica. The air terminal and town are 5 kilometers (3.1 mi) east of Sámara town. The airplane terminal comprises of a grass runway and a secure haven that is often used to gauge gear before loading up. There are no pleasantries close-by.

Coto 47 Airport is an air terminal that serves Coto 47, Costa Rica. It is in Puntarenas region 16 kilometers (9.9 mi) from the Panama outskirt. The Coto 47 non-directional reference point is situated on the field. The air terminal is available to areas, including Pavones, Sabalos, Neily, and Playa Zancudo. A planned transport, the Finca 40 leaves for Neily every day, and there are additionally numerous taxis and cabs accessible for reaching different areas

Suggested Read: Honeymoon In Costa Rica: Your Gateway To Paradise!

Golfito Airport is an air terminal that serves Golfito, a city in Puntarenas Province, Costa Rica. Golfito Airport is an essential residential air terminal, the eighth-busiest in the nation by traveler movement. The airplane terminal is claimed and overseen by the nation’s Directorate General of Civil Aviation.
Location: Puntarenas Province, Golfito, Costa Rica

Costa Rica is an important hub for tourism in Central America and hence, it is very important for it to have an efficient network of airports and air transportation. The aviation authority of Costa Rica is more than capable of maintaining a proper air transportation network in the country. It has achieved some of the finest achievements in the recent times to take Costa Rica airports map on a global level. So, now you know what to do! Plan a holiday to Costa Rica and enjoy your flight at these airports!

How many international airports are there in Costa-Rica and which is the largest amongst them?

Is there a direct flight to Costa-Rica from Delhi?

There are no direct flights available between Delhi and Costa-Rica, however, a number of connecting flights from Delhi to Costa-Rica are available like British Airways, Lufthansa, Air Canada etc which operate on this route with 1 or more stops in between.

How much time does it take to reach Costa-Rica from Delhi?

Which US airlines fly to Costa-Rica?

Some of the famous US airlines that fly to Costa-Rica are:
1. US Airways
2. American Airlines
3. JetBlue
4. Alaska Air
5. Spirit

Which are the cheapest and the most expensive months to fly to Costa-Rica?

September is considered the cheapest month to fly to Costa-Rica from India and months from June to August are considered to be the most expensive ones.

How much does it cost to fly to Costa-Rica from Delhi?

On an average it costs INR 95,000 to INR 1 lakh to fly to Costa-Rica from Delhi for a round trip. You can book three months in advance to get some discounts, if any.