Greece In August: A Helpful And Handy Guide For A Hassle-Free Planning 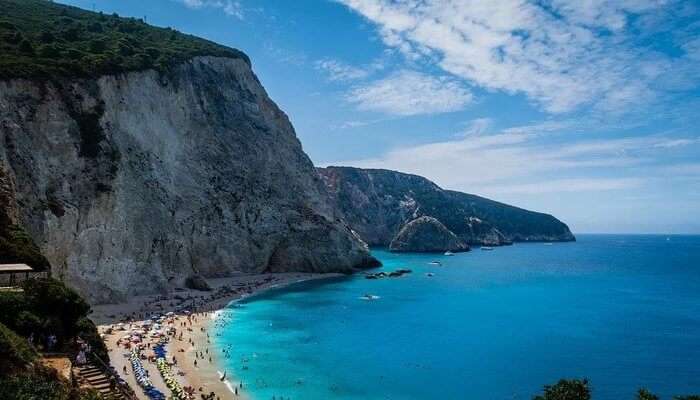 Greece, home to ancient remnants of one of the first empires of human civilization, is known for its long stretches of sandy beaches and postcard-perfect ocean vistas, surrounded by turquoise blue waters as far as the eyes can see. The vacation capital of Europe, Greece has a lot to offer to its tourists. The month of August falls straight in the middle of the peak season of Greece and is perhaps one of the best times to visit the country.

During your trip to Greece in August, you can expect to have a gala time. The locals prepare for the season by opening starting ferry routes, opening the doors to their most important monuments, and setting up beach parties like you have never seen before. However, with scores of tourists coming to the country in August, it is better to learn a bit more about the destination in order to ensure your experience is not compromised.

Weather In August In Greece

August is a summer month in Greece and is also one of the driest months of the year. Places that do get rainfall only receive about 20mm of rain on just four days of the month. However, the temperatures can get pretty warm on some days. The average temperatures range between 34-degree celsius and 19-degree celsius. With that said, the ocean water temperatures are also on the warmer side, making it perfect for a dip.

Let’s look at all the other reasons you must visit Greece in August:

Must Read: Visit These 7 Churches In Greece To Marvel At Their Beautiful Architecture

Reasons To Visit Greece In August

The foremost reason to visit Greece in August is of course, the amazing weather. While it is considered a bit on the warmer side by some, the Greek people sure know how to cool down with sunset coloured cocktails, sundowner parties on the beach and of course, by taking a dip in the perfectly temperate waters surrounding the country’s islands.

Another reason to visit Greece in August is that the locals consider the summer months the peak of tourism season and thus, the country collectively puts it best foot forward for the incoming visitors. This means all the best attractions and hotels in the country are open for business and extremely busy.

Let’s learn a bit more about the Greek festivals that you must attend on your upcoming visit in August:

Suggested Read: Be A Part Of These Great Greek Festivals On Your Next Vacation To Greece!

The Olympus Festival is the biggest cultural festival of Northern Greece. The festival is celebrated with cultural, musical, and dramatic performances that people come to witness from across the country and the globe. The festival venues range from the 2400 year old Greek Theatre in Dion to the Byzantine Era Castle of Platamonas. The festival is a 48 year old tradition and since 2010, the festival has been cooperating with a neighbouring country of honour. With this, the Greeks strive to strengthen their strategic ties with these countries, and the attendees of the festival get to experience two vibrant and different cultures in the same festival.

When: July to August
Where: Across Greece
How Much: No Entry Fee

Suggested Read: National Parks In Greece: 9 Places To Experience The Best Of Greek Beauty And Wilderness

A music festival dedicated to celebrating classical music, the Molyvos International Music Festival is one of its kind in the area. The festival features performances by some of the biggest names in the classical music industry, alongside some of the most loved rising stars in the same space. The ten day festival is hosted in the city of Molyvos. The primary venue, the Byzantine castle of Molyvos, is just one of the many historically and culturally rich experiences associated with the festival.

When: 6th to 17th August
Where: Molyvos Castle
How Much: To Be Announced

Suggested Read: Visit Greece In March For A Vibrant, And Colourful Spring Vacation

The Pulsar Arts Festival of Samothrace is a great celebration of the local and international arts. The festival attracts artists that appreciators of art from across the world and is one of the most recognized art festivals in the world. The Pulsar Festival also features entertaining performances from a host of world renowned artists.

When: 7th to 9th August (Dates may vary)
Where: Samothrace
How Much: To Be Announced

Places To Visit In Greece In August

Listed below are some of the best places you can explore when visiting Greece in August. Check them out!

THe capital city of Greece is also the most important city in the country, especially in terms of historical importance and tourist interest. The city is rich with relics of a civilisation that gave birth to democracy and shaped the course of history, the effects of which, are still apparent in the modern society.

The city is an absolute delight for history buffs as it boasts a stupendous collection of historical sites like the Acropolis and the Agora, along with information rich and beautiful museums like the National Archeological Museum.

Suggested Read: 10 Castles In Greece That Testify The Country’s Glorious Past

Turquoise waters, surreal ocean vistas, and a collection of some of the most beautiful beaches in the Aegean Sea region, Milos Island looks like it has come straight out of a Greek mythological tale. However, the island is often overlooked in many itineraries that go around the Greek Islands.

This makes it a perfect opportunity to avoid the swarms of crowds roaming the country in the summer months, while spending some lazy time at the beach. The island is also home to some of the top accommodation options and restaurants in the region, making it an ideal destination for a typical beach holiday.

Suggested Read: Visit Greece In October For A Relaxing Vacation In The Greek Setting In 2021!

THe biggest of the Greek Islands, Crete is also one of the most vibrant islands in the country. Home to peaceful but thriving cities like Heraklion, the island is divided into two parts. The northern part of the island boasts a collection of developed cities that feature some breathtaking architecture and a collection of historical sides.

The southern part of the island, however, is far less developed, and is an absolute treat for nature and beach lovers. There is so much to see on the island of Crete that simply exploring the island can take up to 4-5 days, so make your itinerary around the islands accordingly. Crete is easily one of the best places to visit in Greece in August.

Another fantastic island, just like Crete, Corfu is home to some picturesque beaches and cities However, unlike most islands in the region, Corfu is filled to the brim with greenery, blessing it with some of the most unique scenery in the area.

The island is of course, home to a rich history preserved in its Old Town, which is one of the most picturesque towns in the Mediterranian Area.

Suggested Read: How To Apply For A Greece Visa For Indians: Detailed Information For 2021

If you have ever been on Instagram, then you probably have seen the white buildings of Santorini. Home to fantastic and unique architecture and some of the best views of Greece, Santorini houses some of the most recognised structures of Greece.

Suggested Read: Water Sports In Greece: These 9 Places Will Unleash The Waterbaby In You In 2021

Things To Do In Greece In August

Listed below are some of the best activities you can try during your trip to Greece in August. Do add these activities in your itinerary and make the most of your vacation here!

1. Walk Through The Acropolis

THe place where the concept of democracy was formulated, the Acropolis is one of the most important historical sites in all of Greece. Walking around the ruins of a once great court, one can’t help but imagine how the ancestors of Greeks must have led their lives.

Suggested Read: 10 Best Fascinating Things To Do In Mykonos For A Dazzling Vacay In Greece

Once regarded as the home of the Gods like Zeus and Aphrodite, Mount Olympus is not just blessed with a rich history, but with stupendous views of Athens.

However, except for the views and the history, the experience of climbing the mountain where Gods were believed to live is one of its kind on the whole planet, and should definitely not be missed during a trip to Greece.

Suggested Read: Greece In December 2020: A Guide To Explore The Gem Of Aegean Sea During Winters!

3. Soak The Sunset Vibes In Santorini

The city of Santorini witnesses some of the most beautiful summer sunsets in the world. While the accommodation in the city can be a bit on the pricey side of things, the views and the experience is well worth the effort. Not to forget, if you can’t afford to stay at an ocean-facing property, you can still enjoy a hearty seafood meal overlooking the fantastic views that have made Santorini one of the most famed cities of Greece.

Further Read: Top 22 Places To Visit In Greece In 2021 For A Perfect Mediterranean Vacation

August is one of the best times to have a vacation in Greece. With fantastic weather on your side, and presence of some of the awe-striking monuments and sights, visiting Greece in August will turn out to be a fantastic idea. With that said, in order to make the most of your experience, you need to plan your trip thoroughly and this is when the guide provided above will come in handy.

Q. Does a Greek Visa grant access to the rest of Europe?

A. Yes. Greece is part of the Schengen countries and you can visit the rest of Europe on a Greek Visa.

Q. How do I get around within Greece?

A. Greece boasts a strong network of public transport powered by trains and buses, which offer a cost effective and efficient solution to get around the country. Alternatively, renting a car is also a great idea to explore Greece at your own pace.

Q. Is there an entry fee to see the Acropolis?

A. Yes. The entry fee is 20 Euros for International tourists.

Q. Do I need a guide to hike Mount Olympus?

A. By practicing a little bit of caution, you can eliminate the need of hiring a guide for the hike to Mount Olympus. However, if you are looking for a comprehensive experience, it is worth noting that the mountain holds great historical importance, something that can be best described only by a local travel guide.

Q. How do I get around between Greek Islands?

A. There are a number of ferries operating on the routes between Greek Islands.

An All-In-One Post-Covid Travel Guide To Russia: Your Pocket Guide To Explore The Grand Paradise Safely

Bali In January: A Guide For Those Planning A Trip In The Beginning Of 2021

Himachal Pradesh In March 2021: A Guide For Those Visiting This Splendid Destination In Spring