15 Tourist Places Near Jodhpur That Are Worth Extending Your Vacation In Rajasthan In 2020! 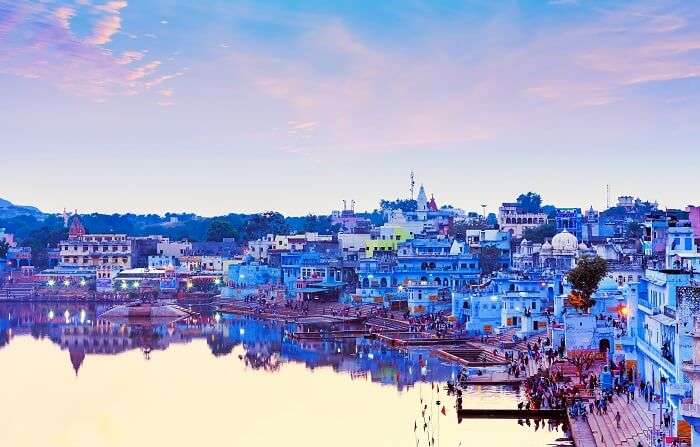 From the grandeur of Mehrangarh Fort to the peaceful environs of Balsamand Lake, Jodhpur epitomises the art, culture, and the beauty of nature through its architectural marvels and attractions. And the Golden City shares this striking beauty with famous as well as offbeat tourist places near Jodhpur that are full of natural charm to the core.

So if you’ve been planning to extend your vacation to this princely state of Rajasthan, then this list of mesmerizing places to visit near Jodhpur is what you exactly need!

Tourist Places Near Jodhpur Within 200 Kms

Located within the range of 200 odd kilometers, these are the offbeat and lesser known places to visit near Jodhpur that make for a great stay in Rajasthan.

Much famed for its cultural heritage and age-old settlements, Khimsar is one of the lesser-known tourist places around Jodhpur that is located near the village of Khinwsar. Yet to be explored to its fullest potential by the travelers, Khimsar makes for a great vacation away from the city clutter.

Suggested Read: 10 Hidden Treasures Of Rajasthan That Need To Be Visited Right Away!

Owing much to its location which lies between the famous cities of Bikaner and Jodhpur, Nagaur is yet another one of the tourist places near Jodhpur Rajasthan that is gaining much popularity amidst the travelers. Once dominated by the Rajputs, Nagaur is one place that has deep-rooted cultural and historical significance.

Suggested Read: Shopping In Jodhpur: From Places To Products Here Is The Best Of 2020

Reckoned to be one of the best places in Rajasthan for bird watching, Khichan or Kheechan is located in the Phalodi region of the Jodhpur district. Home to a whopping 15,000 and more Demoiselle Cranes, Khichan also serves as one of the most scenic picnic spots near Jodhpur.

Suggested Read: Top 6 Places To Visit In Jodhpur That You Just Can’t Afford To Miss In 2019

On your way from Jodhpur to Udaipur, lies this quaint little town of Ranakpur which is very popular for its Jain temples. Other than the architectural marvels, temples, and unspoilt environs that makes Ranakpur one of the unspoilt tourist places near Jodhpur, the town is also famous for the astonishing number of monkeys that reside here.

Suggested Read: Deeg Palace In Rajasthan: An Escape To The Royal Past

The city of Pokhran goes down in the history to have offered its ground for the testing the detonation of country’s first-ever nuclear weapon. Located at the core of the Thar Desert, Pokhran is undoubtedly one of the remotest and historically rich places to visit near Jodhpur.

Suggested Read: 12 Things To Do In Jodhpur That Should Instantly Get Added To Your Travel Bucket List

Adding the much needed grace to the Rajsamand district of Rajasthan, Kumbhalgarh is a fortress of the Mewar Kingdom which stands tall on the western ranges of the famous Aravali Hills. With an astonishing wall that measures upto a length of 38 kilometers, the World Heritage Site of Kumbhalgarh Fort happens to be a must-visit attraction in this city.

Suggested Read: 15 Best Resorts In Jodhpur For A Taste Of Luxury & Rajasthani Heritage

Tourist Places Near Jodhpur Within 300 Kms

Located within the range of 300 odd kilometers, these are the famous places to see near Jodhpur that make for a lavish vacation in the heart of Rajasthan.

Though the district of Barmer happens to be the third largest area in the state of Rajasthan, it yet remains one of the lesser-known tourist places near Jodhpur. Formerly known as Mallani, the great ruler of Bahada Rao established this city which is famous for its ancient temples.

From the sacred Ajmer Sharif Dargah to the quixotic Ana Sagar Lake, Ajmer is a place that feels like magic to the bits. Surrounded by the majestic Aravali Hills, make sure you do not miss out on the Taragarh Fort when in the beautiful city of Ajmer.

Reckoned across the country to be the only place where the rats are worshipped as the Gods, Deshnok is one of the must visit tourist places near Jodhpur. Located in the close proximity to the border of Pakistan, make sure you visit the famous Karni Mata Temple which is believed to be about 600 years old.

Founded by the prince of Jodhpur – Prince Kishan Singh, the princely state of Kishangarh was established by the royalty themselves. Famous for its royal palaces and high-rising forts, Kishangarh serves as one of the offbeat places to visit near Jodhpur.

Encircled by the Thar Desert on all sides, Bikaner is one of the most cultural tourist places near Jodhpur and a city that has its roots deep in its traditions. Offering many popular sites like that of Junagarh Fort, Lalgarh Palace, and Prachina Museum, Bikaner serves as a perfect destination for a laid-back vacation.

Reckoned to be one of the most romantic honeymoon places in Rajasthan, Udaipur oozes royalty, luxury, and charm like no other city in the state of Rajasthan. Surrounded by lakes on all sides, Udaipur has everything that makes a luxury vacation, a total hit amongst the travelers.

Popular to be the only hilly escapade in a land which is dominated by the desert, Mount Abu is one of the refreshing tourist places near Jodhpur. Located in the Sirohi district, a vacation in Mount Abu is all about relaxing amidst the mountains while relishing the scenic views of the natural beauty around.

Of forts, palaces, museums, and ancient ruins, Jaisalmer is the gateway to the Great Thar Desert. Located in the heart of Rajasthan, Jaisalmer is much famed as the “Golden City” due to its highlighting and intricate architectural style done in yellow sandstone. While Jaisalmer Fort adds the knightly stature to the city, the Maharaja Palace and the Jain temples take you through its deep-rooted history.

Feel like updating your bucket list? Then what’s stopping you? Awaken your inner travel bug and get going to explore these fascinating tourist places near Jodhpur. Just book a trip to Rajasthan, and let TravelTriangle plan a hassle-free holiday for you!

17 Places To Visit In Thekkady For An Exuberant Getaway In 2020!