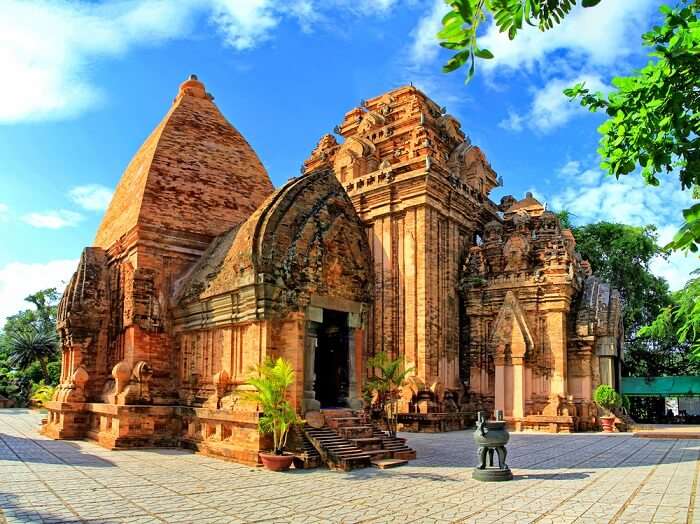 Temples are one of the main attractions in Vietnam and tourists come here to visit the beautiful structures and intricate designs of these temples in this country. Although Vietnam is predominantly a Buddhist country it still has the touch of other religions and that is displayed by the Hindu temples in Vietnam.

Other than Buddhism here you will find Caodaism which is a mix of several religions, which are Judaism, Hinduism, Islam, Taoism and many more. There is a huge list of best Hindu temples in Vietnam and most of them do not have an entry fee, but you have to wear proper dresses and have to enter the prayer halls in bare feet.

Here is a list of 10 best temples in Vietnam you must visit while holidaying there. Take a look!

This is one of the famous Hindu temples in Vietnam and it was built by Tamil merchants in the 19th century and they came here for the purpose of trades. This temple is situated in the Ho Chi Min city and is dedicated to the Hindu goddess Mariamman. The temple reflects the south Indian culture and their craftsmanship and is very popular among Hindus of India. Foreign visitors find this temple a very unique one just for its beautiful stonework and you will find the statues of all Hindu gods and goddesses here. The temple has a very peaceful atmosphere and a perfect one for meditation. Also being very close to the well-known market Thanh, you can shop there as well.

Must Read: The Complete Guide To Tam Coc In Vietnam: The Mysterious Caves Of North Vietnam

This is the sacred worship site from 2nd century AD, and it was constructed by the Cham king Satyavarman in 784 AD. This is one of the ancient Hindu temples in Vietnam and is dedicated to the goddess Yan Po Nagar, who is supposed to be the mother of the country. From 25 meters from here is another temple where the goddess is worshipped and it is believed that women with a child are blessed here. There are other towers too, dedicated to Lord Shiva, Lord Ganesha and so on. The traditional festival in Vietnam is Thap Ba and in this time the gods and goddesses are worshipped here.

This is mainly a cluster of ruined ancient Hindu temples in Hanoi Vietnam. Among the ruin, My Son is the most popular one and it was constructed in 4th to 14th century AD, and these temples are dedicated to Lord Shiva and other gods as well. The main and original building was made in the 4th century, and it was entirely made of wood and it got destroyed later on but King of the Champa kingdom rebuilt this place in stone. This place now has a world heritage site title by UNESCO, and it was destroyed by the Americans as they bombed in this place thus, all is left here are the ruins. However, the 70 temples still amaze people with its beautiful stone works.

This place is located at the heart of Saigon and was built by Indian merchants in the 19th century. The temple is famous for its navagrahas and each one is dressed in colored silk robes. You will get to see the pictures of Lord Shiva, Krishna, Goddess Laxmi and other deities of Hindu religion. This very place has been neglected for years but now it is considered one of the most beautiful temples in Vietnam.

This temple is located near the Phan Thiet City, and these towers were built in the honor of Lord Shiva. The main tower has the height of 15 meters and has many lingams of the god and other towers have 12 meters to 5 meters. Each year the Cham people visit this one of the oldest Hindu temples in Vietnam, and they offer their prayers and religious festivals are held at the time as well. One of the festivals is for rain, damp building festival, rija nuga and then the abstinence ceremony where the fishermen pray for the safe journey in the sea.

Image Source
This is a very simple Hindu temple in Vietnam and it’s really popular with the local people. Here you will find pictures of several gods and while you are visiting this place make sure to climb the rooftop to get the view of the whole city. This temple should be in your list6 when you are visiting Hindu temples in this country.

Suggested Read: My Khe Beach: A Handy Guide For An Extravagant Tour Of The Picturesque Vietnamese Land!

Image Source
This tower falls under the creation of Cham people and this place is for worshipping the Hindu gods and goddesses. This place was built in the 11th century and is a popular place to visit.

Now, it’s pretty much clear that where you should be heading to while in Vietnam for a unique experience and to seek the blessings of God. So, now, don’t think too much and plan a trip to Vietnam with TravelTriangle for a heartwarming holiday!